End of the Century: The Story of The Ramones

End of the Century: The Story of The Ramones (4/5) 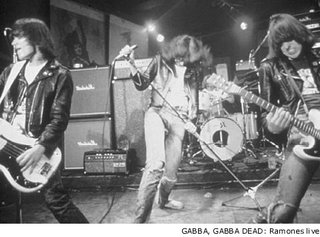 There are two kinds of geniuses: those who forge their intelligence through hard work and those who have a frighteningly precocious intuition. The Ramones had the latter. Somehow they managed adapt such gimmicks as replacing their last names with “Ramone” and all adopting a faux-fifties look and still seem one-hundred percent genuine. How a bunch of glue sniffers from Queens managed to create retro, yet revolutionary, American music is anybody’s guess. End of the Century never broaches the question of inspiration (although they do tell the stories behind several of their songs), and instead focuses on the drama of interband turmoil. As Dee Dee Ramone says, echoing ACDC, “it’s not easy being in a rock and roll band.”

The interesting thing about The Ramones is that their music managed to be both retro and forward thinking. Tommy Ramone described their music as “futuristic.” If you look at any of the retro sounding bands out there, from the 80’s revival to the well renowned Shins, virtually none of them are able to move rock music forward. In fact, the best of them sound as if they’re a really good band from a couple decades ago. You can make some great music working within older genres, but only geniuses are able to reshape old songs into a completely new genre. The Ramones were somehow able to make music that drew from the past, but updated it so you felt the same energy kids in the 1950’s must have felt when they first heard Buddy Holly on the Jukebox. The secret of The Ramones is that using the old blueprint just isn’t enough; you have to update the music in a way that speaks to an audience twenty-years later.

Like all famous rock bands since The Beatles, each member of The Ramones had a distinct niche: Joey was the innocent one; Tommy business minded and a bit too adult for the band (probably why he left early on); Dee Dee a jester and a thug; and Johnny…well, Johnny was a fucking dick. One of the centerpieces of the Ramones story is the feud between Joey and Johnny. As The Ramones were starting out Joey was the hopeless romantic responsible for most of The Ramones' love songs. He was also fighting an almost terminal case of shyness. It was around this time that Johnny stole his girlfriend from him. Joey held a grudge against Johnny for the rest of their career. The liberal Joey even wrote “The KKK Took My Baby Away” attacking the creepily conservative Johnny (at the rock and roll hall of fame induction Johnny thanks “God and George W. Bush”).

If you’re looking for a pick me up End of the Century is not it. Johnny, Dee Dee, and Joey all passed away in the last few years. Despite twenty years of hard work The Ramones were unable to become as successful in America as they had hoped, and looked forlornely across the Atlantic as punk exploded in England.

The shy, OCD, and often physically sick Joey is really the heart of the story. Before The Ramones, Joey was withdrawn and barely able to handle his obsessive compulsive disorder. He even checked himself into a hospital in hopes of stopping voices that made him repeat words. When he become the frontman for The Ramones he was able to build the confidence needed to rejoin the world. Joey even manages to stand up to the domineering Johnny. The story of the introvert who becomes an inspiration to millions is an unlikely testament to the power of music. What would Joey’s life have been like had he never been a Ramone? Would he have returned to the hospital? While End of the Century puts down that pesky rumor about how easy rock and roll is, I have a feeling the music gave Joey a life he couldn’t have lived otherwise. He was also generous enough to share that music with the rest of the world. What would the world be like without the music of The Ramones? I don’t know about you, but my life would be a whole hell of a lot more boring.