Well, it finally happened. Apparently Ted Stevens, the Senator from Alaska who became synonymous with pork barrel earmarks because of his "bridge to nowhere", is being investigated by the FBI. I'm a personal fan of Stevens, if only because he's certifiably senile and 100% grade A batshits insane. Just yesterday Ted Stevens' home was invaded by the FBI who took pictures of his residence. Apparently they believe additions he made to his home were actually paid for by VECO, an Alaska based oil-fields services and engineering company. Apparently VECO's founder, Bill Allen, was previously convicted for bribing state officials. At least that's the official story, but I like to think the FBI is actually looking for an illegal caches of a "series of tubes." Here's the original article.

It's not a big truck? Shit, I just failed my Internets 101 final. Oh, and if you're hosting your own rave.

What other show has so radically changed pop culture and what is acceptable on television? I like to make fun of Family Guy's lack of originality now and again but I'm glad The Simpsons made it possible for that show to exist. Oh, and judging from The Simpsons Movie box office they've also given South Park a slap down. That's right Cartman, respect their authoritah!
Posted by Tom Birkenstock at 7/29/2007 12:54:00 PM No comments: 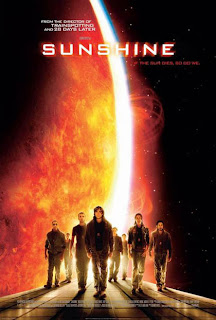 The keystone to Sunshine is the fact that once you strip away the sci-fi coveralls the film is essentially about a handful of people under very extreme circumstances. The central problem with extended space travel is the fact that after a year shoved into close quarters on a space aged Winnebago everyone is going to hate the guy next to him. I think 2001 had it right where they froze half the crew and made certain the remaining two had zero personality.

Apparently the same psychiatrists who okayed Lisa Nowak also approved the unhinged crew of Icarus II, whose mission is to reignite the dying sun. The ships psychiatrist has an unhealthy obsession with being “enveloped” by the sun on the ship’s observation deck, the ships botanist, played by Michelle Yeoh, has an unhealthy connection to plants, and the ships diametric young males, Capa (Cillian Murphy) and Mace (Chris Evans) get into a tussle without an apparent provocation. In their defense they’ve been living shoulder to shoulder for a few years now, and despite the inherent tension, each crew member acknowledges that everything else, especially their lives, is second to delivering the ship’s payload to the sun’s surface and saving the human race.

As expected from a Danny Boyle film, sci-fi is used as a jumping board for some philosophical musings as well as some overwhelming visuals. The guys behind the computers of Transformer should probably be ashamed of themselves after they see what can be accomplished with a fraction of the budget. Sunshine is absolutely gorgeous and takes full advantage of it’s location within the orbit of Mercury.

Fans of science fiction will be able to tell which parts have been cobbled together from movies past, but while this at times a drawback, it’s still incredible what Boyle can do within the confines of genre filmmaking. Those who are looking for a tense thriller in the vacuum of space will be satisfied and those who want something more cerebral will be able to rack their brains. Whether you’re a fan of Alien or Solaris, Boyle’s latest film should please not simply because it knows it’s working in the shadow of both but because it fully understands what made those films work and connects the dots between both kinds of science fiction.

Here it is in all its underwhelming glory, the new music video by the new reincarnation of The Smashing Pumpkins. The song is called "Tarantula."

Wondering who all those extra people are. Are they the new members of The Pumpkins? Probably not, they're probably there to appeal to as many demographics as possible. Billy Corgan, you marketing whiz kid you.