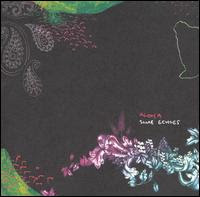 Who would have ever though that prog-rock would achieve an early 21st century revival in the form of the decades biggest indie rock? I would never have guessed that the bones of such forgotten dinosaurs as Yes, Queensryche, Electric Light Orchestra, and Genesis would be uncovered by those trendy (and impeccably dressed) kids of The Decemberists, Sufjan Stevens, and The Arcade Fire. Well, add one more to that list. They may not have the major label or the recognition of said bands but they don’t have a problem writing songs as good, if not better, than their populous counterparts.

Aloha hail from my home town of Cleveland and I did have the pleasure of seeing them play live once. At the time their music struck me as confused with a few more ingredients than needed. I’ll admit that I had read somewhere they were a post-hardcore band, which isn’t the case. Pre- Some Echoes Aloha experimented heavily with improvisation which probably explained my reaction. Some Echoes is their shot at a more pop oriented album. This doesn’t mean that every song is verse chorus verse, but it does sound more accessible than they did a year ago in Cleveland.

There are two things that make Aloha better than prog-rock. The first is the fact that they don’t profit in bombast. While a band like Yes seemed determined to use every damn track a studio could provide, each instrument on Some Echoes moves the song forward and seems necessary to the structure of the song. The masturbatory instrumentals are non-existent. For example, if this happened to be the mid-seventies, the arpeggios that appear at the end of “Brace Your Face” would signal the beginning of a ten minute instrumental representing the fairies bringing in the morning dew. Aloha, however, uses them as means to bring the song to a comfortable close.

The second thing is that the lyrics are abstract and don’t tell a story in the way that The Wall or Tommy or that forgotten masterpiece Kilroy Was Here. Such head-scratchers as a “pine cone tangled up in steel” (it makes sense when you realize what a monopine is) and “turn the lock with the hidden key” compliment the more conventional subject matter in “Ice Storming” and “Mountain.” It could be argued that the more straight forward “Ice Storming” wouldn’t resonate emotionally if it wasn’t for the more difficult songs and lyrics.

This brings me to the best connection between prog-rock and Aloha. Prog-rock wasn’t so much about songs as it was about albums. While each song on Some Echoes would sound great on its own, being a part of an album enhances their impact. In a world where technology has reinvigorated the single, it’s nice to listen to a full album that feels stronger than the sum of its parts. Like a drive home from a restful vacation, by the time you reach the final notes on Some Echoes you look back and realize it was the perfect journey.

If you’ve seen a preview for some sort of meta-fiction film (think Adaptation or Stranger Than Fiction) then no doubt you’ve thought to yourself, “you know, parts of ELO’s music was actually pretty damn catchy.” Well, imagine if ELO had done away with their self-indulgence and decided they were musicians and not JRR Tolkein…that’s Aloha.
Posted by Tom Birkenstock at 2/27/2007 01:49:00 PM No comments: