Wrap Up to Nolan's Batman Trilogy 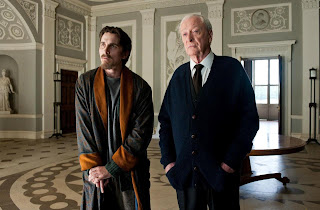 Over the course of his Batman trilogy, Nolan has produced three distinct films with a shared aesthetic.  Although each film takes place within the same canonical Batman universe, they take increasingly different positions on the political issues of the day.  Since Momento, his first full length film, Nolan has always been interested in pop-philosophy, and this did not change when he was given a much bigger budget to work with.  For this he gets a lot of credit.  But what has been disturbing over the course of the three films is their gradual drift into conservative ideology.

It's easy to read Batman Begins as a rebuke of America's foreign policy during the "War on Terror," what with its questions about justice and vengeance and where the line between them lies.  But all of these questions are brought up naturally and are carried along by characterization.  They fit right at home in a Batman movie.  And the fact that Batman is fighting against terrorists (albeit comic book terrorists) draws an obvious parallel between the events in the film and America's foreign policy.

A lot of these same questions came up in The Dark Knight, which is arguably a better film (I kind of wish I had bumped it up half a star in my rating) even if it doesn't handle the larger issues as well.  The part of the movie that people on the left criticized the most was Batman's cell phone hacking.  In the climax Batman hacks into all of Gotham's cell phones so he can use them as some sort of sonar devices in order to track down the Joker.  Plenty have noted the similarity between Batman's phone hacking and the actual phone hacking done by the government.  But while Batman's decision to essentially take over all the cell phones in Gotham is obviously a violation of privacy, it is arguably nowhere near as invasive as the NSA's search through the e-mailand phone conversations of American citizens.  Do we really want the government listening to the conversations between friends, family, and lovers?  First of all, the issue is simplified.  Of course, the audience wants Batman to broach the law because the Joker is about to blow up two boats.  Nolan has basically constructed a ticking time bomb situation, which also happens to be a situationthat has never occurred in real life.  (Besides, if you only have a matter of minutes, wouldn't the mad bomber just be able to hang for that short period of time?  The hypothetical sort of defeats itself.)  This is radically different from having the government creep into our personal communication network over the course of years.  And the movie's proposed solution, that we just blow up the capabilities when we're done with them, just doesn't cut it in a democracy where not only do you set a precedent, but that precedent can be later used by someone you wouldn't trust.  (This is why we must be just as critical of Obama when he skirts the law as we would have been with Bush).

Still, The Dark Knight comes up with some interesting questions, including whether we would be ready to disproportionately punish criminals if it means that we can save our own necks.  Unfortunately, Nolan loses all of his ability to pose interesting questions in the third installment, The Dark Knight Rises.  Where the first two films offered interesting queries about the world we lived in, for the third film I had to actively ignore some of meager attempts at social commentary in the third film in order to enjoy it.  Ultimately, I liked the film thanks to its ambition and the care it takes with its characters.  Still, Nolan's attempt to deal with questions of social justice and class wouldn't cut it in a freshman philosophy course, and they certainly don't work on screen.  As I mentioned in my review, the entire set up is unclear to begin with.  (Is it the underclass who are trashing Gotham or just the prisoners, or are they being treated as one and the same?)  Perhaps the most laughable line in the entire film comes from Selina Kyle's friend.  When the two of them are surveying the damage done to a ransacked mansion, Selina remarks that this was someone's house once, to which her acquantance says, "Now it's everybody's house."  Don't you see, people?  If we ask the wealthy to pay a marginally higher tax rate, then it will be total bedlam!  Granted, I'm not sure if this is exactly what Nolan is saying, but I don't think he has a clue as to what he is saying either.

The end of the film winds up pitting those in power, the police force and the wealthy aristocrat Bruce Wayne, against the prisoner population of Gotham.  The status quo must be set right.  This is an inherently anti-populist view of the world.  It is only those few elites who, in the old world, could exert control over the many that must regain control and set things to the way that they used to be.  Batman as an archetype can be used as a political symbol for the left or the right.  He does not inherently signify a particular ideology, so I don't think positioning him as a neoconservative is automatically wrong.  But I do wish that Nolan would acknowledge some of these issues, which he at least attempted in the second film. 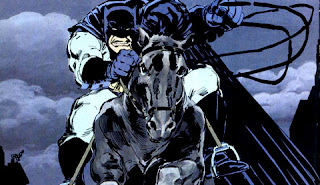 I’m reminded of Frank Miller’s work on The Dark Knight Returns, which asked us to question whether or not we should condone the actions of a vigilante.  Throughout the book, Miller uses news style interviews of Gotham’s citizens to show how different people project their own fears and prejudices on Batman’s actions.  Some decry his actions while others praise him.  And then, in the midst of these opinions, one man on the street gives the following viewpoint: “Batman? Yeah, I think he’s a-okay.  He’s kicking just the right butts – butts the cops ain’t kicking, that’s for sure.  Hope he goes after the homos next” (45).  The line is brilliant because the reader can feel himself agreeing with the man until the brutally bigoted last sentence.  Here, Miller asks us to question populism in a more complex way than Nolan.  At what point should we shield the minority from, as the philosopher De Toqueville called it, the “tyranny of the majority”?  But Miller teases out these issues in a couple of sentences when Nolan couldn’t do so over the course of nearly three hours.  It is not that the issues that Nolan brings up shouldn’t be discussed.  It is that these issues should be discussed with nuance, vigor, and intelligence.

On the internet people like to bandy about the word pretentious, but it is often used incorrectly.  When people call a work of art pretentious, what they really mean is that the film is too difficult or esoteric for them.  The Oxford English Dictionary defines “pretentious” as “Attempting to impress by affecting greater importance or merit than is actually possessed” (OED).  So a pretentious work of art is something that thinks it has more to add to the conversation than it actually does.  The Dark Knight Rises is often pretentious in the truest sense of the word: it is not nearly as smart as it thinks it is.  But, I would still rather watch something with a pretense to greatness than a film that doesn’t even try.  I might not love The Dark Knight Rises as much as I wanted to, but I do respect its ambitions.
Posted by Tom Birkenstock at 8/04/2012 06:03:00 PM No comments: