Foxygen - We Are the 21st Century Ambassadors of Peace & Magic 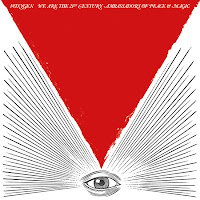 Contemporary rock music has been decried as an anachronism in the world of hip hop and electronica, the sonic equivalent of literature’s “dead white men.”  All the trendy blogs and publications (or wannabe trendy blogs and publications) have produced at least one article attacking modern rock music for being stuck in the past.  But these same publications also happen to reward rock musicians who have an uncanny ability to ape past rock luminaries.  I won’t go too far down the rabbit hole on the subject of “originality,” but I will suggest that if you make music using a computer instead of a guitar this doesn’t make you any less indebted to those who came before you. (I’m often surprised by how much electronic dance music sounds like it could have been made fifteen or twenty years ago).  The problem with Foxygen’s album, We Are the 21st Century Ambassadors of Peace & Magic, isn’t that the band wears its influences on its sleeves.  It’s that the musicians have yet to figure out how to smoothly integrate their influences into a satisfying sound.

Foxygen’s songs can be divided into two camps: one, contained pop songs and two, messy rock collages.  I’ll start with their smart, bite sized tracks first, because they are the most immediately satisfying moments on the record.  The album opener, “In the Darkness,” melds the melodies of the Kinks with the horn section borrowed from Sgt. Peppers.  It’s a memorable and satisfying beginning, and it foreshadows the album’s fulcrum, “San Francisco.” (It seems as if a band like Foxygen is almost contractually obligated to name check San Francisco).  With call and response lyrics like the following, “[boy:] I left my love in San Francisco / [girl] That’s okay, I was bored anyway,” Foxygen gets to showcase some humor and suggest that the band can fit both homage and caricature into the same song.

By contrast, Foxygen’s longer, more freewheeling songs are both more ambitious and messier.  It doesn’t help that it’s on these tracks that vocalist, Sam France, tries his best to channel his rock and roll heroes.  There’s a moment on “No Destruction” that sounds less like a shout out to Bob Dylan than it does a Saturday Night Live impression gone wrong.  At their worse, these longer songs sound like snippets of ideas haphazardly strung together without thought to transitions or continuity.  On the song, “Oh Yeah,” Foxygen splice a Jackson 5 song into the middle of a T. Rex number, a combo that should work, but here it sounds random, like they’re flipping back and forth between two radio stations.

Foxygen’s intense knowledge of rock and roll’s back catalogue is at times reminiscent of sampling in hip hop.  But where the best hip hop DJs manage to take disparate sounds that have no business inhabiting the same song and yet somehow make them sound like perfect compliments, here Foxygen takes sounds that should work together and somehow manages to make them clash.  The exception is perhaps “On Blue Mountain,” which moves from one idea to the next, taking unexpected detours when necessary, but all the while building towards something greater than its parts.  This song represents the Platonic ideal of Foxygen in practice.  Obviously, this band is talented, and they might even turn in a masterpiece if only they could harness their gifts for the greater good of rock and roll.
Posted by Tom Birkenstock at 3/30/2013 10:17:00 PM No comments: 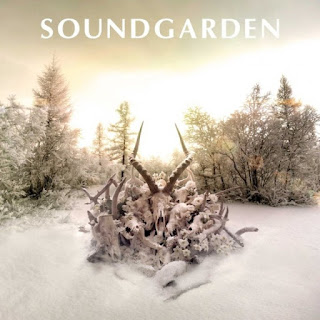 I’ll admit to more than a little trepidation when Soundgarden announced that they would be hitting the 90s nostalgia circuit and eventually release a new album.  Despite the fact that a number of classic bands over the years have in the past decade started recording new material that has actually strengthened their legacy – from Mission of Burma to Dinosaur Jr. – I still didn’t have the same hopes that Soundgarden would follow in their footsteps.  There are two seemingly contradictory reasons for this. One, Soundgarden stands as one of the most commercially and creatively successful bands from the 90s, and they arguably never put out a bad album.  Even Chris Cornell said he worried about tarnishing their legacy, and I was inclined to agree with him.  Two, by the time he, now infamously, teamed up with Tambaland for his last solo album, Cornell, who had become the most visible face of the band, had all but destroyed his goodwill.  It always struck me as odd that Cornell would sink so low.  After all, he was a principle songwriter in the band and his first solo album turned out to be strong effort.  I was content to just listen to Soundgarden’s handful of albums over and over again.

But I’m happy to announce that all fears have been swiftly vanquished by Soundgarden’s triumphant reunion album, King Animal.  If King Animal doesn’t have the same impact as Soundgarden’s one two punch, Badmotorfinger and Superunknown, then that’s a testament to the impossible quality of those two albums than a reflection on the latest album.  In fact, listening to King Animal is a little like falling back in love with grunge music, a genre that rock radio has done its best to water down with helpings of imitators.  But the fact that King Animal handily decimates memories of Creed and Nickleback tells you all you need to know about the album.

Unlike other grunge contemporaries, like Nirvana or Mudhoney, Soundgarden was less devout to punk.  Instead their music felt like the natural inheritors of 70s arena filling rock gods, Led Zeppelin.  But unlike some of those bands in the 70s and 80s, Soundgarden always knew to avoid excess when necessary.  At a time when garage rock is making something of a small resurgence, it’s actually refreshing to hear a band that sounds like its aiming for those sitting the cheap seats.  And there are plenty of songs on King Animal that have that epic feel, as if Thayil is conjuring a symphony out of his six strings.  During songs like “A Thousand Days Before” each band member seems completely in sync with one another until the final horn crescendo.  The album reminded me that Soundgarden really understood how to do big without tipping over into bombast.

King Animal is also a testament to Soundgarden’s ability to paint in the corners.  While the band has always been able write pop hooks and to go heavy when necessary, they also are comfortable in the studio, adding layers to their music without diminishing its impact.  When a chorus spins around again, the band might use a slight effect on Cornell’s vocals or let the song devolve into chaos during the bridge.  There are always more details for a listener to sift through, and their ability to match an attention to detail with heavy hooks has always made Soundgarden’s music just as appropriate for your car’s stereo as it is for an expensive pair of headphones.

That’s not to say the band hasn’t changed in the intervening years.  (Although the fact that “Non-State Actor” sounds like a caged animal trying to get free shows they’ve maintained some of their rough edges).  Cornell’s voice isn’t as piercing as it once was, even if it has held up surprisingly well.  The songs themselves sound like they were written by veterans rather than young bunks.  But instead of running from age, the band has come to embrace growing older.   Singing about wallowing in “mud and blood” and searching with his “good eye closed,” Cornell’s lyrics often had a suitably Old Testament heaviness that matched the band’s predilection for the lower end.  But here Cornell finds the space to ruminate on impending middle age.  On “Bones of Birds” he sings, “Time is my friend 'til it ain't and runs out / And that is all that I have 'til it's gone,” suggesting that Cornell is aware that everything we have, our talents, our relationship, and our lives all come with an expiration date.  Tellingly, the album closes on the song “Rowing,” which relies on the harmonies of old time work songs.  Together the band sings, “Don't know where I'm going, I just keep on rowing / I just keep on pulling, gotta row.”  And if that isn’t a perfect approach to doing what you love and living your life, then I don’t know what is.  Let’s hope it means that King Animal is just the first step in a new era for Soundgarden.
Posted by Tom Birkenstock at 3/05/2013 01:23:00 PM No comments: