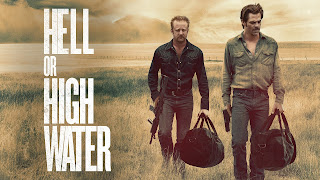 Because of its ability to reflect many of America’s founding American myths, the Western genre has become inherently political. Whether it’s High Noon’s examination of civic duty and community or The Man Who Shot Liberty Valance’s look into the shaky line between judicial and extra-judicial violence, the Western seems to automatically circle back to questions of nationhood, politics, and economics. It’s clear early on that the bank bailout and Great Recession weighs on the mind of David Mackenzie, director of Hell or High Water, a modern day Western.

Hell or High Water begins with an impressive 360 degree pan of a small West Texas town, and we can make out some graffiti that says something along the lines of “Three tours in Iraq, where’s my bailout.” Mackenzie’s camera likes to linger along rusted out industry and those predatory advertisements for home loans you can find in depressed areas. The movie starts off with two bank robberies perpetrated by two brothers, Toby and Tanner Howard (Chris Pine expanding his career beyond summer spectacles and Ben Foster cementing himself as an important character actor). The two have been crossing the state robbing banks, only taking loose bills from the cashier till to make sure their gains are untraceable. They also rob only branches of Midlands banks.

You can probably piece together from this description that Midlands bank has screwed over the brothers’ family, and they’re extracting money in return. In this case, their late mother, suffering from some sort of illness, was forced into taking out a reverse mortgage under conditions she could not reasonably repay, which has delivered the family land into the hands of Midlands. The brothers plan on paying off their debt with the bank’s own money.

One of the many joys of the film is its refusal to bend to the familiar molds of the genre (which is only possible because screenwriter Taylor Sheridan is already minutely familiar with the heist and Western genres). For instance, of the two brothers, Tanner is clearly unhinged, but this doesn’t lead to the dissolution of their relationship or other obvious plot points. There’s an unspoken bond, or perhaps a bond spoken through the male language of quips and insults, that the two brothers will forgive each other for just about any slight or mistake.

This brotherly relationship is mirrored by the two Texas Rangers on their tale, Marcus and Alberto, played respectively by Jeff Bridges and Gil Birmingham. Bridges is as charismatic as ever, even if he has become less intelligible the more he stars in Westerns (in a few years expect him to turn in a performance composed entirely of grunts). Throughout Marcus chides Alberto, the insults themselves are usually aimed at his Comanche heritage. Just as with the brothers, these insults are a means to both cloak and convey affection. The film divides our loyalties evenly. We know we should side with the lawmen, but you can’t help and hope the brothers make it through with their plan. 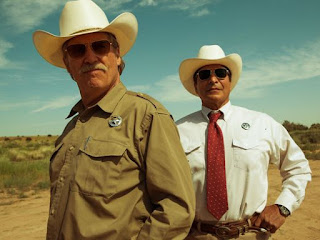 One of the film’s centerpieces happens to be its dialogue. We’re given a few glimpses into the history of these characters, but their interactions with one another more clearly define these people than their backstories. (It’s become something of a lost art in film to develop characterization through choices and dialogue rather than a tragic backstory crammed into the story with the grace of a backhoe loader). The film is both confident enough to take little detours with side characters and yet eager enough to please to make these conversations fun for the audience. Some of the best lines of the film are actually given to two waitresses who have three scenes between them.

The politics of the film are clear, but there’s enough nuance here to make sure the message is more than window dressing. Hell and High Water is about banks screwing over the working class, but it’s also about intergenerational poverty and how streams of wealth flows away from the poor and working class. The film isn’t just about inequality; it’s about how inequality is produced by squeezing capital from those at the bottom into the maw of those at the top. During the course of the film we see the beautiful southwestern landscape alongside dried up towns, places where one character openly wonders how anyone makes a living there.


Hell and High Water delivers as an immensely entertaining genre flick in a year full of immensely entertaining genre flicks. (Those summer blockbusters may have let you down in 2016, but if you move down to low and mid-budget movies, then there have been some real treats). The film smartly handles the issues of inequality and the evaporating middle class, but even many years from now, when we live in a Star Trek-like utopia where money no longer exists, Hell and High Water will still entertain as a top tier modern day Western.
Posted by Tom Birkenstock at 8/16/2016 12:02:00 PM No comments:

Please Be Honest by Guided by Voices 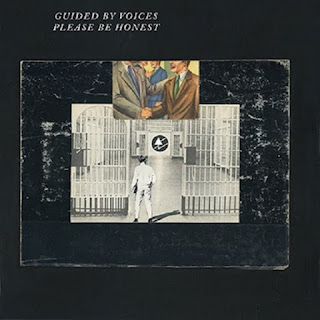 How do you define Guided by Voices? Do you have to include members of the “classic lineup,” excluding everything after Under the Bushes Under the Stars (1996) and before the reunion albums (2012)? Is Guided by Voices even a “band” or is it just an outlet for Robert Pollard who decides to let other songwriters play in his sandbox now and again? Is it just a name? This leads us to a tautology: It’s a Guided by Voices album because it’s released under the Guided by Voices moniker. Robert Pollard, whose work has been released in a seemingly endless series of bands, seems to believe that an album is a Guided by Voices album simply because he has said so. Well, actually, he has said that the songs off the latest GBV release just felt like GBV songs, despite the fact that he handles all of the instruments on the recording.

I have to admit that while Pollard’s latest GBV album, Please Be Honest, put me into an ontological conundrum, he has a point about the songs feeling like GBV songs. I don’t think the latest GBV is up to the standards of the best of the reunion albums, but there’s enough here to satisfy those who don’t have the patience to sift through every Pollard-related album released in a year. And while Please Be Honest might be guilty of some of the common complaints about Pollard’s songwriting--unevenness and a lack of quality of control--it still offers up some great songs for GBV die hards like myself.

Please Be Honest opens with two killer tracks, “My Zodiac Companion” and “Kid on a Ladder.” The former builds out of a sparse guitar and off-key singing by Pollard but continues to layer on strings and drums until Pollard has fashioned a mini-epic in just over two minutes. Like the best of Pollard’s songwriting, “My Zodiac Companion” gives you just enough to want to return again and again. “Kid on a Ladder” is the first showcase of Pollard’s interest in playing around with drum machines, which make another appearance on “Unfinished Business” during the album’s second half. The former though is one of those perfectly crafted pop songs you can expect to appear at least once on any Pollard released album.

The rest of the album’s A-side is less successful. A fifteen-song album is short for Guided by Voices, which means you might have less patience for some of Pollard’s basement tapes noodling, especially when it comes to filler like “Sad Baby Eyes,” which might have worked on a masterpiece like Alien Lanes, but here just trips up the flow of the album. The exception is “The Grasshopper Eaters” (perhaps a play on the lotus eaters from The Odyssey). Here Pollard does a superb job of playing with atmosphere and tone, and the track is somewhat reminiscent of some of the best experimental work of another Ohio band, Pere Ubu.

Pollard hides some of the best songs on the album’s B-side. “Hotel X (Big Soap)” once again channels the Who by stuffing several musical movements inside of three minutes before a surprise ending made out of a sampled high school band. “Hotel X” is followed by two other major highlights, “I Think I’m a Telescope” and the title track. The album is capped by yet another great final track, which Pollard has become an expert in crafting at least since the 2012 reunion. (Each reunion album has ended in an appropriate blast of energy whereas earlier GBV albums often just sort of ended).

So the worst of my fears regarding Please Be Honest have not come to pass. Pollard did not just cynically use the GBV name to scare up some extra cash to buy Jose Cuervo and PBR. The album isn’t as strong as the last six under the GBV name, but it has its charms, and by whatever definition you choose to use, it at least “feels” like Guided by Voices.
Posted by Tom Birkenstock at 8/03/2016 03:05:00 PM No comments: