The Last Command by Timothy Zahn

The Last Command by Timothy Zahn (4/5) 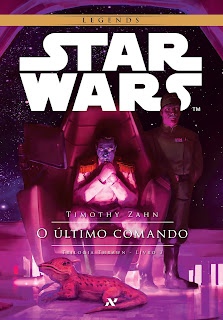 Here we come to the final installment of the “Thrawn Trilogy” as Zahn’s series of novels have come to be known. It’s a largely satisfactory ending aided by Zahn’s deft plotting and ear for the dialogue and cadence of Luke, Leia, and Han. In the previous installment, Dark Force Rising, Grand Admiral Thrawn had not only gained control over the “Katana Fleet,” a fleet of ships thought to have been lost or destroyed, but also started manufacturing cloned soldiers to man those ships, shifting the balance of power in the galaxy in the process.


Thrawn’s bolstered forces make the Empire a reinvigorated adversary, and Zahn smartly accomplishes this without using another superweapon as a crutch. While the New Republic deals with this new threat, Leia prepares the birth of her twins and Luke questions which side Mara Jade, former assassin for the Emperor turned smuggler, will ultimately join.


In the first part of the novel, Luke conscripts Talon Karrde into helping him track troop movements for the New Republic. Karrde, a smuggler with a heart of gold, stands as one of Zahn’s more indelible creations, and here he showcases Zahn’s ability to invest his plots with clever moves and countermoves. In fact, Karrde’s subplot might be my favorite element of the entire novel. He must form a shaky alliance between normally competitive smugglers in order to provide Luke and the New Republic with the intelligence they seek while also keep an eye on Thrawn’s attempts at seeding dissention within the group.


Zahn’s other and more popular contribution to the wider Star Wars Expanded Universe is of course Mara Jade, a Force sensitive former assassin for the Empire.  Throughout the trilogy, she seems hell bent on finally killing Luke who she blames for the death of the Emperor. In a risky move, Luke decides to trust her and bring her along on their mission to destroy Thrawn’s hidden cloning facilities. Because of Jade’s work with the Empire, she’s the only person with enough knowledge to lead Luke, Han, and the rest to where the clones are being produced en masse. They even defy the New Republic by sneaking Jade off of Coruscant where she has been detained because of her ties to the Emperor and newly discovered evidence that points to current collaboration with the Empire.


Jade has apparently become a fan favorite character, and she gives us another fully rounded female character other than Leia, something Star Wars needs more of. She’s an intriguing character because she seems to have lost her place in the world following the death of the Emperor. But it is a little silly how quickly Luke decides to trust her, especially considering the fact that she openly states multiple times that she plans on killing him. In fact, we’re just supposed to trust her because Zahn has decided that she’s going to be one of the good guys, which kind of sandpapers her edges in a way that makes her character less interesting.


When the New Republic detains her because they receive information from an Imperial agent that she’s still working for the Empire, Han steadfastly defends her innocence merely because the agent is likely untrustworthy. Sure, but if we’re going to think about the issue rationally, it would be idiotic for New Republic to allow a potential Imperial spy and former aid to the Emperor to freely move about their government headquarters. Zahn seems to ask us to trust Mara simply because he knows in the end she’s one of the good ones.


It’s interesting to see ways in which The Last Command contradicts canonical information from subsequent films. Bringing in the idea of clones, which at this point were nothing more than a quick allusion by Obi-Wan in A New Hope, smartly unweaves the seemingly definitive conclusion to the Empire at the Battle of Endor. But it’s suggested in the novel that the cloning process means the clones go insane after a couple of years, information completely missing from the prequels, likely because Lucas decided to just ignore this version of events. It’s a nice example of how the Star Wars EU never truly was canon. (There’s also no mention of Kamino as you might guess).


Eventually, Luke and Mara face off against insane Jedi clone C’baoth while the forces of Admiral Ackbar try to survive one of Thrawn’s traps. The novel ends with the remnants of the Empire more powerful and the New Republic a little weaker, a finale that guarantees the detente will continue. The expansive Star Wars EU wouldn’t have had the impact that it did without Zahn’s trilogy. He clearly understood Lucas’s creation, and when reading his novels, I often felt like I was visiting old friends.


It’s hard to imagine now, but Star Wars had a decade-long absence from popular culture, and before the first book of Zahn’s trilogy, we last saw our heroes froloking to the sounds of that catchy “Yub Nub” song on the moon of Endor with a bunch cuddly teddy bears. Zahn’s trilogy started feeding fans information about where our characters ended up after the films ended, and he deserves credit for both demonstrating that there are still plenty of great stories to tell in the galaxy far, far away and that there was a pretty big appetite for this material. The Star Wars novels of 90s, Zahn’s as well as others, could often be found on the New York Times bestseller list. If it weren’t for the popularity of these books, I wonder if we would even have the prequel trilogy. (Whether that’s a good or a bad thing, I’ll let you decide). 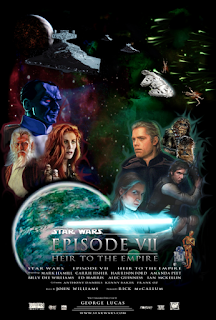 In fact, the Thrawn Trilogy had become so popular before Episode VII came out that plenty of people wanted Disney to straight up adapt Zahn’s novels. Ignoring the fact that the Thrawn Trilogy takes place five not twenty years after Return of the Jedi, I’m glad Disney didn’t go that route.


I obviously enjoyed the Thrawn Trilogy, but it also clearly has different goals than The Force Awakens. Zahn’s clearly trying to stretch out the battles fought in the original trilogy so that other authors can work within a world that looks much like it did in Episodes IV, V, and VI. I actually don’t think The Force Awakens goes far enough in differentiating itself from the original trilogy, something Lucas managed in the prequels. (One of the successes of the prequel films was the fact that Lucas created a world and conflicts that were different enough from his original creation while also still feeling like they’re a part of the Star Wars universe). But adapting the Thrawn Trilogy would have only compounded this problem. Zahn doesn’t even manage to differentiate the new villain from the Empire in any way.


There also seems to be less at stake in the Thrawn Trilogy. I’m not necessarily talking about that dumb extra-large Death Star used in The Force Awakens. Lucas had established the main Star Wars cycle as an intergenerational tale, but Zahn’s novels basically serve as an addendum to the events of the original trilogy. The death of Han also raises the emotional stake in a way that Zahn’s novel doesn’t accomplish. (In his defense, it would be kind of a dick move to kill of Han Solo and make it impossible for any other Star Wars EU writers future use of the character.)


And while Thrawn’s a great villain, he never gets to be as menacing as he could be. He never interacts with the core protagonists, and in the end he’s killed by the Noghri, aliens who discovered that the Empire has been lying to them in order to gain their loyalty. It works within the context of the novel, but in a film it would come across as anti-climactic. (Hell, I was kind of hoping that Thrawn and his stooge, Pelleon, would make it out to fight another day.)


The less said about the clone of Luke that’s dropped into climax of the novel, the better.

Still, there are things Disney could learn from the Thrawn Trilogy. You don’t need another stupid, stupid superweapon to create a threat. That’s a crutch used by plenty of lesser authors who followed in Zahn’s wake. I would also love to see Mara Jade or a Mara Jade influenced character in the new trilogy. We need more female characters who are unaffiliated with either the villains or the heroes. Hopefully Disney will borrow from the Star Wars Expanded Universe while not forgetting to blaze their own path.
Posted by Tom Birkenstock at 3/19/2016 07:26:00 PM No comments: