The Courtship of Princess Leia by Dave Wolverton

The Courtship of Princess Leia by Dave Wolverton (2.5/5) 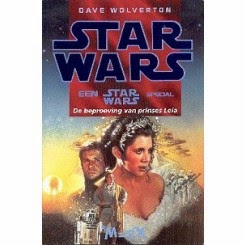 With the exception of the books from the X-Wing series, as a kid my favorite Star Wars novel happened to be The Courtship of Princess Leia.  I don’t think this particular book gets a lot of respect from Star Wars fans these days, so in my bid to further explore the Star Wars Expanded Universe, I decided to revisit the continuing story of Han and Leia’s romance to see if my twelve-year-old self was onto something or if the general consensus was correct.  It turns out that there are some potentially interesting ideas in The Courtship of Princess Leia, but they’re mostly marred by poor execution.

Like most early Star Wars novels, The Courtship of Princess Leia begins by dealing with the detritus of warlords that have risen out of the destruction of the Galactic Empire.  While the has started to reestablish itself, it’s still looking at a series of lengthy and costly battles against these remnants of the Empire.  A possible solution presents itself by the arrival of a delegation from the Hapes cluster, a wealthy and powerful collection of systems that offers to aid the New Republic in its fight, but on the condition that Princess Leia marries the Hapan Prince Isolder.  Naturally, this doesn’t sit well with Han Solo.

Many readers might rightfully scoff at the idea that Leia would drop her affections for Han Solo to marry a dreamy prince.  The author, Dave Wolverton, does suggest early on that Leia might marry the Prince out of a sense of duty to the and the lives that might be saved by a potential alliance with the Hapan cluster.  But this tact is quickly dropped, and it appears that Leia is genuinely falling in love with the Prince because he’s totally hot.  In one of the novel’s sillier conceits, because of planned breeding everyone from the Hapan cluster are super attractive. (There’s a weird undercurrent of evolutionary psychology in the novel.  Later, Prince Isolder suggests that monarchy is a suitable form of government because it pairs the best and the brightest and their brood as rulers, something that struck me as really silly even when I was twelve).  The Hapans are also a matriarchal society, so if Leia were to marry Prince Isolder, she would eventually become queen of the Hapans.

Out of jealousy and desperation, Han enters a high stakes card game in the bowels of Coruscant and ends up winning an entire planet, Dathomir.  I do kind of love that Han could win an entire planet from a card game, just like he apparently won the Millennium Falcon.  But when even this doesn’t win over Leia, he eventually abducts her and takes Leia to his newly acquired planet.  The kidnapping plot might, rightfully, leave a poor taste in many readers’ mouths.  While there is common trope of women falling in love with their captors (which may very well go all the way back to Tristan and Iseult), I think this cliché has become more difficult to justify in the new millennium.

It’s when Han and Leia get to Dathomir that things get really bizarre, mostly for the better.  Dathomir is under the control of the Warlord Zsinj, making it impossible for Han and Leia to flee the planet after making their way through an Imperial blockade.  They’re followed by Luke Skywalker and Prince Isolder who have teamed up to retrieve the Princess.  On the surface of Dathomir, Han, Leia, Luke and Isolder have to contend with matriarchal clans of Force sensitive women.  In fact, there is a particular clan of witches that have been threatening other inhabitants of Dathomir and are seeking an alliance with Zsinj in order to leave the planet and wreak havoc across the galaxy.  Oh, and these clans of women not only ride Rancors, but they also appear to keep men like property.  This is the kind of pseudo-feminism that could have only occurred in the nineties.  When one of the women decides to keep Prince Isolder as a mate, the book threatens to turn into the Futurama episode “Amazon Women in the Mood.”  In other words, Wolverton’s idea of feminism not so coincidentally doubles as a male fantasy.  Still, the concept of Rancor riding Force witches is pretty damn cool.  And while it might diminish Luke’s unique status in the universe, the invention of the Witches of Dathomir manages to expand the fantasy/mythology aspect of Star Wars when so many authors at the time approached the world strictly through a sci-fi lens.

I probably genuinely enjoyed The Courtship of Princess Leia as much as I rolled my eyes.  But Wolverton’s novel has contributed to the larger mythology of Star Wars.  The Witches of Dathomir have become a permanent, canonical part of the Star Wars Universe thanks to their inclusion in The Clone Wars TV-show.  And the one thing I remember enjoying about the novel was the fact that C-3PO does whatever is in his power to help out Han Solo win over Princess Leia, including uncovering Han’s supposed aristocratic ancestry and writing and performing a song about the greatness of Han Solo.  So if you ever wanted to read about C-3PO playing wingman to Han Solo, then this is the book for you.
Posted by Tom Birkenstock at 1/10/2015 04:31:00 PM No comments: