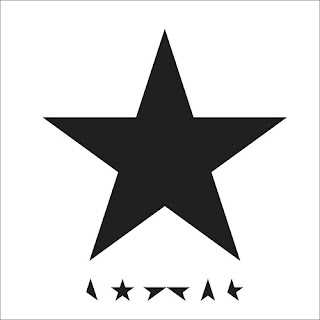 On The Next Day, David Bowie self-consciously looked back through his legacy. The repurposed “Heroes” cover art and the songs about youth (both of unnamed protagonists as in “I’d Rather Be High” and Bowie’s own as in “Where Are We Now?”) signaled Bowie’s intent on sifting through memories and taking stock of a life fully lived. On Blackstar, his follow up album, Bowie seems more interested in breaking from the past and once again making a massive leap into the unknown.


Always the consummate collaborator, Bowie this time not only brought in his long time producer Tony Visconti but also enlisted the work of the Donny McCaslin Quartet, a group that melds jazz and electronica. Because he has devoured so many genres over the decades, jazz isn’t necessarily new to Bowie. “Aladdin Sane (1913-1938-197?)” from Aladdin Sane and “Bring Me the Disco King” from Reality immediately spring to mind. While Blackstar demonstrates Bowie’s most sustained engagement with jazz, it should come as no surprise that Bowie tackles the genre from his own askance perspective and fully fleshes it out with his ever shifting personality.


In addition to jazz, 90s trip-hop and ambient electronica are equally important to Blackstar’s sound. The eponymous album opener is a nearly ten minute opus populated with mythic, future-fantasy lyrics that sound as if they were assembled from William S. Burrough’s famous “cut up” technique that Bowie has been known to use. Set to a stuttering drum beat, Bowie sings of the “villa of Ormen” in the cadence of a Gregorian chant. The archaic lyrics showcase Bowie’s interest in medieval European culture and narratives, but here they brush up against electronic arrangements resulting in something that both sounds like it always was and will never be. If past and present are two similarly charged magnets, then “Blackstar” stands at its very center. A little over the halfway mark, “Blackstar” takes a turn towards the theatrical, from a Broadwayesque crescendo into a slinking 1930s cabaret number. As if that weren’t enough, Middle Eastern sounding woodwinds and strings eventually creep into the proceedings. Within ten minutes, “Blackstar” seems to be reaching towards everything at once, but still maintains a cohesive identity all its own, much like Bowie himself. 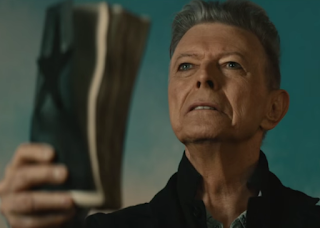 As expansive and experimental as “Blackstar” sounds, it’s still more inviting than the more streamlined “‘Tis a Pity She Was a Whore” and “Sue (Or in a Season of Crime).” Both songs employ polyrhythm and syncopation to unsettle the listener. While the Donny McCaslin Quartet attack their instruments, Bowie layers his patented croon over the carefully controlled chaos. Donny McCaslin and company deserve a good deal of credit for their aggressive playing, giving the songs real bite, but both tracks were originally demoed by Bowie himself prior to anyone else’s involvement, and they showcase his real ability to really investigate disparate genres and then make them his own.


Letting his quintessential Britishness poke through, Bowie borrows the title of “‘Tis a Pity” from a seventeenth-century English play about an incestruous tryst between brother and sister, certainly an allusion and subject matter you aren’t going to find from any other rocker. Likewise, the lyrics of “Girl Loves Me” are partly in the style of Nadsat, the fictional dialect developed by British author Anthony Burgess in his dystopian novel, A Clockwork Orange. As if these disparate influences weren’t enough, “Sue” and “Lazarus” in particular play up the album’s noir feel, which is also echoed in the album title and artwork. At only forty minutes in length, Blackstar contains multitudes. The album name is actually supposed to be styled as ★, and so much of the work sounds like an artist trying to slip the constraints of language and rigid rationality.


The album’s last two tracks, “Dollar Days” and “I Can’t Give Everything Away,” are a little friendlier than those that precede them. Both are midtempo pop songs driven by indelible melodies. After the dark collage of music that constitutes most of the album, the final two tracks offer a little sliver of light and some emotional release. This tension has always been within Bowie’s music. From the beginning, the light has always kept darkness at bay, if just barely. And here Bowie is in his late sixties and reinventing himself once again. In “Dollar Days,” he sings, “I’m dying to / Push their backs against the grain / And fool them all again and again,” a mantra for both this album and Bowie’s life. I picked up Blackstar on the day it came out, and after listening to the album repeatedly, I thought to myself, “I can’t wait to see what Bowie is going to do next.”


But, of course, we’ll never know. As everyone knows by now, David Bowie died of cancer two days after the album was released. In retrospect, it’s clear that the album was written while Bowie was contemplating his own fragile mortality, and death and dying are found throughout the album, something I vaguely recognized when listening, but I mostly chose to ignore because the idea just seemed unfathomable at the time. Producer Tony Visconti called Blackstar Bowie’s final parting gift, an idea present in the lyrics and title of the final song, “I Can’t Give Everything Away.” The album speaks to Bowie’s generosity of spirit--that, in the end, he poured out nearly everything he had for his art and his fans. And who but Bowie could craft a final work of art that brilliantly looks towards the future, exploring new sounds and ideas all the way to the end.


I first became interested in Bowie when I was about eighteen and I bought Ziggy Stardust. Before then, I had heard his radio hits, but I had never really delved fully into his work. Listening to the album at the time felt like a world opening up to me. It was catchy, theatrical, campy, and mercurial in the way only Bowie could manage. Back then, gas was cheap, and I drove around in my shitty, bluish-green Ford Escort nearly non-stop, and for some time Ziggy Stardust became my soundtrack to the woods of rural Ohio.


From then on, I was hooked. The first paper I wrote in college that I was somewhat proud of was written for my freshman composition class, and it focused on the questions of gender and sexuality in The Rise and Fall of Ziggy Stardust and the Spiders from Mars. It was only through Bowie that I came to more fully comprehend--rather than merely “know”--the fluid nature of gender and sexuality. 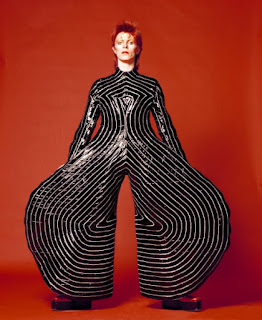 Before listening to Bowie, my understanding of these concepts were rather rigid and staid. I was brought up in an evangelical household, and while I had abandoned much of the regressive politics of that culture by the time I was a senior in high school, I had yet to fully come to terms with homophobic thought and language. I was still quasi-religious at the time, but I couldn’t quite wrap my head around why homosexuality was supposed to be a sin. I reasoned that if it was a sin, then it must have been on the level of lying or some other kind of act that wouldn’t imperil your soul. But I also used the occasional unthinking homophobic slur. While I was moving in the right direction, I still had too much of a regressive attitude towards gender and sexuality. Bowie’s music allowed me to become more open and accepting.


In other words, Bowie’s music did what great art is supposed to: it transformed the way I saw the world. I realized that many of the harmful and bigoted ideas I had about others were incommensurate with the person I wanted to be, and they needed to be discarded. I can honestly say that listening to David Bowie gave me empathy and understanding. His music has since weaved itself into my life. Whenever I’m on a long plane ride, I always listen to the entire Berlin trilogy, and I even incorporated music from the “Heroes” album into my wedding ceremony.


Bowie’s musical contribution is vast. In his discography there are universes within universes that I suspect I’ll be exploring from here until my dying day. His output in the 70s is unparalleled, but he continued to surprise. There’s a lot more to Bowie than the way he played with gender and sexuality. Questions of identity were central. The truism about Bowie was that he was a chameleon, but every new personae still felt like it was somehow still him. He always is and never was David Jones, David Bowie, Ziggy Stardust, The Thin White Duke, and Aladdin Sane. He’s like a postmodern Bodhisattva.

In fact, I had a hard time reconciling the Earthling era David Bowie that populated the airwaves when I was growing up with the 60s folkie he started off as. Over time, Bowie’s unceasing transformations started to become one of his constants, a concept he played with by purposefully reemploying the iconic “Heroes” cover for The Next Day. His contributions also spanned far more than his music. He was an incredible stylist and a great actor. Who other than David Bowie could have pulled of the outrageous fashion of Jareth the Goblin King in The Labyrinth? But he could also go for subtlety as in The Prestige and The Man Who Fell to Earth or play with his iconography like he did in an episode of Extras.


In some ways, there’s a Bowie for everyone. But I think that for fans, all Bowies are necessary. After buying Blackstar, I found myself scouring the internet for stories about Bowie, and I spent hours perusing Consequence of Sound’s ordering of every Bowie album from worst to best where they staunchly defend his much maligned work in the eighties. I disagree with plenty of their reviews (soon I’m certain that Reality is going to get a reassessment), but the fact that the critical attitude of Bowie’s oeuvre can shift so dramatically demonstrates that when it comes to Bowie nothing’s unnecessary. However uneven, each album has always been a new facet of a restless artist. He’s left us a body of work that will take a lifetime to explore, and for that I will always be grateful.


Much has been made recently about the “Lazarus” music video, which takes as its subject a bedridden David Bowie and includes the lyrics, “Look up here, I’m in Heaven / I’ve got scars that can’t be seen.” Death is present throughout Blackstar, but like an idiot I mostly ignored these obvious hints. A world without David Bowie seemed inconceivable, especially since he was still making vital and important music. There was more work to be done. It’s amazing to me that even as he passed away, Bowie had the utmost control over his image. It’s equally amazing that he had such generosity to give us one final parting gift. Few other than Bowie could transform their death into a work of art. 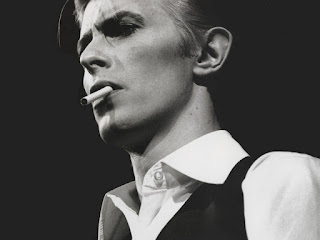 I’m sure the death and resurrection story of Lazarus appealed to Bowie’s playful instincts. And he’s not wrong. He will rise again, if not in flesh, then in culture. Like Wintermute in Neuromancer, Bowie has achieved something like non-corporeal sentience. His iconography will live on, and other artists will take Bowie the saint and remake him for their own purposes. Artists have been creating their own David Bowies for some time now, from Hedwig and the Angry Inch to Todd Haynes’s Velvet Goldmine to The Venture Brothers to a Neil Gaiman short story. Bowie is an artist, a revolutionary, and an idea unbound by time, space, life, and death.

Despite (or because) of this, it still seems unthinkable that David Bowie has died. Even as he aged, he seemed ethereal as if he had already slipped this plane of existence long ago. Rest in peace, David Bowie, and thank you.