Mogwai's new video for the song "Batcat," from their forthcoming album The Hawk is Howling, is some sort of strange amalgam of a better version of The Village, a little bit of Eyes Wide Shut and a batcat thrown in for good measure. What's a batcat you say? Well there's only one way to find out: click below! Warning: there's some freaky shit to be had.


The song itself sounds like the band is expanding on their last album, Mr. Beast without retracing their steps. "Batcat" and their earlier release, "The Sun Smells Too Loud," have already sold me on the new album. Of course, I would be hard pressed not to be exited about a new Mogwai album.

A Buffy Who Can Give You Paper Cuts?

The internets, that wonderful dumping ground for all things obscure or obscene. Well, thrash around in that unseemly dumping grounds long enough and you just might find a hidden gem. That's what happened recently when the supposedly long rumored four minute pilot for Buffy: The Animated Series surfaced on the web. View below for the same witty banter of the regular TV show but with a much brighter color scheme:

The most surprising thing about this little snippet is not only that it's pretty damn good, but that no station wanted to pick it up. I'm a big fan of animation but I just don't find myself watching anything animated these days. In the States animation is geared towards the younger crowd with only a few companies like Pixar managing to appeal to both kids and adults, and ever since the Dini/Timm DC Universe - beginning with Batman: The Animated Series and ending with Justice League Unlimited - went off the air, television has been a wasteland for cartoons that are capable of appealing across generations. If this pilot is any indication, a Buffy cartoon might have been capable of bridging the gap between both older and younger fans of violence against the undead.

There are several problems the animated series might have run into. The television show had some pretty heavy themes, and I would imagine a certain population might be upset if their kids became interested in the live action TV show where Willow's crush on Xander transforms into girl on girl kissing. And then there's the violence. Sure, they're undead vampires but you're still sticking a steak into their hearts and watching them explode.

Of course there are also plenty of missed opportunities. In one of the myriad pop culture references the show shot at its audience, the central characters often referred to themselves as the "Scooby gang." Well, what if, like The New Scooby Doo Movies, Buffy: The Animated Series had weekly guest voices who would stumble into Sunnydale and become embroiled in the latest mystery. The "Scooby gang" could wind up meeting the actual Scooby gang. I for one would be excited for the inevitable Don Knotts cameo. Sure, he may have died recently, but wouldn't that make it perfect to bring him onto the show as a zombie? So many missed opportunities. Oh well, you know what they say: "The best laid plans of mice and men / are often fucked over by incompetent studio executives who wouldn't know a great show if it slapped their momma."
Posted by Tom Birkenstock at 8/03/2008 09:48:00 AM No comments:

Email ThisBlogThis!Share to TwitterShare to FacebookShare to Pinterest
Labels: Television

The X-Files: I Want to Believe 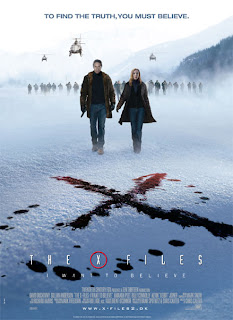 The X-Files: I Want to Believe (4/5)
Six years after the series finale of the cult hit comes the second theatrical X-Files film. The show may have ended six years ago but for those who kept with the series through the exhausted ninth season know full well that the TV show died long before the finale episode. In one of the biggest television mistakes since the introduction of cousin Oliver, the producers decided that The X-Files was really about the monsters and not really about the relationship between Mulder and Scully and decided to introduce two new agents: Doggett and Reyes. Perhaps the biggest insult to fans was how the writers tried to slip these new characters into the show like they were dealing cards from the bottom of the deck, assuming the audience would be none the wiser. Mulder went on the lam, making guest appearances every now and then, and Scully became pregnant which regulated her to the role of consultant for Doggett and Reyes. The X-Files: I Want to Believe comes off as an apology of sorts for trying to move the spotlight away from the two agents we actually cared about. Interesting enough, the film is less concerned with the supernatural mystery that it is with the relationship between the two leads.

As the film opens we discover Scully once again practicing medicine like she had contemplated several times during her F.B.I. career. She now works at the Catholic hospital Our Lady of Sorrows where she is treating a young boy with an incurable brain disease. Since the series ended Scully and Mulder have moved in together and when Scully is at work Mulder remains at home still obsessing over the death of his sister, even though he knows full well she died decades ago. In the first ten minutes X-Files creator and co-scribe, Chris Carter, proves how well he knows these characters. Scully was never comfortable at the F.B.I. and always had doubts that she was doing more good working for the federal government than working in medicine. The X-Files was never her obsession, a conflict that remains central in I Want to Believe. Mulder now sports a Ted Kacsinski like beard which hints at the anti-government paranoiac that has he has always been in danger of becoming. Scully still serves as Mulders anchor and without her one could imagine Mulder mailing letter bombs from his homemade shack in the woods. Despite the new setting one can immediately tell these are the same two characters we watched hunt monsters every week, but at the same time it’s apparent that the past six years have weighed heavily on them.

Since the trial of the series finale, Mulder has become a forced recluse wanted by the F.B.I. When a self-professed psychic and ex-priest, Father Joe, turns up claiming to have visions about a recently missing F.B.I. agent one of the lead investigators decides to offer Mulder immunity in exchange for his help in either confirming or debunking Father Joe’s abilities. There are many reasons to doubt Father Joe’s story, the least of which is that before he was excommunicated from the church he molested over thirty boys. Of course, once on the case Mulder can’t stop at just giving his professional opinion on the paranormal and begins settling into his role as an F.B.I. profiler. Scully is naturally afraid that Mulder is being pulled back into a life they both gave up long ago.

The movie takes plenty of risks, the first of which is that from the beginning Mulder and Scully are in a conjugal relationship. The obvious choice for a film like this is to fall back on the “will they or won’t they” tension that was one of the hallmarks of the television show. Instead the movie deals with all too obvious questions about how two workaholics can live together and whether Mulder should be putting himself in danger with someone waiting for him at home. The second major risk is Scully’s subplot concerning her young patient whose only chance for a cure winds up being an experimental stem-cell treatment. Naturally, this doesn’t sit well with priests at the hospital. 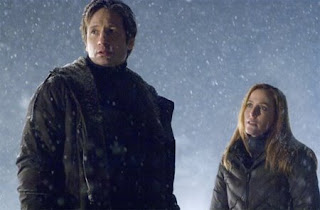 In a film that ponders such timely subjects like God, stem-cell research, and gay marriage, perhaps the biggest taboo the film broaches is the portrayal of a sustained relationship in a Hollywood film. When an audience has become accustomed to an unrequited love between two characters it can be difficult to imagine the same two characters living with one another every day, but thanks to great performances by Gillian Anderson and David Duchovny the transition seems completely natural. The intervening years are scrawled on Duchovny’s and Anderson’s face, the former appears more world wearied and the latter strikes a more regal profile. As a couple they are reminiscent of that pair of slightly eccentric liberals who have strange stories about backpacking through the Ural Mountains and every time you come over offer up a different vintage wine that’s just right for the occasion.

Special mention must be made of Billy Connolly’s role as Father Joe. Because of his work as a comedian it’s easy to underestimate Connolly’s acting ability but here he perfectly nails the ambiguity of someone who may be either faking visions from God in order to weasel his way back into the church or he actually believes he is receiving these visions as a means of redemption. The presence of Father Joe carries some heavy implications. Are the visions actually from God and if they are then are they meant for redemption or punishment? What about Father Joe’s pedophile urges, did they originate from the almighty?

Much like The Dark Knight, I Want to Believe uses a thriller format to delve into deeper questions. That’s not to say that the film doesn’t stumble in parts. It is difficult to believe that Scully is capable of organizing experimental surgery within the course of an evening’s work and a quick search of the internet. In a film dealing with psychic visions you don’t want the science to be the least believable part of the story. Of course, this is a small price to pay for a thriller with something to say.

Judging by the box office numbers there appears to be little chance for a third film. In a way that’s all right since I Want to Believe manages to finish the story the TV show started. Not about the alien conspiracy, there are plenty of unanswered questions left over from the show, but rather about the real story: the relationship between Mulder and Scully. Now that fans of the series know the two remain together whether there’s an alien invasion or not doesn’t really matter, and even if this is the last X-Files story told it works perfectly as a tidy epilogue to a very, very long story.
Posted by Tom Birkenstock at 8/02/2008 10:25:00 AM No comments: