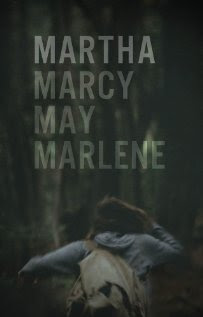 Martha Marcy May Marlene marks the debut of two talents, the director, Sean Durkin, and the actress, Elizabeth Olsen. Both actor and director show a kind of assured performance that seems relegated to those who are either new to a scene, when talent has been building up for some time and only now has had a chance to unveil itself, or to older creative types, who have enough success behind them that they no longer fear failure (the in-between is usually the tricky part). Elizabeth Olsen (and here I’m required to tell you that she is the younger sister to the famed Full House Olsen twins) plays Martha, a girl who has spent an indeterminate amount of time in a cult hidden away in upstate New York. She eventually flees the confines of the commune and is taken in by her sister and brother-in-law who own a spacious lake house in Connecticut.

From here the film is divided into two narratives, one chronicling Martha’s ordeal in the Manson-like collective and the other detailing her return to polite society at her sister’s place. We learn from the former narrative that the cult takes in runaways and is overseen by a charismatic leader, Patrick, played by John Hawkes. While the cult members bandy about pseudo-New Wave jargon, we hear talk of energies, the specific philosophy of the cult remains vague. As one might expect, Patrick has intimate access to most of the women, as do the other men on the compound, to varying degrees. The cult members share duties taking care of children and tending to a garden, and they hope one day to go fully off the grid.

The second narrative follows Martha as she attempts to reconnect with her sister Lucy and return to normalcy. For Martha, the lake house is an even more foreign world than the cult. She still plays by the rules set up for her by Patrick. She goes skinny dipping in the middle of the day. And when she feels lonely in her bedroom, she has no qualms about lying down on the foot of Lucy’s bed, even if her sister is in mid-coitus. As Martha’s actions become increasingly bizarre, her brother-in-law puts more pressure on Lucy to hand her sister over to an institution. As we learn what Martha has gone through, it becomes more and more difficult to sympathize with Lucy and her husband’s frustrations. But while Lucy’s husband, Ted, often comes off as a prick (tellingly, he has a well enunciated British accent), it is hard to blame Lucy’s reticence to take on the responsibility of handling Martha on her own.

Even though the two narratives are chronologically back to back—the story of Martha’s time in the cult followed by her time with her sister—neither is prized over the other. In fact, it is difficult for me to describe events that occur at the compound as flashbacks because for Martha these events do not exist in the past. She carries the trauma with her. Durkin, the director, excises most establishing shots from the movie, making it difficult to tell whether the next scene begins at the lake house or the compound. The title of the film is a series of names the main character goes by. Her birth name is obviously Martha. She is given the name Marcy May by Patrick when she joins the cult. And Marlene is a communal name used by all the women in the cult to answer the phone. Martha is a woman who has been stripped of her ego and exists in the liminal space between “is” and “was.”

Elizabeth Olsen does a fantastic job of portraying a woman who has undergone immense pain. While this trauma does not always manifest itself, it always lingers underneath the surface of her performance. Likewise, Durkin imbues even the most mundane scenes with a sense of tension. It is far, far too early to tell where either Olsen or Durkin’s career will go at this point, but I would be interested in seeing the two work together again. Regardless, I have a feeling plenty more will come from both of these talents.