For most of the world, Iron Man 3 is the first Marvel film following the massively successful Avengers film.  People the world over have waited to see how Marvel will go back to focusing on a single superhero and whether it would satisfy after last summer’s superhero binge.  But for some of us Iron Man 3 is important for a very different reason.  For a few movie fans, Iron Man 3 signifies not necessarily the glorious return of a franchise superhero, but rather the reunion between star Robert Downey Jr. and director Shane Black.  You might be unfamiliar with the name Shane Black (and honestly who could forget a name like that), but you almost certainly are familiar with the movies he has scripted.  In the late eighties/early nineties Black became the highest paid screenwriter of all time.  He’s most famous for his work on Lethal Weapon and its first sequel and less famous for films like The Last Boy Scout and The Long Kiss Goodnight (although, for my money, The Last Boy Scout is entirely underrated).  His movies combined action elements popular in the eighties with a decidedly film noirish cynicism.  It was no surprise, then, when, after nearly a decade missing in action, Shane Black’s first directorial effort was a post-modern noir, Kiss Kiss Bang Bang.

It was overshadowed by the first Iron Man, but Kiss Kiss Bang Bang was without a doubt Robert Downey Jr.’s comeback vehicle.  It may not have reached the kind of audience that a superhero film can, but it once again proved that Robert Downey Jr. possessed impeccable comedic timing and charisma to spare.  And there’s a shared comedic sensibility between Downey and Black.  Both seem to revel in freewheeling and unexpected turns, quick wits and big egos.  And while Iron Man 3 is first and foremost a big budget summer blockbuster, both Black and Downey find enough space to fit their own oversized personalities.

There’s plenty of back story in Iron Man 3, so much in fact that a lot of information is delivered by Downey in the form of a voiceover.  The film begins at the turn of the new millennium when people were still worried about the Y2K virus and Eiffel 65’s little ditty, “Blue,” was worming its way into our hearts.  One of the central themes of the film is how decisions have long term consequences that we aren’t initially aware of, and so early on we are introduced to Maya Hansen, a genius botanist who is developing a procedure that could eventually help re-grow limbs.  We are also introduced to Aldrich Killian, played, at least in this part of the film, as socially awkward computer nerd who walks with a cane and has yet to master basic grooming techniques.  Killian makes his way onto the same elevator as Tony Stark, and he proceeds to pitch his idea for a venture capitalist start up.  In order to get rid of him, Stark promises to meet him up on the roof in a few minutes and then deliberately forgets about it. 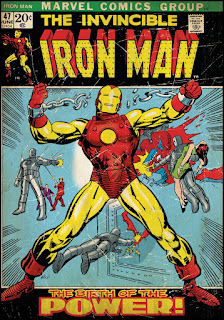 It should come as little surprise that thirteen years later Killian the socially clumsy computer nerd has become Killian the suave industrialist.  Killian has somehow cured his limp and is macking on Tony Stark’s main squeeze, Pepper Potts.  Meanwhile there’s a terrorist on the loose by the name of The Mandarin who has been releasing mysterious footage of himself decrying Western decadence while detonating bombs across the country with impunity.  It doesn’t take much to figure out that there’s a connection between The Mandarin and Killian (but things are either more or less than they seem at first).  While following one of Killian’s henchmen, Stark’s former body guard and friend, Happy Hogan, gets himself blowed up real good, and in a fit of rage Stark calls out The Mandarin on television, even providing his home address as a challenge.

Stark’s challenge is accepted, and three heavily armed helicopters show up at Stark’s Frank Lloyd Wright inspired mansion and proceed to blow it up.  Stark narrowly escapes, and decides to play dead in rural Tennessee.  While convalescing in a barn, Stark strikes up a friendship with a precocious ten year old named Harvey.  Stark spends most of the film outside of the Iron Man suit, a smart move on the part of the filmmakers.  One of the chief problems with superhero films is that the superpowers can get in the way of the action.  We’re never quite certain how much punishment the protagonist can take and after a while watching two nearly invulnerable people pound on each other starts to lose its appeal.  This is why it’s much easier to build a movie around Batman than Superman.

There are a number of twists and turns throughout the film, and I don’t really want to give them away.  Shane Black is a master at setting up expectations just so he can undermine them.  (Watching Iron Man 3 a year after the Avengers got me thinking that maybe Black is the progenitor of Joss Whedon.  Both really want to pull the rug out from under the audience).  A lot of Black’s personality really shines through in the film.  Like Lethal Weapon, Kiss Kiss Bang Bang and A Long Kiss Goodnight, the movie takes place at Christmas (this guy loves Christmas).   Much of the dialogue consists of men exchanging quippy exchanges with one another while under nearly fatal doses of testosterone.  And Tony Stark, like Martin Riggs before him, is suffering from mental problems, a case of PTSD following the events of The Avengers.  Hell, the climax of the film even takes place at the docks.  Of course, all of Black’s personality is shrouded in the wares of the Marvel Universe, but it’s a good fit nonetheless.

The film itself isn’t perfect, exactly.  The villain’s plan is ridiculously convoluted.  There are also a number of moments where the movie attempts to sublimate our collective trauma surrounding 9/11.  Terrorism is used as a plot point, but it’s a mostly bloodless kind of terrorism that’s meant to be exciting rather than horrific.  Perhaps the most troubling moment in the film happens when Tony Stark calls out The Mandarin, claiming that he’s out for pure revenge and not politics, as if the two are mutually exclusive.  If we’ve learned anything after 9/11, we should have learned that vengeance is an extension of the political.  So the film might read as a piece of propaganda to some (which is true of most of the Iron Man movies) but to others it might be a fascinating depiction of America’s failure to fully come to grips with 9/11 even a decade out.  But purely as a work of entertainment, Iron Man 3 is the most accomplished of the series.  Where Iron Man 1 and 2 worked best during moments of comedy and only started flailing during the action sequences, Iron Man 3 balances these two modes perfectly.  It got me thinking that this whole superhero thing might have legs after all.
Posted by Tom Birkenstock at 5/12/2013 05:10:00 PM No comments: