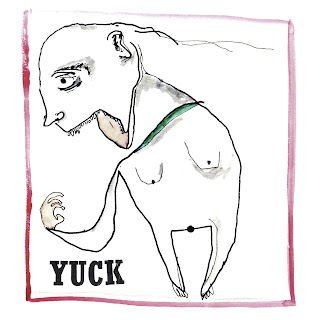 Take a look at that cover art. I mean, look at it. They say you shouldn’t judge a book by its cover, but sometimes it’s just so damn easy. After glancing at the cover art of Yuck’s eponymous debut, you immediately know that this group worships at the altar of J. Mascis and other 80s and 90s indie rock guitar gods. You probably already have a good idea of what this album sounds like, but I’ll risk redundancy by dropping a handful of words on a review.

In a long tradition of English musicians, stretching back at least as far as the Beatles and the Stones, the London, England based Yuck seem far more interested in what’s going on across the pond than in their own back yard. And I can’t blame them. We make some fine music in the States. But sometimes it takes a foreign ear to be able to locate the very essence of great American music and then to play it back to us. I know artsy Americans like to prove the superiority of their own taste by claiming artist X from Europe is so much better than artist Y from the U.S., but when a European band loves American music this much (and vice versa), I can’t help but feel like national borders are, at times, outdated.

Above I alluded to Yuck’s love for Dinosaur Jr., and while this might be the case, I wouldn’t limit their influences to any single band. Songs like “The Wall” and “Operation” have a beaten, gravel encrusted wall of guitar that certainly pay tribute to J Mascis’s wailing guitar, but you will find that much of the album leans heavily on lighter ballads. “Suicide Policeman,” for example, follows the lead of Yo La Tengo by incorporating horns and backing vocals that sound like they were rescued from a 70s AM radio rock ballad and housed in a much better song. The fact that Yuck are just as comfortable turning down the lights and plucking as few strings as much as they are setting their songs to full rock demonstrates how dynamic their music can be. To further prove this point, Yuck ends the album on “Rubber,” a chugging, Sonic Youth inspired epic that trades in hooks for texture.

Some might accuse Yuck of being two steps away from cover band territory, and, to be sure, certain songs wear their influences on their sleeves. But I think any charges of unoriginality are largely without merit. After all, the indie rock bands Yuck is clearly influenced by were a diverse bunch of musicians connected only by time and a shared love of the guitar. Yuck doesn’t so much echo these influences as they have internalized and recombined them. I must back track somewhat from my introduction. Despite the obvious similarities between Yuck’s cover art and some Dinosaur Jr.’s albums, the band easily transcends my lazy comparison. Yuck has produced an impressive debut that gives me faith that, like many of the bands they are influenced by, they will be putting out worthwhile music twenty years down the road.