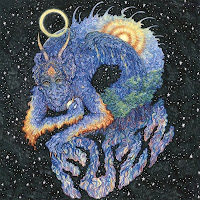 When was the last time you heard a drum solo on a new album?  Think about it.  Drum solos have long been relegated to the realm of live albums from 70s rock gods like Led Zeppelin or of overreaching prog bombast from the likes of Rush.  Well, on Fuzz’s debut self-titled album a drum solo appears a little over three minutes into their song “Loose Sutures.”  But more surprising than the inclusion of a drum solo in an album released in 2013 is the fact that I didn’t immediately recoil.  Like many, I’ve long accepted notions of musical aesthetics that decried bombast for its own sake.  If anything, Fuzz’s debut could convince a new generation of musicians and listeners that it’s time to reassess what we value in modern rock and roll.

While I may be overstating my case somewhat—after all, bands like Queens of the Stone Age, Comets on Fire, Woods, and The Black Angels all borrow from classic rock radio—there’s still something invigorating about hearing Fuzz’s unabashed instrumental noodling.  And if anyone can make us rethink what’s currently fashionable in rock music, it’s probably Ty Segall, the incredibly prolific artist who not only produces his own albums at breakneck speeds, but also seems content to collaborate with whoever is willing to pick up an instrument and play.  The songs on Fuzz give you the sense that they morphed out of epic basement jam sessions.  But what saves these songs from accusations of excess is the fact that musicianship always serves the songs.  “Sleigh Ride” contains a hook that continually whips the song forward to its conclusion, and album opener “Earthen Gate” evolves from the primordial goo of its opening into a fully formed rock riff.

Perhaps the key to Fuzz’s success is that, despite the call backs to early 70s proto-metal, it also doesn’t pretend that the last forty years of music hasn’t happened.  With a little tweaking the shortest song on the album, “Preacher,” could be transformed into a bona fide punk shredder.  And unlike most rock music from the 70s that were looking for bigger and better studio sounds, Fuzz has a distinct lo-fi element.  In a sense, Fuzz might best be viewed as another variation on the sound of Seattle grunge whose members like Mudhoney and Soundgarden seemed perfectly happy to break down barriers between classic rock and punk.  Whatever ingredients were used to concoct Fuzz’s curious brew, the results are undeniably engaging.