Best Coast - Crazy for You 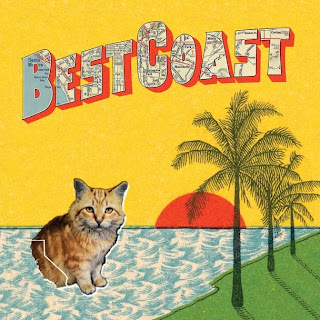 Rock music has always been dominated by men. From Buddy Holly’s pining for Peggy Sue to the libidinal poses of Jim Morrison, most rock and roll songs have been told from the perspective of those with a Y chromosome. In fact, the masculine point of view has been so ingrained in rock and roll that when a woman wants into the tree house she has to prove that, like the rest of the guys, she can take just as many drugs and partake in just as much indiscriminant sex. Janis Joplin, Grace Slick, and Joan Jett, to name a few, became rock and roll icons by asserting that whatever guys could do, they could do better. The approach of what’s-good-for-the-goose-is-even-better-for-the-gander has had its benefits, allowing women to break from roles traditionally created for them, but just as often it can serve to reinforce the whore/Madonna dichotomy that stretches back to long before Chuck Berry fashioned the first rock and roll song.

With this, incomplete, history of women in rock music I’ve come to Best Coast’s debut album, Crazy for You, with some trepidation. Lead singer Bethany Cosentino has a penchant for writing songs about lounging and longing that stand in stark contrast to the pioneers of women in rock. Instead of making lyrics like “Take another little piece of my heart” sound like a challenge, Cosentino sings as if she spent the entire album holding onto her paramour’s pants legs as he strolled out the door. On the opener, “Boyfriend,” she sings, “I hope that he’s at home / Waiting by his phone”; later, on “Goodbye,” she croons “Every time you leave this house / Everything falls apart”; and, finally, on “Bratty B,” she pleads “Pick up the phone / I wanna talk about how / I miss you so much.” It’s not that there aren’t plenty of examples of guys pining over girls in songs, but has there ever been an album with this much self-destructive longing? Cosentino has avoided the whore and Madonna stereotypes only to fall firmly into the just as damaging archetype of the crazy girlfriend.

The songs themselves are reasonably catchy throwbacks to early rock and 60s girl groups. Like most musicians who trade in retro styles, Best Coast play up the difference between the pristine Leave it to Beaver image of the past the internet ravaged present. For her part, Cosentino presents herself as stewing in a cloud of marijuana and codependence. Likewise, much like some of those early pop songs, here the sentiments are as simple as the rhymes. It would be tempting, then, to read Best Coast’s mix of longing and dependence as a critique of those classic songs, revealing to the reader the kind of damage that music inflicted on the image of women. The only problem with this take on Best Coast is that it’s a complete misreading of some of the best girl group songs. When Dionne Warwick sings “Walk on by” to her ex, she’s asserting the fact that pain is temporary just as much as she concedes that she has spilled more than a few tears since he has left. Cosentino concedes much more than she asserts, and I suppose your enjoyment of Crazy for You depends on how much time you’ve spent sitting by the phone waiting for the girl in Biology class to ring you up.

Exit Through the Gift Shop 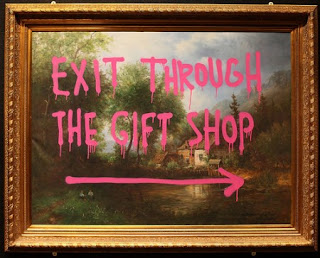 Exit Through the Gift Shop opens with a montage of street artists putting their work on display in a number of precarious locations—along the sides of skyscrapers, across street signs, and over ads for beauty products. Where the artwork is located, whether elevated to improbable heights or splayed across feckless city ads, becomes just as integral to the overall effect of the art as what is pasted or spraypainted by the artists themselves. In other words, street art might be the first time in the visual art world where the canvass is just as important as what is displayed on it. It’s a suitable beginning to a film that asks us to question what we see in art and in what ways our reactions to artwork are bound up in how it is presented to us.

Exit Through the Gift Shop centers on Thierry Guetta, a French ex-pat living in Los Angeles, and how he descends into the shadowy world of street artists. Ever since Thierry had received his first camcorder he found himself self-documenting all aspects of his life. We learn that most of Thierry’s early documenting efforts were mostly of the mundane moments of everyday life, and it wasn’t until he made a trip back home to France where he encountered his street artist cousin, Invader, that his videolog started to shape itself into some sort of purpose. After watching his cousin work, Thierry becomes intrigued by the underground art movement that seems to be hiding in plain site on city signs and skyscrapers. He begins documenting and obsessively following any and all street and graffiti artists he can find, collecting them like baseball cards (or, Pokemon cards for the kids out there). He even manages to strike up a friendship with America’s most ubiquitous street artist, Shepard Fairey, who is mostly famous for his Andre the Giant and They Live mash up, “Obey,” as well as his inescapable red and blue Obama profile.

In order to find acceptance among the usually reticent group of underground artists, T 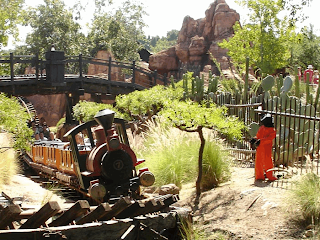 hierry claims that he is making a documentary. This sets up a symbiotic relationship between Thierry and the artists he shadows: he needs a subject for his camera and, because of the short lifespan of their artwork, they need documentation. This leads Thierry to eventually meet the most elusive street artist, Britain’s Banksy. Like most of the street artists featured in the film, Banksy’s work is of a distinctly political bent, and perhaps the most memorable moment of the film occurs when Banksy brings an inflatable simulacrum of a Guantanamo prisoner to Disney World. The presence of a chained and hooded American prisoner in the midst of the most meticulously controlled place on earth naturally erupts into chaos.

Eventually Banksy encourages Thierry to start making his own artwork, perhaps merely as a means to get rid of him and his pesky camera. Convinced that art is nothing more than a form of brainwashing, Thierry dubs himself Mr. Brainwash. After briefly trying his hand at pasting a signature icon around L.A., Mr. Brainwash quickly decides that what he really needs is a gala exhibition. After recruiting an army of starving artists, Thierry refits an abandoned office building into his own personal art gallery and through the magic of delegation constructs a surprising number of exhibits in a matter of weeks. And yet despite his relative lack of experience in the art world and his dubious artistic achievements, Mr. Brainwash’s show becomes a massive success. Lines for his show wrap around the block, and his artwork sells for thousands of dollars each. All of this and no one at the exhibit is quite capable or articulating why Mr. Brainwash is the genius they seem to think he is.

The central question of the Gift Shop is, how do we value art? For much of the film this question is on the level of expression. What does it mean for Banksy to place an image of human depravity, a Guantanamo inmate, in the middle of a make believe world tailor made to help its guests forget about the troubles of the outside? But by the end of the film that question of value becomes monetary. We see Thierry walking through his gallery naming a price for his artwork almost at random. The value of art shifts from a question of interpretation to a question of monetary worth.

It’s this shift in how art is valued 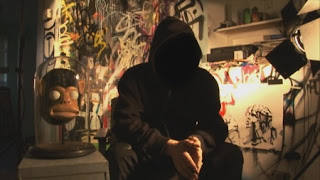 that has some people claiming that the film illustrates why artistic value is meaningless. I disagree with this supposed message of the film. Clearly from the reactions to Thierry’s work by Banksy and Fairey, we are not supposed to take his artistic merit seriously. In fact, most of Thierry’s work looks like bargain bin Andy Warhol. However, Thierry vaults over his lack of talent by bolstering his project with copious amounts of hype. Those who visit his gallery are not questioning the artwork itself, but rather its potential cultural and monetary capital. Exit Through the Gift Shop wants us to ignore the way that celebrity buyers and art investors have obscured our view of art, and instead asks us to view, intently, what is right in front of our eyes.