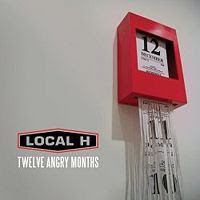 Both gained the public spotlight during the aftershocks of the nineties grunge earthquake. Both earned their success through unbearably catchy singles. Both bands appeared dead after their major label sequels failed to meet expectations. Both resurrected themselves in the new millennium after a lengthy hiatus where they lost and replaced a band mate.

That’s where the similarities end. One of these bands went on to recapture their mid-nineties songwriting skills and added a few new tricks while they survived playing small clubs and searching out independent labels for their newer albums. The other band sounded like a cheap knockoff but still managed to sell out stadiums and eat up internet chatter about their latest new release.

I’m talking about Local H and Weezer here. In my mind it is one of the great tragedies of our time that Weezer, a band who hasn’t been able to write a truly great song for well over a decade, has managed to coast on nostalgia selling millions of records while Local H, a band that is as strong, if not stronger, than they were in the alternative rock heyday, is remembered as a one hit wonder. Now that both acts are putting out new albums in the same year I wish I could claim that things are about to change and that a chiasmus shift will occur finding Local H on top and Weezer looking for a record deal. Instead, expect Weezer to put out a series of albums that sound as if they were recorded during a coke fueled all-nighter right before deadline (“Hey, remember that old Shaker song, we’ll just use that and people will think we’re being clever”), and Local H will continue to put out consistently good to great albums so long as they find a label willing to distribute them.

It’s a real shame too, because 12 Angry Months is the best Local H album since Pack Up the Cats. Not coincidently both albums emerge from the concept records of the 1970’s, but instead of the mystifying and campy sci-fi rock of Electric Light Orchestra or Styxx, Local H’s album long tales are of a more personal nature. Pack Up the Cats chronicled a band moving from the countryside to the big city and realizing that many of the same tribulations exist in both places. 12 Angry Months is a break up album that follows the despondent over a single post-break up year. As you might guess each song corresponds to a month.

What’s particularly powerful about Local H’s latest is the sheer honesty. This isn’t a collection of wistful songs about a lost love engineered to be perfect background music to sip one’s morning cup of joe. Instead, Scott Lucas realizes that most relationships end in an immolation that engulfs both participants. On “White Belt Boys” Lucas repeats “I hope you have a lonely life” and Lucas is his least sympathetic on “Jesus Christ! Did You See…” where he bluntly states, “to think I used to fuck you.” Sentiments like these are effective because of their honesty, and because Lucas realizes they emerge as much out of his hatred of another as they do out of self-loathing, as evinced by the mantra “only a groupie would ever want to love me.”

The transition from love burned to denouement backtracks from introspection to anger. Songs that hint at some sort of reconciliation, like “Simple Pleas’” acoustic guitar, are tempered by the anger evident in the industrial sounding percussion on “Machine Shed Wrestling.” The album accurately chronicles how hatred lies underneath the most sophisticated of sentiments. Lucas’s wit is underrated, and it is his sense of humor that also helps him recognize what the hell happened. On “The One With ‘Kid’” he describes the process of disentangling the couple’s integrated record collection, a task that leads him to accusatorily ask where his Kyuss records are, and to claim “you never liked them until you met me.” Later, in “Machine Shed Wrestling,” Lucas sings “As a product you would be great, and all the income you generate, but as a lover you’re just a bust, you’re not a service I can trust,” suggesting that the two first met comparing notes about their recently divorced record collection.

A rock band like Local H who openly confesses their love of Daft Punk is the kind of rock band who can write some great pop songs. This is perhaps the most disappointing aspect of the Weezer/Local H comparisons. Despite being known as a power pop band, Weezer hasn’t written a truly memorable pop song since their second album. Skim the top four songs off of just this one Local H album and compare it to the top four songs from Weezer’s last four records and I guarantee you every Local H song will win the pop category.

But Local H doesn’t just stop at writing catchy songs, they also have a knack at writing final songs that sums up everything that came before. On “Hand to Mouth” Lucas repeats the lines “You’ll learn what really matters, you’ll know what really counts, you’ll hear the chitter-chatter, they say when you’re living hand to mouth,” with variation, on into infinity. Each intonation suggests a new and slightly different understanding of the phrase. Built upon tricks old and new, “Hand to Mouth” is possibly the best song in Local H has written to date, and possibly my favorite song so far this year.

The music industry has undergone some mighty peculiar changes since the 1990’s. I wish all of it was for the better. Despite the injustices that still exist in the marketplace, I’ll be happy if the long-tail provides enough room for a band like Local H to continue to write great albums without being forced to ride the wave of the inevitable 90’s nostalgia trend. I’ll end before you get me started on the Stone Temple Pilots’ reunion. That’s a whole other review.