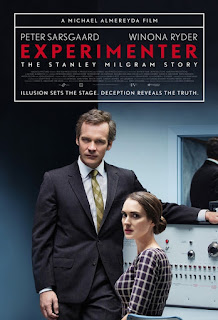 As Experimenter reminds us, the Stanley Milgram’s experiment on obedience and authority is found in nearly every first year psychology textbook, but the influence of Milgram’s work has spread much further than just the freshman college course. It’s the kind of experiment that has taken hold of popular imagination in such a way that high school teachers across discipline drop it as a little bit of knowledge. There’s something about Milgram’s experiment that makes for a great story. It’s a narrative all its own that confirms our worst fears. It also happens to be the focus of Michael Almereyda’s biopic, Experimenter.


Just a refresher: in Milgram’s obedience experiment, an unsuspecting subject is asked to play the role of a teacher while a second individual, who is an actor aware of the ruse, plays the student. A man pretending to be a doctor, garbed in a lab coat, explains the rules of the experiment to the subject, and during the experiment, the “doctor” sits behind the subject and directs his or her actions. The subject/teacher is instructed to ask the student a series of questions--the student would essentially have to memorize and repeat the second word in a series of word pairs--and when the student chooses incorrectly, the subject must shock him with an increasing amount of voltage. Throughout the experiment, the student/actor feigns pain from his place in a separate room. Despite reservations, the vast majority of subjects administered the highest voltage.


Experimenter is a surprisingly strong entry into that most maligned of genres: the biopic. The biopic has a reputation for being weepy Oscar bait at its absolute worst (see: the perfectly mediocre The Theory of Everything and the truly egregious The Imitation Game, exemplar of everything wrong with the genre). Biopics shouldn’t be this awful. There are some fascinating people who have interesting lives and exist in interesting times. If I were to diagnose the problem with the biopic, it is that they skew too heavily towards telling us one man or woman’s story without regard to the larger context. Why do these people matter? What do they say about the times in which they lived? Not only do most biopics take these questions for granted, they also try to stuff a person’s entire life into two hours, which is usually a fool’s errand.


Along with End of the Tour and Love & Mercy, Experimenter slips the curse of the biopic by paying attention to questions that extend far beyond the life of a single man. Almereyda uses Milgram’s life as a jumping off point to explore questions of power, authority, human plasticity, and authenticity. At times, the film feels more like a visual essay than a traditional film. Although screenwriting rules usually forbid voice-over and breaking the fourth wall may seem garish, Almereyda stuffs his film with both. Milgram himself becomes our Greek chorus, explaining his experiments, which are not limited to the one that made him famous, and leading us through his life.


Because his voice accompanies us throughout the film, Peter Sarsgaard must do plenty of heavy lifting as Milgram. The role of Stanely Milgram provides a wonderful opportunity for an actor, and Sarsgaard takes full advantage of being front and center, addressing the audience for much of the film’s running time. Sarsgaard plays Milgram as hunched and observational. He rarely interacts with any of the subjects of his experiment, and his ability to speak to the camera gives him a sort of God-like authority. And yet, he’s also unassuming. He may have a massive ego, but it has been honed by the rigors of scientific discourse.


Sarsgaard also subtly plays Milgram’s identity by ever so slightly incorporating a Jewish-American accent when he’s alone with family and friends but hiding it when he’s in a professional setting. As he mentions throughout the film, Milgram is the Yiddish word for pomegranate, one of the six fruits of the Hebrew Bible. Milgram’s work was influenced the events of the Holocaust and Adolf Eichmann’s trial in Jerusalem, an event that would lead the philosophy Hannah Arendt to coin the term, “the banality of evil.” From Eichmann’s point of view, he wasn’t a mastermind behind one of humanity’s greatest sins; he was merely doing his job as a small time member of a much larger machine. Evil, then, doesn’t come in the form of Satan; it comes in the form of a bureaucrat doing what he has been told and not taking responsibility. It’s just doing what the nice guy in the lab coat tells me to.


Milgram’s obedience experiment has imbedded itself into the popular consciousness because it purports to say something about human nature, and this is certainly true. But it also says something about how our environment molds our behavior and sense of ethics. The film emphasizes the importance of environmental factors by employing obviously projected backgrounds. Although the sciences purport to harden the world around us--to discover facts--the film’s playful form suggest that Milgram’s work does the opposite. He becomes a postmodern scientist, suggesting with his work that we do not exist except as constructs of the world that shapes us. There’s no I there.


Eventually, the film makes its way down the rabbit hole of inauthenticity. In 1976, CBS produced a fictionalized account of Milgram’s obedience experiment, starring none other than William Shatner (Kellen Lutz) as a fictionalized version of Milgram. This leads to scene in which Milgram as played by Sarsgaard converses with Shatner as played by Kellen Lutz dressed as Milgram on the set of a cheesy 70s film.

The film even questions Milgram’s ability to navigate ethical concerns in science. There is no way that the obedience experiment would make its way past an institutional review board today (“informed consent” is a hell of a thing), but Milgram seems disconcertedly dismissive of the kind of emotional harm he may have caused others. Tellingly, it’s the women in the film who mostly call him out on his lack of concern, which suggests that Milgram may have had a gendered ethical blind spot. In the end, the film asks us to think about ethics in a postmodern world. It reminds me of one of my favorite quotes by Vonnegut, which I’ll leave you with: “We are what we pretend to be, so we must be careful about what we pretend to be.”
Posted by Tom Birkenstock at 2/14/2016 05:04:00 PM No comments: