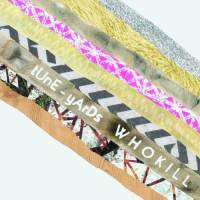 Despite his archetypal place as a hero, no one wants to be the boy who obnoxiously points out that the emperor has no clothes. Maybe the town folks were deluding themselves by celebrating the non-existent attire, but they were also taking a little time out of their day with their family to enjoy a royal procession. And that little brat had to ruin it for everyone. So, it is with little pleasure that I have to question the universal praise of the Tune-Yards’s latest album, WHOKILL. At its best, the album strives to strike out in its own direction, but at its worse, the album seems strangely emptied of new ideas, a cardinal sin for a band that, judging by their assault on rules of capitalization, pride themselves on their ingenuity.

WHOKILL is built around two important elements: the band’s interest in afro-beat rhythms and the schizophrenic vocal stylings of lead singer Merrill Garbus. Rock musicians have been entranced by African rhythms at least since the likes of Adam and the Ants dropped their first album, so it isn’t particularly revelatory several decades down the road. Of course, all musicians build upon their forebears, so Tune-Yards do not deserve demerits merely because they aren’t the first to be influenced by African music. The band’s real problems stem from their execution. The songs themselves are built tentatively on a thin frame, treating their deliberately tinny sounding drums lead each song. This at time seem to conflict with the vocals. Garbus’s voice can hover quietly or burst into a shriek at a moment’s notice. And yet this range never becomes a true asset. Whenever she chooses to let out a full throated yalp she throws the entire affair out of order, overpowering the treacly instrumentation. There are plenty of missteps throughout WHOKILL, but none get under your fingernails as easily as the moment on “You Yes You” where Garbus screams “What’s that about!” like a cartoon character over a thin beat.

But perhaps the most unsettling aspect of WHOKILL is the sense that Garbus is performing, metaphorically, in blackface. I certainly have no inherent problem with the kind of cross cultural pollination that Tune-Yards are trading in. Without different cultures borrowing from one another, then none of my favorite musical forms would even exist. However, when a white girl begins singing in a faux patois and appears to be speaking from the perspective of an urban minority, then we should probably question whether or not she is doing more than just pantomiming for affect. Perhaps the worst offender of the entire album is the song “Gangster,” which uses the following as its chorus: “Bang bang bang oh / Ain't never move to my hood / Cause danger is crawling out the wood.” Again, I actually have no problem with whites taking on the voice of black protagonists when it serves a particular artistic or narrative end, but because Garbus’s lyrics lack any depth—she seems content to merely repeat the same snippets throughout the song—the moments where she takes on a black voice come across as nothing more than affected flourishes. The African (American) experience becomes little more than an aesthetic choice.

The Tune-Yards are currently enjoying a seemingly endless amount of praise. And even if that praise is undeserved, I certainly cannot begrudge them their success. After all, there are plenty of more financially successful musicians who make far worse music. At least Tune-Yards are trying, even though they are not also succeeding. 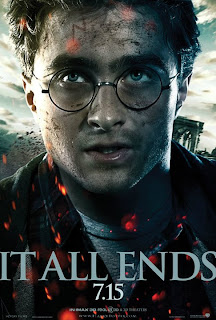 s anyone who has ever turned the final pages and read the last words of a book knows, endings can be bittersweet. Some of my favorite novels only achieve their true power, their true resonance when they are finished. Great last lines seem to echo for a time long after we have finished reading them. And while this feeling is not absent from certain films, there is a reason why a sense of continuance is associated more with the novel than with a movie. While a movie may last, on average, two hours, it takes many hours and days to finish most novels. When reading a novel we live with the characters for a time. We get to know them, to understand their inner life, their goals and fears. Perhaps the greatest compliment that can be paid to Harry Potter and the Deathly Hallows Part 2 is that when the credits roll it feels as if I have turned the final page on a very, very long book.

The final installment in the Harry Potter series, HP 7.2 for short, feels like part of a whole not only because it follows seven other films, but because it is in fact the second half of one film. In many ways it is impossible to separate Deathly Hallows 1 and 2, but because I haven’t watched the first half since I saw it in theaters several months earlier, this review will by necessity be somewhat incomplete. My guess would be that watching both parts back to back would only enhance both films. But even when disconnected from the first half, HP 7.2 serves as a rousing, emotionally engaging film that ranks alongside some of the best installments of the series.

One of the chief complaints concerning HP 7.1 centered on the wandering section, which many (although not me) thought was amorphous and unnecessary. Those critics should be pleased to discover that part 2 stuffs plenty of action into its relatively short (for a Harry Potter movie) running time of a little over two hours. Much like its obvious inspiration Return of the Jedi, HP 7.2 functions almost entirely as a third act climax. As the movie begins Harry, Ron and Hermione are licking their wounds after their encounter with Bellatrix. They know of another Horcrux, which must be obtained and destroyed if they are to stand a chance against Voldemort, but it is unfortunately hidden in a guarded vault stuffed deep into a cave, which also happens to be owned by the Lestranges. In order to gain access to the vault Hermione uses a potion to transform herself into the very image of Bellatrix Lestrange. Ron trusses himself up as a random henchman while Harry and the Goblin Griphook, who has agreed to secret them into the vault, both hide under the trusty cloak of invisibility. Naturally, not everything goes to plan (a constant of the Potter universe that Ron happens to comment on), and, in one of the finer escapes of the series, the trio end up fleeing the vaul

t on the back of a dragon.

From here the heroes must infiltrate Hogwarts in order to free the school from the tight fisted control of Snape. Under his guide, Hogwarts has been transformed into a kind of Voldermort’s Youth program. Borrowing from Riefenstahl by way of George Lucas, students at this new Hogwarts gravitate towards each other to form rigid geometric squares, a far cry from the chaotic hallways of yore. Upon reclaiming Hogwarts, student and teacher alike prepare for an oncoming assault from Voldemort. The final battle more or less encompasses the last half of the film, and the genre shift into a siege film is a nice change of pace, kind of an Assault on Precinct Hogwarts. The siege is deftly handled, and because most viewers are familiar with the geography of Hogwarts campus we are already aware of each ingress and egress that must be defended. This is a Harry Potter film, so there are twists that I won’t spoil, even if in all likelihood most fans have anticipated watching these surprises unfold on celluloid after reading the final book several years ago.

Perhaps the trickiest move a final film in a series must accomplish is to provide a compelling story on its own while paying homage to moments from the past. To this end, the movie shuffles in legions of creatures, locations, and items from the first six films. When Ron and Hermione revisit the chamber of secrets or when Harry makes use of the Pensieve, one can’t help but get a little nostalgic for all of the adventures these characters have shared within the seemingly boundless halls of Hogwarts, a school so vast that it has nearly house the entire Harry Potter epic. Carefully folded into the landscape, each little easter egg serves to recall adventures from a much simpler, less tortuous time in the Potter myth cycle. By trusting the audience to pick up on these signifiers of the past, HP 7.2 smartly chooses not to indulge in too much speechifying, instead choosing to let the action do the talking, this time choosing to resolve the plots of lovelorn teenagers on the go. 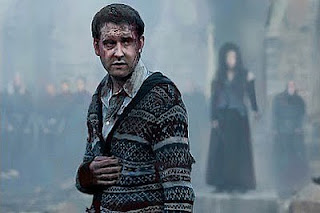 But the biggest surprise of the film might be the central place Neville Longbottom holds in the chaotic proceedings. Critics like to remark, with good reason, that the three main actors have grown to be surprisingly adept at their craft, inhabiting their characters with tremendous ease. What gets left out of this well worn observation is that the same can be said of Matthew Lewis who has had to bear the thankless task of portraying Neville while sporting fake teeth and at times wearing a fat suit. Lewis does a phenomenal job of portraying Neville as a once tertiary character who rises to the role of hero when time and events call on him. In many this transformation becomes the heart and soul of HP 7.2.

The fact that Longbottom could become such a highpoint of the final Harry Potter film speaks to the depths of Rowling’s creation. For her each character was the hero of his or her own story, and just because we were not always privy to these adventure did not mean they were any less important than what was happening to the big three characters. The Harry Potter series will go down as a singular achievement, a story that spans seven film and twenty hours while suggesting that even more is happening beyond the frame of the camera. It is a testament to each director that they not only understood Rowling’s vision, but that they truly understood the collaborative nature of filmmaking. A story so large deserves many authors, from each director, actor, screenwriter, Rowling herself, and every myth and legend she soaked up over the years. And even though it is sad to see the story end, the world these authors constructed seems so vast that I cannot help but think that the narrative continues for each characters long after the credits roll.