Deerhunter, Times New Viking, Vivian Girls (live)
The evening opened with Vivian Girls, a stealth band I didn’t know was even on the ticket. The trio of, as you might guess, girls (a defining feature of rock bands that will, hopefully, become common enough so that it no longer merits mention) play a lean version of garage-punk. Rumor has it that their debut album barely breaks the twenty-minute mark. Despite their lack of numbers, their songs are punky walls of sound, which lent some difficulty discerning vast differences between songs as their set progressed. The less poppy songs utilized flatlining melodies that carried a single monotone note for as long as possible, but to surprisingly effective results. Of course, there was a brunette, a blonde and a redhead, but since that seems to be mandatory these days I’m guessing there was at least one dye job.

Seeing Times New Viking a second time this year gave me the opportunity to go back and revisit their third album, Rip It Off. While the album was on heavy repeat for months, eventually as the songs became familiar enough I relegated it to the second string. I’m happy to report that Rip It Off still kicks ass. Times New Viking debuted several new songs during the evening and just like everything else they’ve written they were easily discernible pop songs that felt familiar without heisting another style whole clothe. Times New Viking has the dubious honor of being the only band I’ve seen who sounds clearer live than on their records. I know more than a few fans who bemoan the fact that Times New Viking’s punk songs are muffled behind tape hiss and fuzz.

For me their recording practices help give their songs added texture, but that doesn’t mean I don’t look forward to hearing them live. I’m not sure if it was the fact that they were the warm up band this time, or the fact that they had a much bigger crowd waiting to hear them (instead of waiting for the band after them), but they were a more active live band this time around. It appears that the keyboardist, Beth Murphy, has realized that despite the fact that drummer, Adam Elliott, sings a majority of the songs, because she’s not trapped behind a drum set that means she is the frontman by default. It could have also been that the band was just that much more excited during this particular visit to Boston thanks to that underpublicized election. Adam at one point told the crowd proudly that they were Times New Viking from the “blue state” of Ohio.

Following two bands that were trios, it was a little imposing to see no fewer than fi 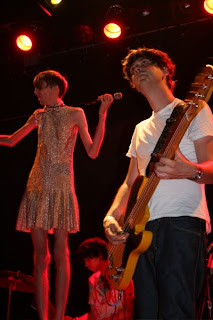 ve members of Deerhunter take the stage. There were three, count them, three guitars on stage at once. I can honestly say that with the imposing force of three guitars Deerhunter's sonic density made Vivian Girl's "wall of sound" seem more like a chain link fence of noise. The word I would use to describe Cox’s stage personality is humble. He thanked the crowd and his tone of voice suggested the look of a farm boy coming to the big city when he claimed he was surprised by how excited the crowd was.

The new songs sounded great, the new element being doo-wop harmonies dropped into Deerhunter’s already over packed sound. Of course, the new songs weren’t the only surprise. I was caught off guard when I heard what shape their old songs took. “Lake Sumerset” sounded less like Flipper and more like New Order. I guess Deerhunter are ready to show that songs like “Strange Light” weren’t anomalies and that underneath their cacophonous veneer is a real fine pop band.
Posted by Tom Birkenstock at 11/22/2008 10:28:00 AM No comments: