The Grunge Legacy
As a child of the nineties I am indebted to the Seattle sound. If it wasn’t for the alternative explosion lead by Nirvana and Soundgarden then who knows what I would be listening to these days? These days I find myself hanging out with people who are mostly into independent music (indie hip-hop, punk, rock, or whatever), and it comes as

a genuine surprise when people actually listen to pop music. I was at a job interview the other day and was shocked to hear some twenty-something guy talking about how much he liked Shakira and Christina Aguilera. I was generally taken aback. How could this be? I suppose the fact that pop stars find their way onto every television channel (from the occasional music video to prime time interviews) that the fact they they have a following outside of teenage girls shouldn't be that surprising, but I’ve always thought that the late-nineties pop explosion was merely a reaction to the movie Titanic’s ability to tap into the pre-teen and early teen female demographic. I thought teenage girls were targeted and they were the only ones who listened to pop music. I had no clue that people in their twenties actually listened to this shite. I didn’t know what to say – I had momentarily lost any vocal functions. He might as well have told me he hated Jews and was a reincarnation of Goebbels.

I secretly fear that without the Seattle sound I too would be listening to Shakira and Christina Aguilera. I shudder to think of myself in a parallel universe with the Pussycat Dolls on my i-pod. I would be forced to hang myself from my feet and then ritualistically eviscerate myself. However, in this universe I’ve been saved from bland music thanks to the nineties alternative boom. While pretty much all of the bands I listened to during the early nineties were on major labels, without them I would never have been drawn to independent music. The Seattle sound was my gateway drug.

Because I hold much of grunge music with esteem (specifically the big four: Nirvana,

Soundgarden, Melvins, and Mudhoney) I’m disappointed to hear people equate bands like Creed, Staind, and Nickelback with grunge music. If I had it my way, nothing outside of Seattle from the last half of the eighties to the first half of the nineties would be considered grunge. However, I am willing to compromise and give a broader definition: a mixture of punk and metal. This obviously does not cover all of the bands from Seattle during the given years, but it’s the closest definition I’ve ever read. Some bands were plain punk (Fastbacks), others dabbled more in classic rock and psychedelia (Screaming Trees), and still others did something entirely different (Earth). Just about any definition is going to fail because grunge wasn’t necessarily a genre, it was a scene. People were making music they liked and weren’t as beholden to a specific sound as the media would have suggested. Furthermore, when I say metal I’m mostly referring to the proto-metal of Led Zeppelin and Black Sabbath, and when I say punk I’m often talking about attitude towards production or approach to music. The Melvins were a punk band, but they didn’t sound anything like late seventies punk. If that makes sense to you, then you have a good handle on grunge.

In order to stymie the rumors that grunge has become a bunch of sappy marble mouth retreads I have created a list of bands who I believe are carrying the grunge legacy forward. Some are bands who have consciously borrowed from grunge and others merely take a parallel approach. I have even included some highlights of grunge bands still making great music. The following is the true grunge legacy:

Queens of the Stone Age

Toungue-in-cheek metal meets hardcore punk mania. Queens of the Stone Age sound like the natural evolution of grunge. What’s important about QotSA is that they don’t take themselves too seriously. Most people today think of grunge in terms of a dirty long haired kid strumming his guitar and feeling sorry for himself. This is a misconception brought about by the number of imitators that sprung up after grunge made it big. Just because Candlebox didn’t have a sense of humor doesn’t mean real grunge is humorless. Look at The Melvins who self consciously went over the top in emulating metal, or look at Nirvana lyrics that are filled with humorous dadaesque self-contradictions. The vast majority of grunge bands did not take themselves as seriously as the media thought – they just weren’t in on the joke.

Sleater-Kinney
While I’m tempted to say that Sleater-Kinney represented the more punk side of grunge, that’s just not true anymore. Their newest album, The Woods, takes its cue from Jimi Hendrix and Led Zeppelin, which in turn takes punk to a whole new level. Also, like Soundgarden and The Melvins, Sleater-Kinney constantly get better on repeat listens.

Comets on Fire
Comets on Fire sound like Jimmy Page met Johnny Rotten in a back alley and only one was going to survive. Comets combine classic rock sounds with the proto-punk production and attitude of bands like The Stooges and MC5.

Isis
Isis is a sludge metal band that ends up being far more accessible than something like Earth, but still manage to push metal to its far reaches. In many ways grunge was merely taking punk and metal into places they’ve never been before.

Fantomas
Mike Patton is a consistent collaborator with the Godfathers of Grunge: The Melvins. I believe that Fantomas is Mike Patton’s most successful band (how many bands does he have, sixty-five?). Fantomas music can run the gamut from seventy-eight minute tracks of horror movie ambience to short bursts of punk energy. Named after a villain from a series of French novels, Fantomas do not fear evil – they incite it.

Pelican
While they could have picked a more imposing bird (was albatross taken, because that would have been a great allusion), Pelican are a formidable sludge metal band. They’re often referred to as Isis without vocals, but listening to their music you can tell they have their own brand of noise to kick out.

Modest Mouse
Okay, maybe Modest Mouse doesn’t sound like grunge, but like grunge you can hear the rainy Northwest weather in their music – especially in their early albums. I find it interesting when you can hear a region in a bands sound. I can never separate the Meat Puppets from the Southwest, for example.

Foo Fighters
Dave Grohl’s Wings project. Actually, Foo Fighters aren’t as bad as their detractors claim. Sure, they can get sappy at times, but check out The Colour and the Shape. That’s a great pop-rock album.

Local H
Local H make straight ahead blue collar rock and roll. Of all the non-Seattle bands that sprung up in the grunge aftermath Local H are easily the best. They may have had only one major hit, but unlike Stone Temple Pilots, Candlebox, and Collective Soul they didn’t feel like watered down grunge. Instead, Local H always sounded as if they just happened to have similar influences as the original grunge bands. They’re also the best live show I’ve ever seen.

Mark Lanegan
Mark Lanegan of the Screaming Trees has released several of his own solo albums. He has also collaborated with Queens of the Stone Age on many occasions. This proves that grunge wasn’t a flash in the pan, but a movement with dedicated and talented musicians.

The Melvins
Wait, you say, grunge is still around? The Melvins have been kicking it for years, and still sound better than any indie/pop rock band NME is pushing these days.

Mudhoney
They’re like The Ramones of grunge, but their music has evolved ever so slightly. Don’t hold that against them, Mudhoney still goes off.

Earth
Looking back on this list it is amazing how influential Earth has become. Sludge-metal and all of his relatives have gained a little foothold on independent music. This would not have been possible without bands like Earth. They are without a doubt the most bizarre grunge band. Their more resent releases still sound decades ahead of other experimental metal bands. That’s not to disparage those bands, but merely to show that Earth is still ahead of its time.
Posted by Tom Birkenstock at 6/21/2006 05:49:00 PM No comments: 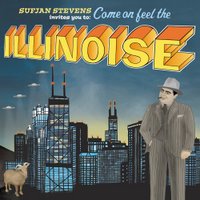 Sufjan Stevens - Illinoise (2/5)
When I first threw Illinoise into my CD player it took me a couple of songs to form a reaction: wow...this is really bad. By the time I bought the CD Sufjan Stevens had received an ungodly amount of hype, and I was ready to sit back like in those decade old commercials and be blown away by my audio equipment. Too bad Illinoise wasn't up to the task.

The first thing I noticed about the album is how the production makes much of it sound limp. The production reminds me of a Coldplay album where the songs have their rough edges sanded down. If you're going to make use of this many instruments, then I want to be reminded of Mahler and Prokofiev not Chris Martin.

While there are a couple of standouts (I recommend downloading "Chicago") there's just not enough high points in the twenty-two tracks to recommend the album. The lyrics are too often overtly self-conscious and overwrought. One of the worst offenders is "John Wayne Gacy Jr." The idea itself is interesting: try and create sympathy for someone who has committed atrocious acts. However, Sufjan isn't clever enough to pull this off in a three minute pop song. When talking about Gacy's victims he directs a hushed "Are you one of them?" at the listener. The results are laughable at best. Imagine the following line delivered with utmost earnestness and a fist clutched to the singer's heart (at least that's how I picture it) and you'll get an idea at how ridiculous his songs can be: "And in my best behavior/ I am really just like him/ Look beneath the floorboards/ For the secrets I have hid." Trying to create a sense of connection and empathy with a monster is an interesting idea, but Sufjan Stevens just can't do it without being overly sappy.

The amount of hype this album has gotten insures that Sufjan will have a few more albums critics can overhype and then forget. I'm just hoping that he gives the whole state theme up before he reaches my home state of Ohio. If you screw that one up Sufjan, then don't expect us to go easy on you.
Posted by Tom Birkenstock at 6/18/2006 04:22:00 PM No comments: