Maps and Legends by Michael Chabon 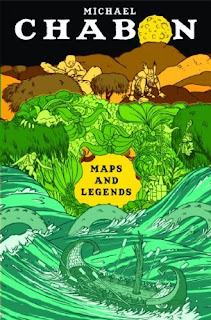 Maps and Legends by Michael Chabon (4/5)

Central to each essay that makes up Michael Chabon’s collected work of non-fiction, Maps and Legends, is the notion that genre fiction—including gothic horror, noir mystery, dystopic sci-fi, sword and sorcery, etc.—has been regulated to the ghettos of literature and abandoned by writers with any pretense to literary seriousness. Instead of learning to enjoy the sensation of goose bumps on our skin while reading a ghost story or the heart palpitating shock found at the end of a Victorian mystery, readers and writers alike have learned to ignore the joys of these visceral sensations for what is considered the more cerebral pursuits of the Joycian short story, replete with inner musings and epiphany inducing endings. Chabon believes this distrust of genre as serious literature is tied to the negative connotations associated with “entertainment,” which he describes as a word that “wears spandex, pasties, a leisure suit studded with blinking lights.” We have learned to distrust anything whose primary purpose appears to entertain us.

Of course, despite being tied to images of ivy covered brick buildings, stagnant classrooms and tweed jackets, even James Joyce’s short stories have immense propensity for entertainment. Chabon understands that entertainment is found not only in the unseemly pages of genre fiction but in all works of literature, despite how esoteric they may at first seem, and he proposes “expanding our definition of entertainment to encompass everything pleasurable that arises from the encounter of an attentive mind with a page of literature.” He is attempting to expand the definition of entertainment, so that it may appropriately describe both reading Poe under a blanket with a flashlight and reading T.S. Eliot in one of those ivory towers while sipping on a pipe, while simultaneously refusing to dilute the definition. It is equally subversive to describe Neil Gaiman as entertaining as Herman Melville as it is to describe Herman Melville as entertaining as Neil Gaiman.

Chabon makes this argument in the book’s first essay, “Trickster in a Suit of Lights: Thoughts on the Modern Short Story,” and it is from this essay that all others in the book spawn. Because he refuses to define genre in pejorative terms, Chabon is given the authority to write an elegiac rumination on the comic book pioneer Will Eisner’s death or discuss Cormac McCarthy’s The Road in terms of its relation to other novels of apocalyptic science fiction. The following fifteen essays serve to reinforce Chabon’s literary worldview, and it becomes apparent how arbitrary it is to regulate one genre outside the realm of serious literature while keeping other genres within the confines of literary good taste. After all, the epiphany ending short stories of Joyce and Hemingway are a genre in themselves. In the essay “The Other James,” about the ghost stories of M. R. James, Chabon points out that Balzac, Poe, de Maupassant and Kipling—no minor figures within the literary canon—all wrote ghost stories, a genre that has been shuffled, under point of gun, to the confines of the genre ghetto. While maintaining one’s literary credentials, a graduate students can analyze The House of the Seven Gables through a New Historicist framework, but don’t you dare get caught reading the latest Steven King novel on the subway.

The collection is not without its faults. And while Chabon is a consummate novelist, I feel he has always struggled in more constrained mediums like the short story or essay. Many of the works in the second half of the book feel slight, as if there was some unifying concept that was lopped off the end. Or, to use a genre metaphor, these essays feel as if the two plots of a detective noir story never converge into one by the end of the novel. The slight frame of his lesser essays seem incapable of holding up Chabon’s thickly woven prose. However, when he is at his best, Chabon’s thoughts reshape how genre is viewed by everyone from the casual reader to the acolytes of literary critics like Bloom and Frye. At the very least Maps and Legends will give many the courage to keep the book jacket on that collection of post-apocalyptic-mystery-ghost-stories when they are reading in the park.