Splinter of the Mind's Eye

Splinter of the Mind’s Eye by Alan Dean Foster (⅗)

Imagine a world where Star Wars wasn’t a genre-busting, blockbuster-inventing megahit.  Imagine if Star Wars were merely one in a long line of 70s sci-fi films beloved by a cult audience but mostly forgotten by the general public, such as Logan’s Run, Omega Man, Soylent Green, Silent Running, Rollerball, or even George Lucas’s own, THX 1138.  In this world, the dark challenging sequel, Empire Strikes Back, is never made, and instead, Lucas and Fox opt for a quick follow up to A New Hope by making a small scale movie that takes place on a single planet and includes only about half of the original cast.

We came much closer to this world than many realize.  Alan Dean Foster, author of countless movie adaptation novels, was first enlisted into the Star Wars universe after being commissioned to ghostwrite the first film’s novel adaptation.  Lucas also provided Foster with details regarding a possible sequel and asked him to write the novelization.  When Star Wars blew up, Lucas was able to fund Empire himself and no longer needed the compromised continuation, so Splinter of the MInd’s Eye was published in 1978, essentially becoming patient zero in the Star Wars expanded universe.

As Splinter of the MInd’s Eye begins, Luke and Leia are racing to Circarpous IV to convince the local populace to join the Rebellion when a giant energy storm forces them to crash land on Mimban, a fog-enshrouded swamp planet and a clear influence on Dagobah.  While looking for a means off the planet, Luke and Leia encounter an old woman in a bar who senses Luke’s Force sensitivity and tells him about the Kaiburr Crystal, a New Agey mineral that enhances its user’s Force power.  The old woman, Halla, is herself Force sensitive, but is only able to slightly move objects after a great deal of physical and mental exertion.

Mimban is being used as an imperial mining operation, so Luke and Leia have keep a low profile, which becomes difficult after they become embroiled in a fight with the locals.  Halla manages to avoid capture, but Luke and Leia are taken to an imperial prison.  They’re lucky enough to become cell mates with Hin and Kee, two ferocious and furry Yuzzem, creatures who share more than a few similarities to Chewbacca.  With a little help, Luke and Leia perform a prison break and head into the Mimban wilderness in search of the Kaiburr Crystal.

Because Splinter of the Mind’s Eye sprung from ideas intended for a cheapie sequel, the novel at times feels restrained.  Foster had originally planned to open with a large space battle that would have grounded Luke and Leia, but this was deemed too expensive for the proposed sequel and excised from the novel.  The decision to make Mimban a foggy swamp planet had less to do with creating atmosphere than limiting the need to build more sets.  And, more conspicuously, Han Solo and Chewbacca are absent from the plot altogether (although Han is alluded to a couple of times).  When writing began, Harrison Ford had not yet signed on for any sequels.

While it’s unfortunate that Foster wasn’t able to fully indulge his imagination like most novelists, in other ways the novel benefits from the more limited scope.  Foster had the right idea initially to begin with a space battle, because, quite honestly, the story takes some time to gain momentum (for whatever reason, it takes days to get anywhere on Mimban, which may have been realistic but saps some of the energy from the plot).  Still, once events start rolling, the focused plot speeds our characters along, and I would have much rather read about Luke and Leia uncovering an archaeological MacGuffin than have them contend with yet another super weapon.  After escaping from the imperial prison, Luke and Leia are constantly on the run, often chased by aggressive indigenous life forms, including a giant worm, a cave-dwelling water creature, and a deadly giant lizard.  During the last half of the book, the two descend further into the caves of Mimban in what appears to be an echo of Edgar Rice Burrough’s second John Carter novel, The God’s of Mars.

Foster spends much of the novel detailing the sexual tension between Luke and Leia, a decision that has a certain ick factor considering that they are later revealed to be brother and sister.  Of course, it’s likely Lucas hadn’t come up with this plot twist yet, or he may have thought it a possibility but didn’t want to implement it in a world where the first Star Wars sequel is Splinter of the Mind’s Eye and not The Empire Strikes Back.  And even if Luke and Leia doesn’t go to the same length as King Arthur and Morgan le Fay and even if incest is a common theme in mythology, it’s still pretty damn creepy.  It doesn’t help that every now and then Foster offers up lines like this: “Even when bothered, to him that voice was as naturally sweet and pleasing as sugar-laden fruit.”  Most people can look past the chaste kiss between brother and sister in Empire, but I think produce metaphors are just a bridge too far. 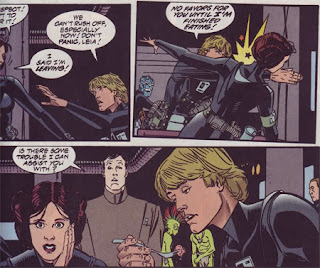 The relationship between Luke and Leia is characterized by the difference in their social standings as, respectively, farmboy and princess.  This speaks to Foster’s understanding of the archetypal cutouts that form Lucas’s characters.  He even refers to the late Ob-Wan Kenobi as a “wizard.”  Unfortunately, Foster too often presents Leia not so much as royalty as stuck up.  There’s a sense throughout the first half of the book that she needs to be taken down a notch, which happens when Luke unilaterally comes up with a cover story for the two, which involves Leia being his slave.  In order to make the cover story work, Luke even slaps Leia around a bit.  (Yes, Luke actually slaps Leia in this book, or as Luke says to a local, “[S]he’s kind of amusing to have around, though she tends to get out of line at times and I have to slap her down”).  There’s an undercurrent of misogyny here, like a latter day retelling of The Taming of the Shrew or, if you prefer, an earlier version of Overboard.  Luke is the typical geek in the sense that he both elevates and resents the object of his affections.

Of course, the films themselves have always had difficulty using Leia.  The film that treats her with the most respect is probably A New Hope where she gets to bark orders to the men and handle a blaster.  Splinter of the Mind’s Eye does slightly make up for its earlier mishandling of the character by giving her a lightsaber fight with Darth Vader at the climax of the story.  The novel also deals with the PTSD Leia suffers from being tortured on the Death Star, something that Vader later brings up to taunt her and adds menacingly, “one can do some interesting things with a saber, you know.  I’ll do my best to show you all of them if you’ll cooperate by not passing out.”

The novel does pick up after some of these early missteps, and there are some interesting additions to the Star Wars mythos.  The Kaiburr Crystal was apparently detritus from an early draft of A New Hope.  Lucas decided that he wanted to make the Force more ethereal and mysterious, which I think most believe was the right call.  But I still like the implication that the crystal was used in healing rituals by the natives generations ago.  The novel also introduces the idea that even long, long ago there was a time even farther in the past.  The Knights of the Old Republic’s Korriban section also relies on the idea that Force related relics are buried throughout the galaxy, which makes George Lucas’s universe even more expansive. 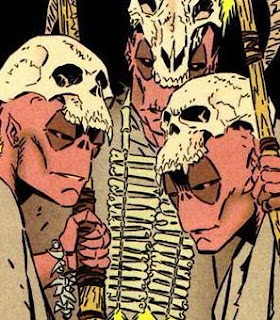 Hin and Kee, the Chewbacca stand ins, are also a great addition to Star Wars.  At one point they take a stormtrooper’s helmet to shield their hands while trying to break through a security door and also swing a droids body around to club stormtroopers.  The native Coway, who eventually battle with the Empire with the help of Luke and Leia, are also an interesting precursor to Return of the Jedi’s Ewoks.  The Coway are pulled directly from an H. Rider Haggard novel, and are presented alternatingly as savage and noble savage.  Naturally, Luke must fight one of their champions in order to earn their respect and avoid execution.

In an odd choice, Vader receives scant time in the story.  Perhaps Lucas didn’t want to overuse the character and instead treat him like Boba Fett, a mysterious figure of evil who is only more intriguing because we know so little about his backstory.  If this was the intention, then the prequels ruined it on both counts.

It is interesting to see how Vader is represented prior to the shocking reveal in Empire.  Foster refers to Vader as a henchmen at one point, which is an accurate representation of his character in A New Hope before he started running through admirals at an alarming rate in Empire.  Tarkin is the main villain in the first film, and Leia describes as “holding Vader’s leash.”  Vader is still represented as an imposing figure, and is referred to as a “dark lord of the Sith,” a concept that I didn’t realize entered into the Star Wars mythos this early.  (Apparently, the term Sith is also used in Foster’s A New Hope novelization). In a weird continuity error, Vader accuses Luke of shooting him out of the sky during the Death Star battle, but we all know it was Han Solo.  Come on, Vader!  Luke was in front of you.  That doesn’t make any sense.

Reading Splinter of the Mind’s Eye, I couldn’t help but imagine how this might look as a low budget Star Wars sequel, and while I think we can all agree it’s good this never happened, there are

moments that might have translated nicely to the screen, especially when Luke and Leia float across an underground lake on a giant leaf.  It makes sense why Dark Horse would later create a comic book adaptation of the story.  At its best, the novel reminds me of another beloved fantasy story that takes place in a swamp and involves an old crone and a crystal: The Dark Crystal.  Splinter of the MInd’s Eye is not a lost masterpiece by any stretch of the imagination, but it’s a fun read (even the terrible moments are enjoyable), and for anyone who wants a different perspective on the Star Wars phenomenon, it offers a fascinating glimpse into a world that could have been.  Besides, without the novel we wouldn’t have had Ralph McQuarrie’s genuinely kickass paperback cover. 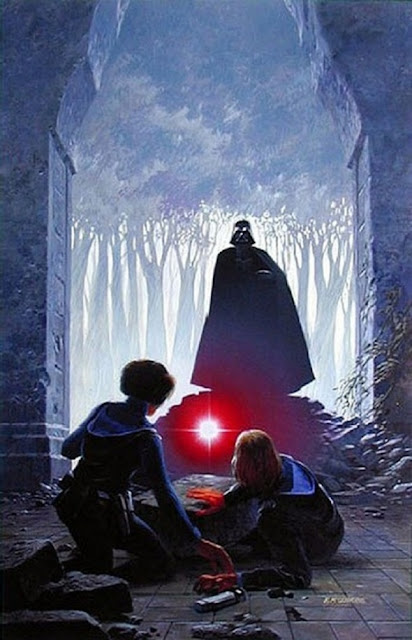