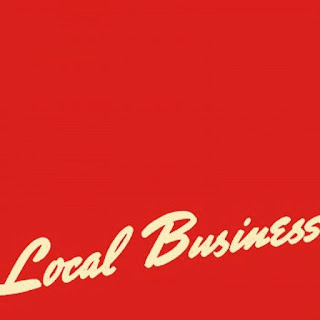 What can you possibly do to follow up on a masterpiece?  This question must have invariably hovered over the group Titus Andronicus when they were faced with crafting another album following their epic, The Monitor.  The Monitor fits the definition of a masterpiece so snugly that I wouldn’t be surprised if lead singer Patrick Sickles and his gang had struggled with the above question for quite some time before deciding to go into the studio and write a straight up rock album.

Local Business, Andronicus’s third album, sees the band trying to rein things back somewhat.  Gone are the readings of Albert Camus or the overarching historical thematics.  Instead, the band has replaced its prog-rock ambitions with a renewed focus on autobiography.  Sickles’s lyrics revolve almost exclusively around the life of a twenty-something as well as strictly personal issues like his struggles with a rare eating disorder.  The result is decidedly scaled down.  There’s nothing inherently wrong with attempting to strip things down, but at times the old tricks Androncus could rely on for their older albums don’t work quite as well in this setting.  Their use of a continual refrain, which used to sound energetic, can now sound somewhat tired.  Smaller interludes, which in earlier albums had served as a connective tissue for their grand themes, now sound like they’re stalling for time.

The subject that Sickle returns to again and again is his own body.  The body becomes a means for escape and something that he is trapped within.  Sex and alcohol and their bodily impact serve as a means to flee existential questions, a means to escape from the oppressive life of the mind.  And yet, at the same time, there is a sense that the body itself is also a trap.  The first song off the album, “Ecce Homo,” is a reference to a genre in classical art that depicts the torture of Jesus and translates into “Behold the Man.”  In it Sickles sings, “We’re breaking out of our bodies now / Time to see what’s outside them.”  But his attempts to escape his body appears to be refuted later in the song “My Eating Disorder,” where Sickles recounts his struggles with selective eating disorder.  No matter what, he doesn’t seem capable of thinking his way outside of the choices his body has made for him.

There’s no doubt that Titus Andronicus are a bright group of musicians who will leave behind them a great oeuvre.  And even if Local Business isn’t as impressive as their last two outings, there are some fantastic tracks here.  “In a Big City” is the kind of Pogues meets Springsteen that we have come to expect from this band.  And “I Am the Electric Man” is a surprisingly effective left turn into the realm of what can only be described as Motown R&B with a ragged edge.  Overall, Local Business isn’t a bad stop gap between now and Titus Andronicus’s next magnum opus. 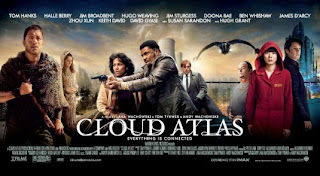 Cloud Atlas is that rare Hollywood artifact: a big budgeted work of art that also happens to grapple with cosmic level questions at the center of human existence.  The film is absolutely sincere in the sense that these questions of how we fit in the universe and what we mean to each other are clearly foremost on the mind of the directors.  And the plurality of the word director is important, since it took no less than three people helming this monstrosity in order to bring it together: Andy and Lana Wachowski of The Matrix fame and Tom Tykwer who is most known for Run Lola Run.  The result is the kind of film that we haven’t quite seen before and most likely (judging by its box office numbers) will never see again.

Cloud Atlas follows six separate storylines across the millennia, and each narrative is nearly rich enough to stand on its own.  In chronological order, we follow a young lawyer, Adam Ewing, who is making a trip back from a slave plantation in the Pacific; a gay composer, Robert Frobisher, who plans on making his mark in the world of music by working for an aging curmudgeon; a muckraking journalist from the 1970s, Luisa Rey, who is working on uncovering what might be another Three Mile incident on the West Coast; a desperate editor, Timothy Cavendish, who becomes caught up in continually escalating series of troubles; a clone, Sonmie, who, living in a future dystopia, slowly learns to question the world she has been programmed to accept; and a tribesman in a post-apocalyptic world who must escort Meronym, a woman from a more advanced people, up a mountain to a nearly forgotten cathedral of sorts. 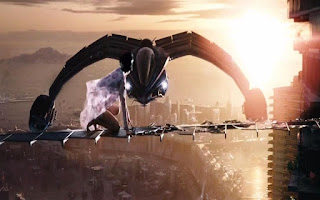 Naturally, this is a lot to fit within a single movie, and the film has an overstuffed running time of three hours.  And yet, the story never felt like it dragged.  As you might guess, the film does not run through each story in sequence (this is the tact of the novel the film is based on), but instead each story is interwoven with the other, creating a much larger tapestry that engulfs any single thread.  Where the novel makes drastic stylistic shifts according to each section, because of the way the stories are cross stitched onto one another, the film doesn’t make similar visual transformations.  But there are clearly delineated genres for each section.  The story of the muckraking journalist has the feel of an era appropriate political thriller like Three Days of Condor, where the dystopian world of clones and dark cityscapes owes a lot to cyberpunk (a genre that the Wachowski’s worked in previously for their most famous creation).  But the directors all come together to make sure that we move nearly seamlessly from one narrative to the other, and we pass through moments of tension in one world only to have it relived by an action sequence in another until we are finally pulled back into a scenario where our nerves have tightened up.  In other words, this film must have been hell to edit.

There is no doubt that the film is an incredible technical accomplishment, but many viewers might ask, what’s the point?  There are a number of curious choices that will leave audiences scratching their heads.  Perhaps the most distracting will be the reuse of most of the principal actors.  From big Hollywood stars like Tom Hanks and Halle Berry to lesser knowns like Ben Whishaw and Doona Bae, the film is sprinkled with a number of major and minor actors who take up a different role in each story.  While this is an interesting theory in practice, the result is a lot of awkward makeup jobs.  It’s difficult to take a story seriously when it looks like a character’s face might fall off at any moment (although, it is nearly worth it see Hugo Weaving don a wig and play a Nurse Ratched type nursing home tyrant).  The poor makeup is a clear sign that the weight of this project nearly crushed its directors, and it’s no surprise that it took three principal artists to carry this thing to completion.

While some might (justifiably) critique the film for how the makeup really shows its seams, others have decried Cloud Atlas for promoting New Agey bull.  And I admit that there are moments where I thought the film was starting to become too granola, but by the end of the movie it had made an end run around my defenses, and I was won over.  There are moments in the film that suggest that these characters are experiencing a form of reincarnation.  But I don’t think the film limits itself to a spiritual reading.  As someone who is skeptical of religious message movies, I don’t think I would have enjoyed this film if could only be read through a spiritual lens.  Recycling actors is more about simultaneously freeing and entrapping these characters in their race and gender.  On the one hand, because the characters switch race and gender throughout the film, it shows ways in which our bodily selves are physical entrapments and social constructs.  The body becomes ephemeral.  But these characters are also socially limited and segmented because of their race.  The 19th century lawyer, Adam Ewing, has to defy his class and gender position in order to establish a friendship with an escaped slave, for example.

Similarly, characters influence each other through real material objects that seem to skip their way down the centuries.  The diary of Adam Ewing ends up in the hands of the composer Robert Frobisher.  In turn, the love letters that Frobisher wrote to his paramour, Rufus Sixmith, are passed down to Luisa Rey, the investigative journalist.  Texts and works of art filter down through the ages, each time providing the current owner a glimpse into the inner lives of others.  The readers of the different texts are drawn to them because they recognize a little of themselves.  The transference of art across the centuries reminded me of the Hindu conception of time.  Where modern Westerners conceptualize time in relatively small chunks—looking at discrete decades or centuries—Hindu beliefs conceive of time on a much larger scale.  Hindu religion gives us the idea of the kalpa, or a single aeon that lasts for 4.32 billion years.  By expanding how we look at time, it also, paradoxically, can change how we see our place in the world.  Instead of viewing ourselves as insignificant, we might ask how small events millennia ago, events we might not have direct knowledge over, affect our present day.  In this sense, our impact on the world might very well outstrip our time living on it. 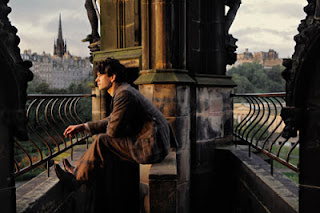 If Cloud Atlas can be defined by any sort of genre, then it is the “everything is connected” movie.  But where others of these films have little more to say than the simple fact that there are a lot of coincidences and event impact disparate people, Cloud Atlas asks us to consider our place in the universe, to completely reconceive of how we look at history, and how art might transcend our subjective realities.  Not every character accomplishes what he or she sets out to do, but rather than being failures, their accomplishments become the inspiration for those who come after them.  When one particularly evil character belittles Adam Ewing’s wish to become a suffragist, calling him nothing more than a meaningless drop in the ocean, Ewing responds with, “What is an ocean but a multitude of drops?”  Tykwer and the Wachowski’s seem to be telling us that despite our insignificance, we matter.  This is an important message, and one that deserves a retelling.  While some critics have been dismissive of Cloud Atlas, there is no doubt that the film, like the letters and manuscripts passed down in the movie itself, will live on, and it will no doubt gain its place as either a cult classic or a lost masterpiece.
Posted by Tom Birkenstock at 11/21/2012 02:19:00 PM No comments: