The Duke Spirit - Cuts Across the Land (acoustic)

Here's The Duke Spirit doing an acoustic rendition of "Cuts Across the Land" at Sonic Boom Records in Seattle. Apparently the lead singer's voice is just as unique sans studio. The cameraman does seem a little too interested in the tambourine, or is it something else he's zooming in on? 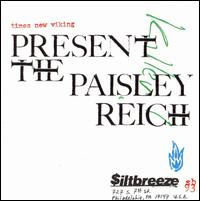 The post-modern fear is that nothing is new. Originality is a farce perpetrated on an audience in order to trick them into believing something is important and they should want it when in fact it’s the same old thing people were listening to a decade ago with different packaging. After you listen to enough music this fear becomes more pronounced and you start to look beyond just the songwriting to the song production. It’s less important what chords are being played than how the band recorded those chords.

Times New Viking’s The Paisley Reich is just as interested in how the music sounds as they are about writing catchy songs. Times New Viking’s take a lo-fi aesthetic to the extreme and much of it sounds like a high school band practicing in the garage…from down the street. I can imagine the bassist succumbing to some Spinal Tap like accident and the rest of the band look at each other and figure they can just cover up his absence with lots of treble. At the best moments I was nostalgic for my ’93 Escort’s blown out speakers.

If Times New Vikings merely used lousy recording to cover for lousy music then they would have overstayed their welcome after the first song. Fortunately they write some damn catchy tunes. It may take a listen or two but once you push through the white noise there’s some wonderful pop songs. In another context “Teenagelust!” could be a summer radio hit and songs like “New Times, New Hope” become addictive thanks to some punchy percussion. The entire fifteen tracks go down in under thirty minutes, which is just as well considering that any longer and the experiment might have degenerated pretentiousness. For the sake of everyone involved the album turns out to be a perfect realization of their experiment.

Times New Vikings gives me hope that some originality exists out there, even if it’s just the same old songs recorded with a new idea. Still, I’m curious as to where they go from here. Do they move on to another noise experiment or maybe they become more accessible? Whatever they decide, this tremendous debut has me anxious to find out what happens next.
Posted by Tom Birkenstock at 6/05/2007 08:09:00 PM No comments: