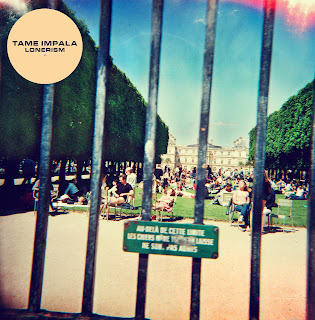 Psychedelia has had a quiet revival over the past several years.  Bands interested in pushing at the limits of rock and roll’s sound have found an ally in a genre that aimed to do just that nearly fifty years ago.  The Black Angels, The Wooden Shjips, and Thee Oh Sees, among others, have mussed up the psychedelic formula by introducing droned out songs or encrusting their music with gravel.  Tame Impala likewise have their own take on the genre that proves that psychedelia still has plenty of life in it after all these years.

Where much of modern day psychedelia is paired with a love for a hardscrabble garage rock edge, Tame Impala makes full use of the studio.  Opening track, “Be Above It,” filters the phrase “I gotta be above it” and its accompanying verses through various means of  electronic transformations while fireworks of noise occasionally go off.  All of these production pyrotechnics could easily tip the album into the darker waters of ELO’s discography.  But what really keeps the album on a steady keel is the fact that at the center of each song is an immediately catchy bass line or keyboard melody.  While chief architect, Kevin Parker, managed almost all of the album’s instruments, there’s a wonderful interplay between keyboards, guitars, and drums that sounds like the work of a full band.  The percussion in particular makes certain that every track bounces along from beginning to end.

But Parker doesn’t get all of the credit.  The album was produced by none other than Dave Fridmann, one of the closest things to a household name when it comes to rock and roll music producers.  Best known for his work with Mercury Rev and Flaming Lips, Fridmann is a natural fit for Parker’s psychedelic ambitions.  I must admit that I’ve always had a mixed relationship with Fridmann’s production.  While I’ve appreciated his quest to open up a band’s sound, his tendency to compress each album to the hilt not only causes ear fatigue but also flattens the sound of the artist.  When there’s no difference in the levels between vocals and drums, then the music starts to lack any depth.  Luckily, the problem of compression is mostly absent from Lonerism (at least by the standards of today’s music).  Perhaps Fridmann has learned his lesson or perhaps he is reacting to the fact that everyone’s compressing their music these days.  Regardless, Lonerism is easily one of the best production jobs of his career.

Thanks to Fridmann’s influence and Parker’s talents, Lonerism makes a unique mark on the music landscape.  While Fridmann’s production wraps up each song in a crystalline cocoon, Parker’s writing skills ensure that, at its center, each song is worth listening to.