A Hologram for the King by Dave Eggers

A Hologram for the King by Dave Eggers (4/5) 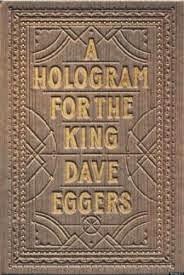 It sometimes seems as if Dave Eggers has made a career our of running away from his first book, the memoir A Heartbreaking Work of Staggering Genius.  Where Heartbreaking was a meta-memoir centered on a self-aware and self-conscious Gen-Xer, his subsequent books have mostly looked outward.  Eggers has made a concerted effort for his work to engage with the world around him and to avoid any of the navel gazing that pervaded his memoir.  While I thoroughly enjoyed Heartbreaking, I’m glad that Eggers’s concerns have turned towards the world at large.  One element that seems to appear again and again in Eggers’s writing is the impact and role of globalization on people’s lives.  This was certainly true in Zeitoun and What is the What whose protagonists found their to from far off countries, and respectively.  But in A Hologram for the King Eggers follows a middle aged American business man as he ventures to .  What results is an intriguing commentary on the economic and psychological effects of globalization on the American middle class.

The main character of Hologram, Alan Clay, is abusiness consultant who formerly worked for Schwinn bicycles before he was let go and they moved business overseas.  Through happenstance he now finds himself working for an I.T. company that plans on presenting a new hologram system to the King of Saudi Arabia.  We spend the entire novel with Clay who can be something of a sad sack.  Ever since leaving Schwinn, he has been a man adrift, attempting to start the manufacturing of a bicycle he has designed but unable to acquire the requisite funds.  He’s low on cash and struggles to pay for his daughter’s tuition, meaning she may be forced to take a semester or two off from college.  Clay wouldn’t necessarily be a fun guy to hang around, a detriment that Eggers attempts to sidestep by approaching the character with both empathy and a dark sense of humor.

Clay is both a victim and perpetrator of his own miserable situation.  His company began looking for ways to cut costs, which at first meant moving manufacturing to less union friendly states within the , but later it meant outsourcing jobs to .  This didn’t affect Clay at first, since he’s a part of management, not labor.  But, as has been the case with globalization over the last couple of decades, outsourcing crept upwards, eating away not only those who toil in factories but also those who toil while wearing business suits.  While Schwinn was looking towards for cheap labor, it turned out that the Chinese also had just as capable salesmen and managers, thank you very much.  In a somewhat roundabout way, Clay had become responsible for outsourcing his own job.

All of this results in Clay making the trek to in order to present a new telecommunications hologram system to King Abdullah and hoping to wrangle his meeting with the King into something more long term.  Except Clay himself is mostly useless.  He doesn’t have expertise in computers, and it is suggested that his value lies only in his connection to a relative of the King’s he knew in college.  Clay and his team of young computer techs spend much of their time sitting in an un-air-conditioned tent without the requisite wi-fi needed to set up their presentation, problems that Clay is too ineffectual to resolve.  Even here he seems to have carried with him his own obsolescence.

The obvious literary influence here is “Waiting for Godot,” and like the characters from Beckett’s play, Clay is continually looking towoards a future event that may never come.  The presentation with the King is continually postponed, and the presentation does not guarantee that the King will grant them the contract or lead to any further business in the country.  And yet Clay continues to chase this meeting all the way to the end of the novel.  Eggers seems to be trying to answer the question, if the world of globalized capitalism has so decimated the middle class in America, then why do the victims continue to prop up this system?  The answer seems to be that a businessman’s present is always mortgaged on a possible future where he has made that one great pitch and secured that one sacred deal.

In addition to other such literary influences—Arthur Miller’s Death of a Salesman and Franz Kafka’s The Castle—Eggers also borrows from F. Scott Fitzgerald’s The Great Gatsby.  Much like the titular Gatsby, Clay finds himself searching for the American dream.  Where Gatsby had to find the American dream through illegal means, Clay searches for the American dream outside of .  One particular scene in Hologram owes a heavy debt to the description of Gatsby’s opulent parties.  Clay is invited to a gathering of foreign expats working in and when he arrives discovers a horde of middle age men and women imbibing more than they can handle and generally acting like teenagers.  At one point during the bootleg bacchanalia, a man decides to done an astronaut costume as a joke.  As he floats around the gather, he comes to represent an emptied out past, a mockery of what was once capable of accomplishing.  One worker admits that he hasn’t built any major projects in the in some time.  As their own nations collapse under the pressure of global forces, this gathering of Westerners seems only capable of regressing towards childhood.

Of course, even these displaced workers have it easy compared to the labor necessary to build the massive complexes that they are designing and pitching.  At one point Clay stumbles across a roomful of indigent laborers in a half-built condominium.  The men are living in squalor and are less than pleased about Clay’s intrusion.  (I couldn’t help but think of the moment in The Trial where K. discovers the two agents who served him being whipped by a superior in one of the rooms where he works.)  And Clay’s father was once a union-protected manufacturer.  Naturally, Clay would be responsible for outsourcing these kinds of jobs before losing his own.

Hologram at times trades in a kind of pessimism that’s absent from most of Eggers’s output, but Eggers doesn’t view globalization as a monolithic wrong.  As you might guess from someone who has written about the possibility of helping others, he sees real possibilities in our ever shrinking world.  Clay strikes up an unusual friendship with his driver, a Saudi Arabian that spent some time in the States while attending university.  He also has a growth removed by an international collection of doctors, one of which is a female Saudi doctor.  There’s definite nuance in Eggers’s depiction of the lived experience of those experiencing global economic upheavals, for those willing to look, anyway.

While not everything works in the novel—Clay seems too pathetic to strike up a relationship with two separate women—it still manages to evoke a sense of immediacy as it engages with our ever-changing world.  Hologram isn’t Eggers’s best book, but it points to how literature—a term that conjures up dust-gathering tomes on a shelf—can get in the ring and duke it out with other genres desperately trying to explain our world.  The novel is capable of representing economics with far greater detail than a sloppily written New York Times op-ed or better expresses the lived experience of those affected by godlike forces of the market than an academic paper.  If nothing else, Eggers’s work, as a whole, tells us that the written page and lived reality are constantly entwined.
Posted by Tom Birkenstock at 7/06/2014 04:02:00 PM No comments: