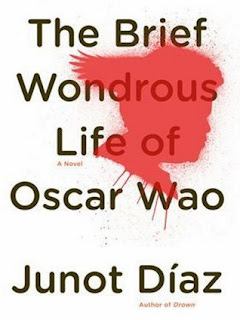 The Brief Wondrous Life of Oscar Wao by Junot Diaz opens with the epigraph, “Of what import are brief, nameless lives…to Galactus??”  Any fan of Stan Lee and Jack Kirby will know immediately that these words are uttered by the Marvel character, Galactus, the devourer of planets.  But for those who are not as steeped in comic book lore, Galactus is a gigantic, godlike alien from before time who wears what looks like an Inca headdress combined with a Tesla coil for a helmet and also appears to sport a mini-skirt and leggings.  Galactus strolls around the galaxy looking for new worlds to consume.  Contained within the quote is the question of our place within the universe and what a singular life means buried in the expanse of time and space.  The quote also signals that Junot Diaz is a cultural omnivore, consuming literary and popular works from high and low.

The epic, universe spanning epigraph prepares the reader for a story of Oscar de Leon, a Dominican-American living in New Jersey who is culturally suspended between his Dominican heritage and his love of geek culture.  Oscar is cursed to be both a hopeless romantic and completely incompetent with women.  He is subject to fits of depression and struggles with his weight.  But, as Diaz’s epigraph suggests, Oscar is also the subject of much larger forces.  Early on Diaz introduces the concept of fuku, a kind of New World curse that was initiated with Columbus’s arrival.  Oscar’s tragic, infinitesimal story is in fact a single element in a much larger story that stretches back several generations to the Dominican Republic.

Diaz juggles a number of interlocking narratives, presenting events at different periods of time in the De Leon family’s history, and he switches perspectives several times, from a chapter told from the first person perspective of Oscar’s sister, Lola, to a letter written by Oscar shortly before (and I don’t think I’m spoiling anything here) he dies.  But the vast majority of the novel is narrated by Yunior, a character who has a tendency to pop up in Diaz’s work.  Because of the novel’s ability to skip from character to character and time to time, filling us in on the history of Oscar’s mother and grandfather in addition to Lola, the narrative nimbly jumps across national and cultural borders.

I once had the good fortune to watch Junot Diaz speak in person, and one thing that surprised me at the time was his claim that he didn’t want Oscar Wao to be an immigration narrative.  At first I didn’t understand what he meant.  After all, the characters do in fact emigrate from the Dominican Republic to the United States, so how could this not be seen as a story of immigration.  But rereading the book, it became clear that Diaz is more interested in the idea of diaspora and how cultures pool and divide when individuals are constantly mobile.  Just as the narrative consistently returns to the DR, so does Oscar and his family.

Living in the United States, Oscar becomes estranged from what is considered Dominican culture as he further immerses himself in geek culture.  While Diaz represents geek culture as American in a number of ways—Oscar first becomes obsessed with the Planet of the Apes series and later post-apocalyptic films reacting to the U.S./Russian Cold War—Oscar is also intrigued by the burgeoning anime culture coming in from the Far East, and as he becomes more interested in writing, Oscar thinks he might become the Dominican Tolkein, contributing his unique national identity to this partly transnational conglomerate known as geek culture.  For Diaz, geek culture represents the possibility of a global culture unbound by national borders.

The Brief Wondrous Life of Oscar Wao has all the makings of an instant classic without the baggage that comes with the word “masterpiece.”  Diaz’s narrator, Yunior, is linguistically nimble and has somehow managed to keep an entire universe of literary and pop culture references within his grasp.  The novel itself is a little over three hundred pages, and yet paradoxically seems absolutely endless and concludes far too soon.
Posted by Tom Birkenstock at 10/21/2013 06:37:00 PM No comments: