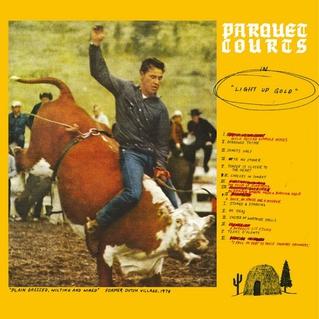 Parquet Courts are torn between the twin pulls of chaos and order.  Lead vocalist, Andrew Savage, bounces like an electron around the stable nucleus of guitar, bass and drum.  Despite the rigid tightness of their playing, the music of Parquet Courts can’t help but sound a little unhinged.  And rather than having these competing directions take away from each other, somehow they form a complimentary sound.  Parquet Courts’s debut albums, Light up Gold, showcases a band that has arrived fully formed, a band who has so clearly internalized its influences that, when filtered through an album this great, the sounds of the past immediately come out invigorated.

Light up Gold relies on Parquet Courts’s striking dynamic.  Borrowing from early Pixies and Pavement, many of the songs take on the appearance of an unfinished puzzle, allowing the listener to fill in the missing pieces.  At the same time, the band has perfected the disciplined, ironic tone of bands like Devo and Talking Heads.  You can never quite take Parquet Courts at face value.  In fact, the band excels at crafting an absurdist personality from the beginning.  On the track, “Stoned and Starving,” the Savage sings, “I was reading ingredients /
Asking myself ‘should I eat this?’ / I was so stoned and starving,” before listing off all of the possible foods he might consider ingesting.

But this slacker aesthetic belies the bands impressive musical and lyrical craft.  On “Careers in Combat,” a cousin of the Clash’s “Career Opportunities,” the band takes on the persona of a well intentioned elder, listing off jobs that no longer exists—“There are no more summer life guard jobs / There are no more art museums left to guard”—Parquet Courts manages to accomplish what their peers of all stripes have largely failed to do: address the Great Recession with wit and insight.  Parquet Courts interrogate the current generation gap, America’s crumbling infrastructure, American adventurism abroad, and the nation’s unsure future, and they manage to do so within the span of little more than a minute.  Parquet Courts brilliantly deliver their lyrics from the point of view of a concerned but condescending baby boomer, offering advice about how to survive in a wrecked economy that his generation just happened to help wreck.  And tellingly, a high percentage of the disappearing jobs listed, like park rangers and art museum guards, are in public service.  The fact that there are “still careers in combat life” paints a picture of a nation without the will to invest in itself but still eager to engage in foreign wars.

As the title of their second song, “Borrowed Thyme,” suggests, Parquet Courts are intrigued by wordplay.  In fact, they’re one of the few modern bands whose lyrics give you something to loll over in your mind.  In “A Borealis Lit Fjord,” Parquet Courts announce their love of language, singing “My girl’s a familiar looking rash / My girl’s my secret stash” before explicitly stating to the listener “You’ve been getting lots of similes.”  It’s this smart, self-conscious aspect of Parquet Courts that makes it worth returning to their music again and again.  Light up Gold is such a densely packed treasure that I doubt we’ll have a better debut album this year.  The only problem with coming out of the gates this strong is that it puts a lot of pressure on the sequel, but somehow I don’t think that’s a problem Parquet Courts need worry much about.