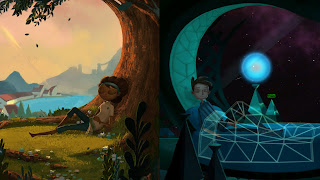 Since its announcement, Broken Age has become a talking point in how games, films, music, and other projects are financed today through crowdfunding.  At first, Broken Age appeared to showcase the incredible potential of asking fans to pony up for a project that might not have the kind of audience necessary to garner the approval of the bean counters.  Initially, Tim Schafer and his Double Fine Studios asked for $400,000 on Kickstarter in order to make their new adventure game.  They ended up pulling in nearly three and a half million dollars.  This was a massive haul, and the initial success helped establish Kickstarter as a legitimate platform for crowdfunding.  Of course, not just any video game developer could pull in seven digits through crowdfunding.  Tim Schafer’s time in the nineties knocking out stone cold classic adventure games such as the first two Monkey Island games and Day of the Tentacle likely helped.


But the studio ran into trouble when it realized that as their funding increased, so did their ambition.  Realizing that they would run out of money before finishing the game, Schafer decided to release Broken Age in two acts.  The internet did what the internet does best and started grumbling.  Unfortunately, the second act was release over a year after the appearance of the first.  And to add insult to injury, Schafer made it clear that, unlike the Telltale adventure games, Broken Age was never developed to be played in two halves and that those who have already played act one should go right back to the beginning following the release of Act 2.  For some, these delays and miscalculations have impacted their experience playing the game, but if you can put the game’s funding strategy aside and just play the damn thing, I think you’ll find a visionary experience that could have only come from the mind of Tim Schafer.


As its name implies, Broken Age is split into two halves: in one we follow Vella Tartine who lives in a fantasy world where maidens are sacrificed to monsters and people live on clouds; in the other we follow Shay Volta who lives in a spaceship where his every waking moment is monitored and controlled by the ship.  The player can switch back and forth between characters, so when a puzzle trips you up while playing Vella, you can play Shay for a while in order to give yourself some intellectual distance.  The game starts you off playing Vella, and I pretty much ran right through her entire story for the first half before shifting to Shaw.  But the second act is more difficult, and I appreciated the ability to switch between the characters.  There are also a handful of moments in the second half where it’s necessary to switch between characters in order to gather the right information in order to solve certain puzzles.  (It doesn’t go as far as the indie adventure game Resonance where switching between characters was an integral means of solving puzzles).


Vella lives in the small town of Sugar Bunting, which used to be called Steel Bunting and was once a warrior town but now has become a town of bakers.  Vella has been chosen to take part in “The Maiden’s Feast” in which a handful of select young women are offered up to a giant monster known as the Mog Chothra.  While most of Vella’s family—with the exception of her grandfather—tacitly accept the necessity of The Maiden’s Feast as a means to stave off Mog Chothra, Vella herself comes to doubt whether this ritual is the only way to save her town.


Vella begrudgingly accepts her own sacrifice until she’s finally faced with Mog Chothra himself and decides to escape near certain death.  This sends Vella on an extended quest to once and for all defeat Mog Chothra.  In order to kill Mog Chothra, Vella visits several other towns that have their own version of The Maiden’s Feast.  Perhaps the most imaginative locale in the game is Meriloft, a town nestled in the clouds and ruled by a buffoonish cult leader named Harm’ny Lightbeard.  The clouds are awash in the colors of a summer sunset while the rest of the town is composed of pastels. 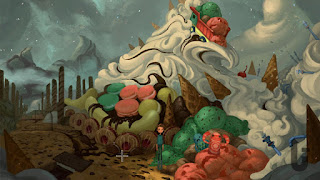 Shay’s side of the narrative has sci-fi trappings.  You begin his story by completing what at first appear to be dangerous missions on other planets, such as rescuing people from an avalanche, but you quickly discover that these are fully controlled playtime scenarios that occur on ship.  The avalanche, for instance, is made out of ice cream, and Shay must eat enough of it so that his robotic friends made out of yarn are freed.  Shay’s every waking moment is monitored by mom, an A.I. that encourages him to participate in his playtime activities, eat regular meals, and keep a regular bedtime.  However, a secret stowaway eventually punctures this numbing routine.


Both Shay and Vella’s stories share thematic connections.  They are both teenagers trapped in a world where their destiny appears to be out of their control, but they are determined to break away from cultural strictures.  It is important for the story that the two main characters are teenagers, a period in your life when you are capable or even encouraged to question and buck social bonds.  Eventually, as you might assume, the connection between Shay and Vella become less metaphorical and more real, but you could imagine a nice little game where the parallel adventures never intersect. 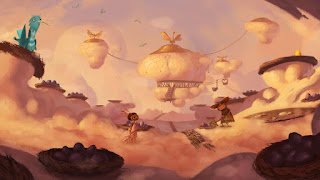 Perhaps Broken Age’s greatest strength is its unique aesthetics.  The world looks as if it is built from intricately cut construction paper.  The children’s book imagery gives the game a sense of instant nostalgia, and it’s hard to overstate how beautiful the game is.  And like a great children’s book, you could imagine pulling this game out now and again just to flip through some of the images.  There’s something tactile about the look of Broken Age, as if you could touch your computer screen and feel something other than a flat surface.  Broken Age is a kind of artisan video game, something only possible thanks to the internet’s ability to reach niche audiences.


Like Schafer’s earlier creations, the world of Broken Age is dotted with quirky tertiary characters, and the story is aided by a fine cast of voice actors, including household names like Elijah Wood, Wil Wheaton, and Jack Black.  Throughout the game you will encounter Harm’ny, a cult leader who lives on a cloud, Curtis, a hipster lumberjack, and a set of talking utensils (it kind of makes sense in the context of the game).  In fact, I enjoyed the characters so much that one criticism of the game is that I wish I could have spent more time with these people.


***Warning: Ahead there be spoilers.  I can’t really discuss the second half of the game without revealing some major twists in the story.  Since discovering each new wrinkle in the game’s world is one of the more enjoyable aspects of Broken Age, I would recommend that if you haven’t played the game, turn back now.*** 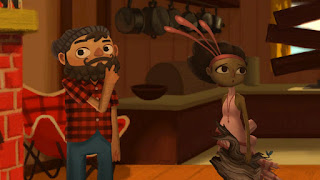 When images of Broken Age were first released, they immediately brought to mind The Longest Journey, a seminal adventure game in which the protagonists flits between a fantasy world of magic and a Blade Runner inspired megalopolis.  These two halves of the game are parallel worlds whose destiny are intertwined, even if few are conscious of this connection.  But this is not the case in Broken Age.  In fact, not only do Shaw and Vella live in the same universe, they live on the same world.


It turns out that Shay is not floating through space.  In fact, his “spaceship” happens to be the same Mog Chothra going from town to town abducting maidens, and an elaborate system has been developed in order to keep up the illusion of space travel.  Shay and his family come from beyond the Plague Dam, a giant wall separating modern cities of Shay and his people from the agrarian world of Vella and her people.  In a twist that never quite makes sense, Shay’s mother is not actually an A.I., but a flesh and blood parent who was merely using the ship’s system to watch over her son while she maintains the ship.  He also has a father, but he doesn’t appear until Act 2.


Shay and his family were actually being manipulated by the Thrush, an advanced race of beings who have genetically modified themselves.  But, in a plot point that appears to be borrowed from Dark City, the Thrush need to diversify their gene pool so they abduct young women from what they call “the badlands,” and it turns out that young children have a certain amount of purity that allows them to make the right picks.  (This was Shay’s job, but don’t worry, the Maidens aren’t dead.  They’re just locked up on the ship/Mog Chothra).


The twists on top of twists makes for a somewhat convoluted second half, but there’s something admirable about taking Plato’s “Allegory of the Cave” and doubling down on it.  In Act two, Shay and Vella switch places, so while Shay discovers Meriloft and its quirky denizens, Vella explores Shay’s damages ship.  Both Shay and Vella seem oddly at ease with this change of scenery.  Shay doesn’t seem perplexed by people living on clouds and advanced technology doesn’t seem to phase Vella.  Both are decidedly non-nonplussed.  Not addressing Shay and Vella’s unusual situation in Act 2 is something of a missed opportunity.

Broken Age’s second half doesn’t quite live up to the promise of its first, but it’s still a wonderful experience.  Because of the layers of twists, not everything gets explained.  The game repeatedly insinuates that there’s a special connection between Shay and Vella, but this is never fully spelled out.  The game also ends after the worlds of Shay and Vella are quite literally bridged, which makes me wonder how their societies will handle knowledge of each other.  The world of Broken Age is so rich with possibilities that I would love to see a sequel.  But even if we only get one Broken Age, it still stands out a unique visual and emotional experience.
Posted by Tom Birkenstock at 6/28/2015 11:27:00 AM 1 comment: