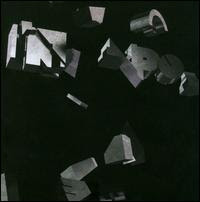 Bands use the self-titled album as a means of telling their fans that they’re going back to basics, that this album will rediscover what made the band great in the first place. That’s almost assuredly what Interpol wished to communicate by releasing a self-titled album after their critically derided Our Love to Admire. Unfortunately, despite whatever good intentions, Interpol’s latest fails to live up to the promise of their first two moody and exhilarating albums.

Interpol starts off promising with “Success,” a song built almost entirely upon their muscular rhythm section. However, by the second song, “Memory Serves,” many of the album’s reoccurring weaknesses quickly become apparent. Like much of the album, “Memory Serves,” relies too heavily on a feeble and repetitive chorus that lead singer, Paul Banks, strains to sell like he’s some sort of low level stock broker. Lyrically the album trades in the sort of over worn love loss that mistakes clichés for directness. In “Summer Well” Banks pleads, “I miss you babe / I want you back,” and as a listener I can only think to myself, “Who cares?” Interpol have never been known for their lyrical prowess, but on their first two albums you could count on them to use obtuse abstraction now and again to set the mood.

That’s not to say that Interpol doesn’t have its good moments. The orchestration on “Always Malaise” and the piano on “Try it On” point to a fuller sound that still might reinvigorate the band. Unfortunately, even the interesting sonic tricks on Interpol are buried under thick production that flattens any dynamics in their sound. These aren’t songs, they’re mosquitoes frozen in amber. The front cover of Interpol shows the band’s name in a state of deconstruction. Well, judging from their past few albums, the band should spend some more time figuring out how to tear their sound apart rather than putting it back together. 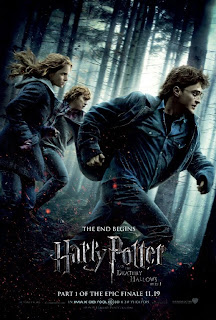 As the aggregation of six films, the first part of the final Harry Potter film, Harry Potter and the Deathly Hallows: Part 1 (whew), carries with it weighty expectations. With each installment the stakes have been raised to the point where the final film will have awfully high hurdles to clear. Besides, after making one’s way through what’s likely around fifteen hours of film already, you’re likely going to want a massive payoff. In the case of HP 7.5, it may be too early to decide whether the concluding movie delivers on the ever growing anticipation for the final conflict between good and evil, but I can confidently state that the film ingeniously ups the ante not by making Potter and his gang face off against even more powerful magicians, but by making our heroes grapple with their own interior fears, jealousies and existential nightmares.

Just as the final film in the series has been cleaved in two, we might look at HP 7.5 as a film divided. The first half takes the form of an espionage thriller, pitting Voldermort against the Order of the Phoenix. Realizing that Harry might be the only person capable of defeating Voldemort, the Order of the Phoenix creates several Harry decoys in hopes of redirecting any assassination attempts away from the real Harry. Their ruse is almost immediately discovered when several Death Eaters intercept the faux-H 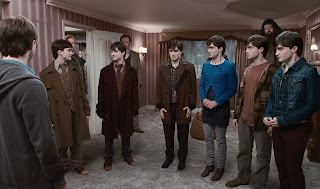 arries (and the real one) in mid-air, leading to an impressive chase scene across the London skyline and English countryside. This action sequence is perhaps only bested by Harry, Ron and Hermione’s infiltration of the Ministry of Magic, which has been recently co-opted by the Death Eaters, to retrieve a magic locket. These set pieces give the audience exactly what they want from their blockbusters: big adventure and even bigger special effects. Unlike the average blockbuster, which usually globs a bunch of CGI on the screen like a two year old with finger paints, HP 7.5’s action is carefully crafted mixture of excruciating suspense and daring deeds.

About halfway through the film, however, HP 7.5 makes a strange turn into what seems like a different film. After recovering the magic locket from the Ministry of Magic, Harry and company flee to the English countryside in order to decide how to dispose of this mystical object. The locket, we learned from the last installment, is a horcrux, or an object that houses part of Voldemort’s soul and grants him eternal life, until they’re all destroyed, that is. The horcrux locket shares many of the same qualities as the ring in Tolkein’s Lord of the Rings saga. It cannot be destroyed by except under special circumstances and brings out the worst in whoever happens to bear the locket at any given time. Naturally, the three take turns with the evil art 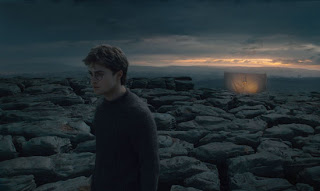 ifact, but this precaution still does not prevent the inanimate agitator from wreaking havoc on their interpersonal relationships. Ron is the first affected by the heavy burden of the locket, accusing Harry and Hermione of carrying on an illicit affair and eventually abandoning their expedition.

Of course, Ron isn’t entirely wrong in his accusations. It is difficult not to notice a simmering mutual attraction between Harry and Hermione. After Ron leaves, the two of them share a dance to a Nick Cave song (a lesser director would have brought in the overused “Hallelujah,” and still an even lesser director would have used the Rufus Wainright cover), a surprisingly tender moment that is at first difficult to read. By establishing that Ron’s insecurities are more than just paranoia, the film utilizes the locket’s magic to uncover real depth to its characters. The majority of the second half follows the characters as they attempt to discover how to destroy the horcrux, all the while moving from one gorgeous British landscape to the next. This extended camping trip seems somewhat lugubrious compared to the tightly constructed first half, and, as they stumble from one clue to the next Harry and Hermione seem at a loss as to what direction to take and where to go. This is their “Jesus in the Wilderness” moment where the characters begin to question the efficacy of what they are doing. We might also situate this stretch of the film within the innocence to experience themes that Rowlings has been working with since the first book.

If we view the Harry Potter saga as a story about a boy growing up and learning more about himself and the world as he progresses through an educational system, then, like anyone who has graduated from high school or college, we must contend with the question of what this individual will do once he is freed from the helpful constraints of schooling, where the next step forward is always placed right in front of you. Every schoolchild dreams of the freedom of adulthood, but few actually know what to do with themselves immediately after escaping the bonds of education (tellingly, Hogwarts is absent this time around). Everyone has his or her moment in the wilderness. This reading of HP 7.5 is bolstered by the strange, esoteric logic of the quest. The way that Harry and Hermione stumble from one clue to the next signifies the sometimes directionless nature of adulthood.

What’s particularly ingenious about HP 7.5 is that it overlays adult existentialist questions over what is ostensibly a “children’s film.” It is not, however, the first kid’s film of 2010 to do this. Toy Story 3 similarly grappled with questions of life’s purpose and death’s eventuality. What makes these films “dark” has nothing to do with violence or obscenities (although the trash dump in Toy Story 3 was rather frightening), but rather with their ability to imbue films made for a broad audience with themes that most of us would rather not think about on our day out with the relatives. There are other family films that are more violent and contain more sexual innuendoes, but these elements just as often make the films more juvenile as they make them more adult (filmmakers and fanboys take note). HP 7.5 and TS 3 show us that big movies are capable of tackling big questions.

HP 7.5 strides into theaters with the confidence only millions of ready made fans can muster. It decides, with great effect, to slow the plot down just when most films would be hustling to throw everything they have at the audience. It also includes a gorgeous animated sequence that incorporates fairy tales into the repertoire of Rowling’s collage of influences. If there is one thing that holds the film back, it is its role as prelude to the big finale. It is difficult for a film without an ending to fully satisfy, especially when we know that part two is just a few months away. Of course, when the credits roll on the final Harry Potter film, I reserve the right to adjust my score accordingly.