Manhood for Amateurs by Michael Chabon


Manhood for Amateurs by Michael Chabon (4/5) 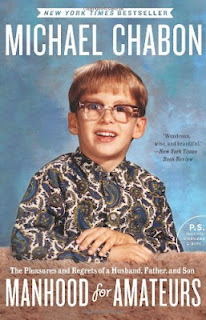 Over the course of his career, Michael Chabon has built a body of work that seems determined to prove that, paradoxically, we may engage with complicated, real-world entanglements through escapist literature.  Kavalier and Clay detailed the Jewish immigrant experience by looking at the early formation of superheroes and comic books.  The Yiddish Policeman’s Union took on questions of national identity and sovereignty while telling a noirish mystery adventure.  At this point it seems strange to see Chabon come to reality through the decidedly un-otherworldly genre of the personal essay.  Chabon’s collection of essays, Manhood for Amateurs, gives fans a glimpse into the real life obsessions that have made his novels unique imprints on the world of literature.

Anyone who has read his magnum opus Kavalier and Clay knows that Chabon is perfectly capable of writing novels of intellectual and physical weight, so it is somewhat refreshing to read this series of airy musings that might be best read during a sequence of lazy afternoons.  Chabon’s ruminations are evenly split between autobiographical exploration and pop culture inquiry.  In one of the more intimate essays, “The Heartbreak Kid,” Chabon recounts flashes of his first marriage and waxes nostalgic about his relationship with his first father-in-law.  And yet just a couple dozen pages prior, he was tracing the evolution of Legos and doing his best impression of a septuagenarian while decrying their recent glut of licensing deals.  But perhaps the best individual essays of the collection happen when the autobiographical and the cultural cross paths, like in “A Woman of Valor” where he compares his wife to the Jack Kirby superheroine Big Barda (which, if you are a DC Comics fan, is perhaps the most romantic sentiment ever uttered).

I had the good fortune to briefly talk to Michael Chabon while he signed my copy of this book.  During our brief back and forth, my wife asked him if Manhood for Amateurs was a response to his wife’s collection of essays Bad Mother (which is also excellent, by the way).  He said that he wrote Manhood as a sort of companion piece to Bad Mother.  After hearing this I couldn’t help but line up both books.  The essay genre seems like a more natural fit for Ayelet Waldman, who managed to go to some difficult places in her writing.  Wanting to limit an audience’s access to your personal life is a perfectly reasonable reaction to writing non-fiction, but it would be a lie to say that it doesn’t in some manner limit this collection.  Still, I’ve always felt that it is sometimes necessary for an author to write minor works in order to prove he is a major artist.
Posted by Tom Birkenstock at 9/24/2012 08:35:00 PM No comments:

On Pitchfork and Lists 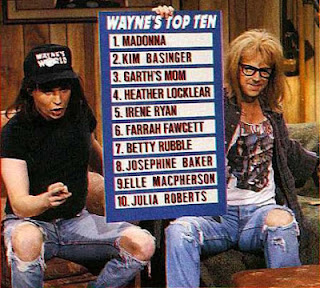 Several weeks ago Pitchfork.com, often described as the hipster Bible of music websites, put up an application that allowed you to arrange, in order of quality, the best albums of the last fifteen years, which also happens to be how long Pitchfork has been in business.  What often bothers people about Pitchfork (myself included) is the definitive way in which they present their tastes. The website does not include a comment section, presumably because it could serve as a platform to launch an attack against the aesthetic arguments of Pitchfork’s reviewers.  The lack of a comment section ensures that there will be no oppositional discourse to Pitchfork’s tastemaking.  In a world of web 2.0 where interactivity has increasingly become essential, this decision by Pitchfork appears more and more to be a deliberate strategy.  Their obsession with lists also reinforces the idea that they are engaged in a canonical enterprise with the end goal being the construction of what constitutes a “proper” understanding of popular music.  Their opinions are less arguments than they are divine truths inscribed onto a tablet and brought down from the mountain top.

So the “People’s List,” as Pitchfork called their project, at first appeared like a nice way to admit that they had placed a tyrannical emphasis on their own judgment.  It was time to give back to their readers, to let them make the tough decisions.  I personally enjoyed passing along best of lists with people I know like we were trading baseball cards.  However, problems crept up once again when Pitchfork aggregated their reader’s picks.  The end result ended up looking like something that Pitchfork, rather than its readers, would have put out.  But in hindsight this isn’t terribly surprising.  People read Pitchfork because they are interested in indie-rock music, and in return Pitchfork helps shaped the aesthetic taste of its audience.  The end result was, in a word, bland.

This caused Pitchfork critics to go into a fury.  Over at Slate they accused Pitchfork readers of being racists and claimed that the entire list was a “scandal” (I’m not making this up, folks).  Gawker’s response was, unsurprisingly, heavy on the snark.  For me, however, all of this discussion of lists reminded me of the wonderful Walter Benjamin essay, “Unpacking MyLibrary.”  In this essay, Benjamin analyzes the process of book collecting.  He notes that it is much more and much less about reading the books in one’s collection.  In one sense, Benjamin argues, book collecting is a sort of obsessive compulsive disorder, or, as he writes, “For what else is this collection but a disorder to which habit has accommodated itself to such an extent that it can appear as an order?” (60). What’s more, collecting is just as much about the corporeal aspect of the books as it is about their actual content.  Physically assembling the books in one place, regardless of whether or not you have read all of them, seems to be the main goal of the book collecting obsessive.

In this sense, collecting books is more about the collector than the books themselves.  The same can be said about the creation of best of lists.  In some sense, they’re less than the sum of their parts.  A list that attempts to collect the best films of the last twenty years, for example, tells us an awful lot about the person who created that list, but usually tells us very little about the films themselves.  This is just Benjamin’s obsessive compiler of rare book artifacts transmogrified into the digital age.  The internet is overrun with enumeration.  If you want someone to read a web article, then start typing out numbers, and, if you aren’t pressed for time, throw some paragraphs in there as well.  I mean, the website Cracked is based around the idea of creating listings that in no reasonable sense could be organized from worst to best.

But this doesn’t mean that lists are necessarily pointless.  Like I said, they tell us an awful lot about the compiler.  I enjoyed reading the various lists of favorite albums that floated around the web over the last few weeks.  They taught me a lot about the person who put these lists together.  And every once in a while they pointed out some new classics that I felt compelled to track down.  But once these lists were compiled into Pitchfork’s uber-list, they lost their individuality. They started to tell us more about the kind of music Pitchfork grants 9.2s and 9.6s to than about their readers.  These days we collect in order to create a mosaic of ourselves.  If you’re curious as to what albums I came up with, then you can see them here.  Putting it together, I think I learned a little about the last fifteen years of my life.
Posted by Tom Birkenstock at 9/10/2012 05:51:00 PM No comments: