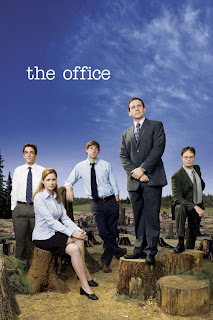 What do you do when the TV show you based on a two season British comedy continues into its fifth season? That’s the question that must be troubling the writers of The Office. The central conceit of the British Office was a look into the life sucking world of the mid-level corporate world, and while this same theme continued in the American version, some time in season four the show’s interests detoured, like Michael’s GPS directed drive into the lake, towards the soap opera lives of the characters. Sure, I liked the “will they or won’t they” storyline between Jim and Pam, and Andy’s cuckolding at the hands of Angela and Dwight was particularly entertaining, but the show has also veered dangerously close to making it look like selling paper might be a fun job.

If the show did in fact jump the proverbial shark, it may have occurred in the episode, “Job Fair,” when Jim, Andy, and Kevin go golfing with a potential client and Jim, through pluck and determination, lands himself a big sales commission. Hey, I’m watching this show so I can laugh at the soul crushing everyday minutia of corporate America, not to watch Horatio Alger climb his way to a comfortable life of sitting in the big chair chomping cigars and, to amuse himself now and then, using a factory worker as a foot rest. Even worst than Jim’s pluck, was Pam’s contrived decision to leave graphic design school early so she could return to her once hated job as secretary. What happened to the satire of season two, like when Dwight delivers a speech by Mussolini to rousing applause? What happened to those times when we watched this show because of its keen observations on post-collegiate middle class life as well as race, gender and sexual orientation in politically correct ?

It was a bit of a relief, then, when this week’s episode of The Office, “Prince Family Paper,” harkened back to those days when it was possible to laugh while realizing these characters’ day to day lives had existential crises hidden in every meaningless paper transaction. Michael is assigned to investigate a small paper supply company set up in a blind spot where Dunder-Mifflin has no offices. The plan is to either buy out the company or run it out of business and thus take over the territory. The plan is for Michael to pose as a potential client while Dwight poses as a potential hire so both can scope out the operation. The company turns out to be a small family owned business in the post-war American tradition (of course, in this case the war happens to be —when Mr. Prince tells Michael he started the company after returning from Vietnam, Michael replies that he’s heard it’s very nice over there). The Princes extend one generosity after another, from a cup of coco to fixing Michael’s broken car. Their penultimate act is to hand Michael a list of their clients as references for the quality of their service. What he first sees as merely the case of a “big shark eating a smaller shark” becomes a moral conundrum, and Michael is reluctant to hand over the client list to his bosses in . Dwight, of course, tries to convince him otherwise.

The episode is a wonderful juxtaposition of the instinctual workings of contemporary corporate against what was once seen as not only the ideal workplace but as the expected relationship between employer and employee. That is, family—metaphorically speaking if nothing else. The episode spoke to the amorality of corporations, a welcome message in an era where someone who makes minimum wage is, in part, paying for multi-billion dollar executive bonuses at a time when those very same companies are losing money. But, it also speaks to a much older principle of comedy: tragedy and comedy are the closest of genres. After all, who can laugh at someone else when a smile is already spread across his face?