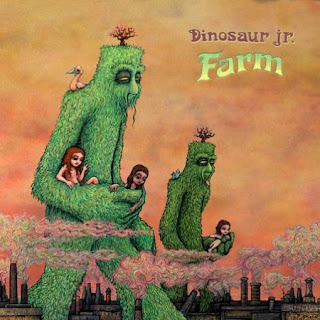 Dinosaur Jr. - Farm (5/5)
The first decade of the new millennia, often characterized by an extreme sense of nostalgia, saw the resurrection of many 80s and 90s era rock bands. While each band who came back from the bargain bin engendered reactions ranging from “I should have known” (The Smashing Pumpkins) to “I never would have thought” (The Pixies), there were a couple of groups who truly did the unthinkable and released new indie rock albums that were just as good as their old alternative rock albums. One such band, Dinosaur Jr., shocked everyone when they came together to record a new album not only because of their vitriolic breakup, but because the album in question, Beyond, wound up as one of the best albums of the year. In a turn of events that should have surprised no one, but probably shocked many, Dinosaur Jr.’s follow up, Farm, is even better than their last album.

Farm’s cover art, consisting of two Ents carrying naked children in the palms of their hands, provides a psychedelic connection from J. Mascis to the guitar rock gods of yore (c. 1970s). Some of the longer set pieces twist and turn until they invert themselves to reveal expansive guitar solos. The penultimate song, the almost nine-minute “I Don’t Want to Go There,” begins with a tempo that chugs along like an old car, but as it makes its way across different landscapes, the soaring song finally ends with a monster solo that bites off the entire second half of the running time. Mascis’s proficiency with guitar solos so sharp they could skin cats is a singular gift to be sure, but his talents can be traced back to his acknowledged inspiration, Neil Young. I must admit that, aside from Mascis’s voice, I never gave much thought to the comparison, but on Farm you can see the band growing into the profile of Young, much as a man’s bones stretch in later years to reveal his grandfather’s hidden genetic mark. In some ways Farm sounds as if Neil Young had continued to follow the punk rock inspiration he found when recording the album Rust Never Sleeps.

That’s not to say the album is devoid of the great pop songs the band has always delivered. Both “I Want You to Know” and “See You” skip along with such ease that the band makes them look easy, even if few bands write songs this enjoyable two decades into their career. “Over It” is notable for not only being one of the most radio ready songs off the album, but because the song title easily plugs into narratives about the reunion of once avowed enemies, J. Mascis and Lou Barlow. For his part, this time around Barlow’s harmonies float higher and his songs are tighter. It is this ability to balance guitar solo freak outs and pop songwriting that makes such a long album seem epic but not overblown (Arcade Fire, take note).

Like a circus daredevil who moves on to higher, more dangerous, heights, many are waiting to see when Dinosaur Jr. will fall. After two outstanding comeback albums how does a band keep on creating excitement? At this point it is probably safe to no longer see Dinosaur Jr. as a reunion band because these albums fit so well within their canon of work. There will be other great albums (and probably some not as great albums) but it is safe to say that watching this band follow its muse into the new millennium will be as rewarding and unpredictable one of Mascis’s searing solos.
Posted by Tom Birkenstock at 8/18/2009 08:46:00 PM No comments: