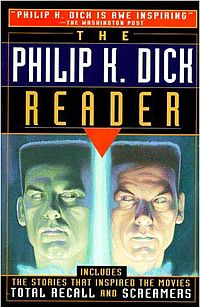 One of the great tragedies of Philip K. Dick’s life is that he died shortly before Hollywood started pumping out adaptations of his work.  This means that he has become far more popular posthumously than when he was alive.  For most of his time as a sci-fi author, Philip K. Dick both lived to write and wrote to live.  He was an incredibly prolific artist who, at times, seemed to have an unending supply of ideas, but at the same time he also had to write in order to provide himself shelter and food.  This means that PKD’s naturally productive nature was bolstered by the fact that he was also forced to produce.  While PKD turned in a number of masterpieces in his time, his writing could often be hit or miss.  This makes it difficult for fans of his writing to navigate his body of work past some of the more well known novels.  PKD’s prolific nature makes it especially tough to find a satisfactory collection of his short stories.  Out of the seemingly endless collections of PKD short stories, The Philip K. Dick Reader isn’t a bad place to start.

The one thing that The Philip K. Dick Reader has going for it that many other PKD collections don’t is the fact that it includes a number of short stories that later served as the blueprints for film adaptations.  Of the stories included in the anthology, the following have been made into movies: “The Golden Man” (Next), “We Can Remember it for You Wholesale” (Total Recall), “The Minority Report” (Minority Report), “Paycheck” (Paycheck), and “Second Variety” (Screamers).  It’s a joy just to see ways in which PKD’s vision did or did not make it onto the silver screen.  After reading some of PKD’s work, for example, it becomes apparent that the dark comedy present in Paul Verhoven’s Total Recall is akin to PKD’s similarly perverse sense of humor.

But the real gems in The Philip K. Dick Reader are those stories that surprise us with their quality, the stories that manage to contain PKD’s wit and intelligence, albeit in miniature.  One of the best finds in the anthology has to be the fantastically titled, “Foster, You’re Dead!”  Like much of PKD’s work in this collection, “Foster” is a clear response to the Cold War.  But where most of his stories are interested in what happens after the bombs hit, “Foster” presents a small town on the edge of a nuclear war.  In PKD’s vision of America’s future, the government and corporations have found a way to make war work for consumerism.  Although it is not mandated, each member of the community is expected to buy their own bomb shelter, and those who don’t become outcasts.  The Foster of the title is an adolescent whose father refuses to give in to the pressures of consumerism, despite the toll it takes on his wife and son.  “Foster” showcases PKD as a brilliant observer of power and coercion.  He understands that power over individuals and groups doesn’t always come in the form of the government.  Instead, authority can manifest itself as our next door neighbors or in the form of a commercial telling us what we must do to be acceptable in polite society.

Since most of these stories were written during the height of the Cold War, it’s not surprising how many of them take place after the fall of civilization.  But it is surprising how many variations on the post-apocalyptic narrative PKD could conjure.  In “The Turning Wheel” a devastating war has upended social order and racial hierarchy, causing the “caucs” to become the most subordinated racial caste; “The Last of the Masters” pits roving bands of anarchists against the very last organized government run by a nearly despotic robot; “To Serve the Master” presents a world where the apocalyptic past is so traumatic that it is pathologically sublimated;  and “Pay for the Printer” is a story of Marxist alienation where humanity has lost the skills necessary to produce goods and must rely on aliens to provide necessities.  It’s interesting to read PKD’s apocalyptic fiction at a time when the end of the world—thanks to an influx of zombies—appears to once again be in vogue.  But where present day stories of the end of the world are obsessed with complete and total atrophy, PKD seems more concerned with how we will carry on.  There’s a sense in his work that he believes that the world we live in—with its racial, gender, and economic inequality—is not a given, that we can transform our society for the better.  Even in his bleakest stories, PKD often betrays a sense of optimism.

Of course, not every installment in The Philip K. Dick Reader is gold.  Some of the material is just plain weird and there are a few that are kind of bad.  The story “Strange Eden” ends with a lion-like creature angrily shaking his fist at a departing spaceship, and I don’t want to even get into how PKD arrives at this scenario.  But even in PKD’s worst stories there’s a nervous energy that always propels it forward.  And his best work vacillates, often uneasily, between pulp trash and high philosophy.  His short stories can often read like thought experiments with a higher number of robots, mutants, and schizophrenics.  This tension between the high and the low is a defining aspect of PKD’s work, and instead of diluting either characteristic, the sensational somehow reinforces the high minded and vice versa.
Posted by Tom Birkenstock at 4/27/2013 06:58:00 PM No comments: