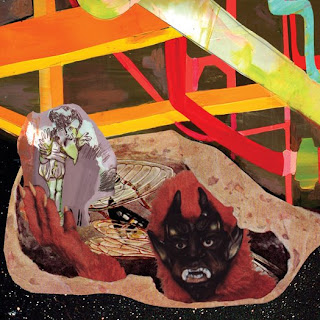 Don’t be fooled by the three year gap between Wolf Parade’s first and second album, these guys are prolific. If I’m not mistaken (and I think I am), Spencer Krug and Dan Boeckner play in ten or twelve other side bands each. This means that during those three years they have collectively written eight-hundred songs, so you’ll excuse them if Wolf Parade’s second album has only nine perfect songs instead of twelve.

Anyone who’s followed Ryan Adam’s career knows that being prolific is often more of a hindrance to an artist than a boon. Unlike Senior Adams, the principle members of Wolf Parade do not have to bear their band on a single pair of shoulders, and despite the high quality of the aforementioned side projects, there must be some kind of chemistry between the principle songwriters Krug and Boeckner that pushes both of them to the peak of their songwriting skills. Perhaps that’s even why the album is called At Mount Zoomer (actually it’s because that’s where it was recorded).

At Mount Zoomer is one of the few sophomore albums in recent years that feels like a confident couple of steps in the right direction. After listening to both albums back to back I’m convinced that the band approaches their second album with a completely different mindset than their first. The guitar is no longer required to merely produce a series of chords, and instead the vocals, keyboards and guitar all form a cyclone of melodies.

Likewise, the songs are much looser in structure. Many of the songs make their way through so many sonic landscapes that by the time you reach the end of it is easy to forget about where you began. In particular “Language” city begins as a rhythm driven march but as it continues, and the song rises with the mantra “We are not at home,” it feels more like a zephyr surrounded by swirling synths.

The inclusion of so many slower songs like “Call it a Ritual,” “Bang Your Drum,” and “Fine Young Cannibals” (a sizable sum on a nine song album) only draws attention to the band’s chest-out confidence. The conversations between the rhythm and melody segments are so deep that none of these songs feel like filler, and so confident is the band that even at excess of six minutes “Fine Young Cannibals” holds one’s interest for every intervening second.

I know what you’re thinking. Now, I’m hardly an expert regarding bands from the eighties comprised of ex-members from The English Beat, but if The Fine Young Cannibals ever, with a nod to INXS, host a reality show contest in order to replace a band member, then I think the members of Wolf Parade would give that guy with the white afro from Hot Hot Heat a run for his money. In conclusion, yes, “Fine Young Cannibals” does sound like it has some eighties influence, with synthesized horns and all, but not like an actual Fine Young Cannibals song.

The real centerpiece of the album is the six-minute epic “California Dreamer.” The propulsive drum and bass provides tension for every moment while the rest of the band ratchets up their performance. By the time the chorus of “I thought I heard you on the radio but the radio waves were like snow” kicks in, it’s damn near impossible not to join in.

When I finally get to the point where At Mount Zoomer is no longer the choice du jour on my ipod, and it gets quietly shuffled back into the mix, it’s comforting to know that there will be plenty of side projects to tide me over. Of course, even with all those side projects running around, I would prefer not to wait three more years for another Wolf Parade album. Remember Boeckner and Krug, power in numbers and all that.
Posted by Tom Birkenstock at 9/20/2008 06:12:00 PM No comments: