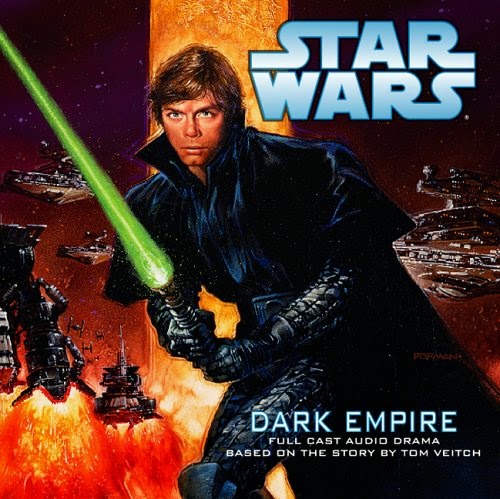 If Heir to the Empire reintroduced Star Wars to the novel format, then Dark Empire reintroduced Star Wars to comic books.  Dark Empire was a major event that ushered in the era of Dark Horse’s reign as the next guardian of Star Wars in comics.  Of course, it’s not like Star Wars hadn’t found their way into the comic book format previously.  From 1977 to 1986, Marvel comics published a Star Wars series, but the results weren’t ideal.  The Marvel iteration of Star Wars has largely been ridiculed for introducing a new main character that pretty much looked like Bugs Bunny in space.  Perhaps as a corrective for Marvel’s perceived unseriousness, Dark Horse doubled down on the dark and gritty aspects of Star Wars.  Unfortunately, the results are just as laughable as Marvel’s giant trash talking bunny.

Dark Empire I takes place after the events of Heir to the Empire. The Empire has fallen into its own civil war among different warlord factions, and in order to sew confusion, the Republic has used commandeered Star Destroyers to swoop in and further decimate Imperial forces.  As the story opens, Han and Leia are rushing in to rescue Luke who is leading troops on the ground.  But after they finally fight their way to Luke, an anomalous “Force storm” sweeps through and picks up Luke and Artoo like Dorothy and Toto in the tornado.  The Force storm is both figuratively and literally nebulous.  It’s not clear what its purpose is other than to separate Luke from his friends and to whisk him towards the series’s big bad, which also happens to be the big bad from the films: the Emperor.

Early on in the 90s extended universe, artists weren’t shy about bringing back fan favorites.  Not only does Dark Empire I resurrect the Emperor but it also showcases the return of Boba Fett.  For me the question of what to do with the Empire in the extended universe was somewhat tricky.  It would be nice if these stories fully illustrated how vast this galaxy is instead of rehashing major conflicts from the first trilogy.  There were times when the main villain was so strong that it hardly matter—Thrawn in Heir to the Empire, for instance—but resurrecting the Emperor results in a serious case of diminished returns.  The Emperor’s rebirth is attributed to, what else, clones.  But it’s a little more complicated.  Through the magic of retconning, The Emperor has always been a quasi-ghostly being who is so infused with the power of the dark side that he burns out his physical body and must replace it with a new clone body from time to time.

The Emperor has whisked Luke away in order to offer him, once again, the chance to rule the galaxy by his side.  (Presumably, the Emperor created the Force storm, but like a lot of the comic’s story, this isn’t exactly clear).  Improbably, Luke decides to agree to join the Emperor in order to defeat him from inside his organization.  This doesn’t make a lot of sense.  Luke’s plans look something like this: first, ally with the Emperor; second, become consumed by the dark side; and, finally, the Emperor is destroyed!  I think there are a couple of steps missing from this process, and I have a problem with the idea of joining the dark side being treated in the same manner as going undercover in the mob.

While Luke is playacting his own version of Donnie Brasco, the Republic is fighting off World Devastators, the next iteration in a long line of super weapons that plagued both the New Republic and unimaginative Star Wars EU fiction.  Naturally, the World Devastators, which feed on a planet’s raw material in order to produce more weapons for the Empire, are an even greater threat than the Death Star.  Declaring whatever new technology the Empire has conjured as even more dangerous than the Death Star became routine in 90s Star Wars stories, presumably an avowal made by an Imperial commander while giving his audience metal horns and being backed by a gnarly Dave Mustaine solo. 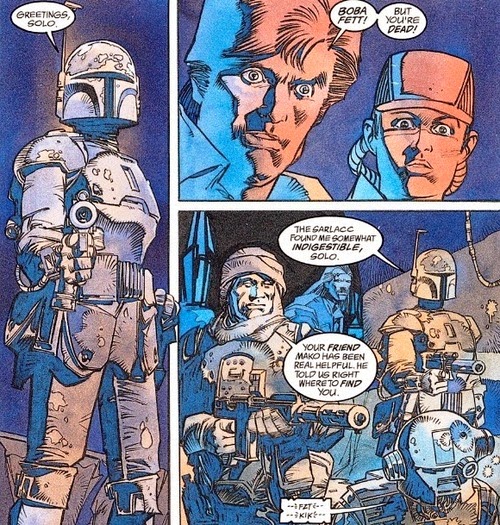 Sensing that Luke is in trouble, Leia convinces Han to mount a rescue, but instead of heading straight to Luke, the two make an inexplicable detour to Nar Shaddaa, a moon that is completely inhabited by lowlifes, bounty hunters, and other assorted criminals.  It’s not clear what Leia and Han wish to accomplish by visiting this place, but it was probably just an excuse for the writer to reintroduce Boba Fett who shows up to chase Solo and his wife.  If Boba from the films was a man of few words, coolly carrying out his mission, then the Boba of Dark Empire is his inbred cousin.  While chasing Han, Boba Fett is continually bumbling as he tries to kill his mark.  If you hated how Boba Fett died in Return of the Jedi, then you will absolutely loath what they have done to the character in this comic.  I will concede that the artwork of CamKennedy, best known for his work on Judge Dredd and 2000 A.D., really clicks during the Nar Shaddaa section of the work.  There’s something about his rough, cynical artwork that melds well with Star Wars’s underworld, even if it seems unsuited to the wide angle battles in other parts of the story. Kennedy would go on to serve as an artist on a Boba Fett series later on, and, likewise, his artwork captured the grittier aspects of Star Wars surprisingly well.

The entire narrative is pocked by those unnecessary explanatory captions where the author over explains everything that’s happening.  So the reader is presented with an image of the Republic and the Empire battling and the caption then explains that the Republic and the Empire are battling.  You would think that with the judicious use of these captions that the reasoning of Han, Luke, Leia and the rest would make sense, but you would be wrong.  The dialogue is alternatively bad and hilariously bad.  Perhaps my favorite moment in the whole series is when Leia mans the guns of the Millenium Falcon and says to herself, “Luke is right…I can feel the Force moving through me…guiding my hands in the terrible task of war!”  In fact, most of the critiques of the prequel trilogy, that the characters were thinly drawn or that the dialogue was stilted, could just as easily be leveled at Dark Empire I.

And yet, over the years Dark Empire has received a mostly positive reputation, and it’s often found on lists of best stories from the Star Wars EU.  Part of its reputation might come from the fact that, as the title suggests, it’s a rather dark story.  But it’s the kind of dark that confuses humorless cynicism with adult storytelling, the kind of “mature” narrative that most early teens are susceptible to.  Over the years a lot of those teenagers who first read Dark Empire have grown up, and if they ever revisit this series, I can’t imagine they would be anything other than disappointed.
Posted by Tom Birkenstock at 6/18/2014 08:22:00 PM No comments: