I, Jedi by Michael A Stackpole 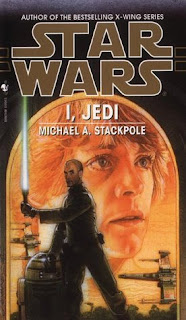 It’s not clear whether the title of Michael A. Stackpole’s Star Wars novel, I, Jedi, is an allusion to Isaac Asimov’s short story collection, I, Robot, or Robert Grave’s work of historical fiction, I, Claudius. What’s more, I’m not sure which allusion would be more pretentious on the part of Stackpole, since the novel doesn’t come close to the quality of either work.

As a preteen devouring Star Wars novels, I always liked Stackpole’s X-Wing books the best. I vaguely remember his novels as great page turners that made something new out of the Star Wars Universe. I liked that only George Lucas’s perpetual survivor, Wedge Antilles, made his way from screen to page as a major character in Stackpole’s novels. After reading I, Jedi, I’ve come to think that perhaps twelve year old me may not have had great tastes in books. Either that or I, Jedi is a massive step down from Stackpole’s X-Wing series.

I, Jedi follows Corran Horn, a Rogue Squadron pilot who also served as the de facto protagonist of the X-Wing series. Here Stackpole writes in the first person as Horn, which was the first time a character not from the films was given a first person point of view. In the earlier novels, we learned that Horn is Force sensitive, but at the start of I, Jedi he has undergone no formal training. After returning from a mission with Rogue Squadron, he learns that his wife Mirax has been captured by pirates while on an undercover mission. Instead of rushing out to save her, Horn decides that he must first join Luke Skywalker’s newly founded Jedi Academy to cultivate his nascent Force powers.

The novel is split into two halves. During the first half, Horn trains with Luke and other Force sensitives at the new Jedi Academy on Yavin 4, the planet where the Rebellion launched its attack on the Death Star in A New Hope. This inaugural class, however, is tormented by the risen spirit of Exar Kun, an evil Sith Lord whose ghost has apparently been waiting thousands of years for the right time to pounce. (This subplot made me wonder why we haven’t gotten a full on Star Wars ghost story yet. Get on it, people!)

As I read this portion of the novel, something seemed off. It was as if sections of the narrative had been carved out of the novel, like we were only getting part of the story. One of the Jedi trainees, Kyp Durron, is seduced to the darkside by Kun and steals a superweapon called the Sun Crusher or some such nonsense. But none if this is all that well developed. Even the final confrontation with the big bad, Kun, occurs off stage.

A little dip into the internet makes it clear that these events are covered in The Jedi Academy Trilogy by Kevin J. Anderson. This section of the novel appears to require some familiarity with The Jedi Academy Trilogy in order to have any real impact on the reader. If anything, I, Jedi, is exhibit A for why Disney was right in wiping out the Expanded Universe. When a reader must be intimately familiar with the larger expanded web of Star Wars novels in order for the story to be satisfying, the author just hasn’t done his or her job. Sure, the idea of covering the same territory as another novel from a unique perspective has potential, but the execution is way off.

The second half of I, Jedi is more engaging. Horn goes undercover with the space pirates who have taken his wife and must infiltrate their ranks. It’s a well worn narrative, but it’s fun to see it applied to the world of Star Wars. The first half of the novel does deflate some of the story’s urgency. Why doesn’t Horn run out to rescue his wife the moment he finds that she’s missing? And it doesn’t seem like his time at the academy was all that well spent. Horn ultimately finds his Jedi training unsatisfying and gives Luke a kind of douchey speech about how he’s had tougher training before and he doesn’t really need the weak sauce that Luke is serving. It’s largely self-aggrandizing and makes Luke, who should be the galaxy’s preeminent expert in the Force, look like a fool.

In general, I found Horn to be an unlikeable character. There’s one aspect of the character that conspicuously pops up again and again: his goatee. The man is always thinking about his goatee. He’s stroking his goatee or dying his goatee or finding some way to insert his goatee into the story. The man is obsessed with his own facial hair. This does lead to one of my favorite lines in the book: “I laced my fingers together and pressed the index fingers against my moustache” (306). I don’t think I have ever read of a more seductive dance between digits and facial hair.

The obsession Stackpole has with Horn’s goatee seemed a bit odd. Sure, it might just date the novel to the 90s when this sort of outlandish facial hair was marginally more acceptable. But I had a feeling that Horn’s goatee signified something deeper. I googled Michael Stackpole and found his picture, and sure enough, there it was: a stupid-looking goatee clutching the author’s mouth and chin.

There’s a distinct Mary Sue quality to Horn, which is only aggravated by the novel’s first person point of view. For those who don’t know, a Mary Sue is a term for a character who is amazing at just about everything and is often the surrogate for the author. The most obvious example is Wesley Crusher from Star Trek: The Next Generation. Despite feigning difficulties here and there, in this novel Horn is just the best. He defeats Luke Skywalker in a duel and then lectures the Jedi Master on what he’s not doing right at his academy. Later, he’s so irresistible that the female leader of the space pirates tries to seduce him. But, you know Horn. He’s a standup guy, and, besides, he’s married. Also, he has killer facial hair.

After spending over five hundred pages with this guy, I couldn’t wait to get away. The novel also made me think that Disney made the right choice. When it comes to the Expanded Universe, maybe they were right after all to burn it to the ground and let something else grow in its place. 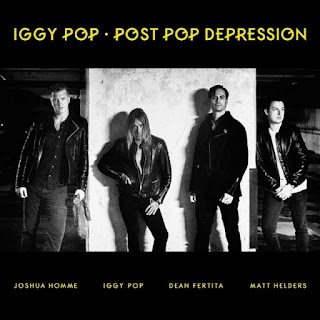 2016’s string of unexpected celebrity deaths has forced myself as well as much of America to think about our mortality, normally something most in this country studiously avoid. But because death is the only inevitability shared by all of humanity regardless of nationality, race, religion, and class, it’s a topic ripe for artists. From Cicero’s dictum that “to study philosophy is...to prepare one’s self to die” to Western art’s obsession with the pieta to Joan Didion’s Year of Magical Thinking, the topic of death seems to cut straight through time and circumstance. With this in mind, Iggy Pop’s latest, and perhaps last, album spends much of its nine songs staring into the unknowable while fighting his own obsolescence.

Pop’s career has always been interesting, even if it has been uneven. Sure, his work with the Stooges and David Bowie catapulted him into the pantheon of rock and roll gods, but his later work has been less certain. His recent (partly) French language cover album was an intriguing turn, but the less said about the Stooges reunion, the better. Pop’s always benefited from strong collaborators who can properly channel his creative impulses, which Pop himself seems to be aware of since he drafted Queens of the Stone Age’s Josh Homme as his writing partner for his latest. The result on Post Pop Depression are nine dark and nimble songs that rank with some of Pop’s best.

Post Pop Depression doesn’t sound like a tired play for relevance like Pop’s unfortunately early aughts alliance with Sum 41. Instead, it’s a serious work unbound by musical trends. As someone staring down his seventies, the end is clearly on Pop’s mind. As a xylophone traipse over a rumbling bass on “American Valhalla,” he sings, “I’ve shot my gun / I’ve used my knife / It hasn’t been an easy life / I’m hoping for American Valhalla.” The conflation of sex and violence are a longtime career obsession, perhaps a version of Freud’s death drive. And of course Pop’s aggressive, violent live performances always seem like the work of a man aching for self destruction. Sex itself has long been associated with death, either as a means to avoid thinking about the big sleep or a means of seeking the end--la petite mort. At the very end of “American Valhalla,” Pop intones, “I’ve nothing but my name,” as the music drops out completely. This moment eerily foreshadows a time when Pop will have left us with his ghostly legacy.

There’s a larger reason why Pop is unleashing his inner dirty old man on an album that purposefully looks towards oblivion. Sex also reminds us that we are bags of meat--the soft machine as William S. Burroughs once wrote. “Gardenia” seems to borrow its themes from Matthew Arnold’s “Dover Beach,” a nineteenth century lyric poem that appears to recall the night of Arnold’s honeymoon. But where Arnold’s narrator reflects on the ebb and flow of the water along the English shore of the channel to his new bride, Pop finds himself in a cheap hotel with a woman wearing a “Cheap purple baby doll dress.” The transformation of the muse and location speaks to Pop’s instinct to marry classic poetry with the skeezier landscapes of industrial Detroit.


At the close of the album’s final song, “Paraguay,” Pop begins to rant about technology, information, and those damn kids. He has transformed into full on “get off my lawn” mode. This diatribe questions whether technology has really helped us all that much. We can carry around a computer in our pocket, but in our lifetime we’ve seen a gradual disintegration of the middle class and ballooning wealth inequality. And as Pop points out, the same technology that we carry around with us can also be used to invade our privacy.  And yet the rant doubles as a representation of Pop’s fear of obsolescence. Where does he fit within this new world and will anyone remember him when he’s gone? I don’t think Iggy Pop has anything to worry about, especially if he can still produce an album this strong. He claims that Post Pop Depression will be the end of his recording career, but I hope that’s not the case. Judging by the album, it sounds like there’s still plenty of gas left in the tank.