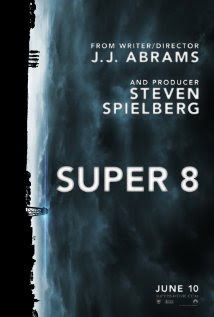 Super 8 is a love story. No, not a love story between the characters (sure, there’s a little bit of that kissy stuff), but a love story between director J.J. Abrams and Stephen Spielberg. It is obvious from Abrams’s films that, like plenty of children who grew up in 70s and 80s, he was raised on the work of Spielberg and Lucas. In fact, his Star Trek preboot arguably has more in common with the work of Lucas and Spielberg than with the original series. Fashioning himself as something of a protégé, Abrams has created a wonderful little homage to his mentor.

The film opens with the off screen death of Joe Lamb’s mother who worked at the local steel mill. Both Joe and his father, Jackson, a deputy in the local police department, must deal with the emotional trauma that naturally comes from losing a loved one. At the same time, the death also strains the relationship between Joe and Jackson. Jackson just doesn’t seem to know how to raise his son without his wife around, and he wants to ship him off to a baseball camp for the summer in the hopes that it will give him some space and stifle Joe’s interest in filmmaking. Joe has been serving as the special effects and make-up artist on his friends’ movie about, what else, zombies.

The kids’ zombie movie is arguably the most important aspect of Super 8. The gang’s film represents the transformation of their playacting into an art form, a transition from childhood into adulthood that still manages to bridge these two conditions. The film further embodies the split between the world of adults and children. In many of Spielberg’s early films, especially E.T., the difference between how children and adults see the world is represented in esoteric knowledge. The fact that the wonderful and strange actually exists can only first be perceived by an innocent youth. But it is also by making this film that the boys come into contact with the fairer sex. The director, Charles, has managed to get a girl, Alice, to agree to play the part of the hero’s wife. Joe happens to have an unrequited crush on Alice, and later in the film he gets to play the daring hero to her damsel in distress when Alice is in danger.

Oh, and there’s also a giant space alien in the film that’s trying to get off this planet while wreaking havoc on the towns folk. The alien arrives in town by way of a derailed freight train. The only witnesses to the train disaster are Joe and his gang who have set up next to the tracks in hopes of incorporating the train into their film so that it will lend it some verisimilitude. The train derailment and the gang’s escape is one of the finer set pieces of the film, and it is somewhat reminiscent of the plane crash in what is arguably Abrams’s finest directorial effort, the pilot to the TV show Lost. In all, the alien seems like something of an afterthought. While Abrams does a commendable job of laying down some carefully constructed chaos, the alien himself seems somewhat perfunctory. Unlike in E.T. (a movie that I cannot help comparing Super 8 to, even if a little unfairly), where E.T. served as a companion to a child of a single parent household who struggled to connect to other children of his own age, Super 8’s monster seems like generic threat #5, seemingly picked out of a hat at random. The alien 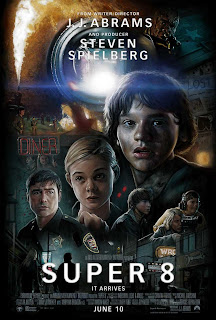 menace and the drama of loss and adulthood never come together fully. And while it is often enjoyable watching people escape or be eaten by the monster, I couldn’t help but want to get back to the gang making their movie.

But as homage the film does plenty right. In the 80s Spielberg placed films he produced and directed in small town suburbia, often in the Pacific Northwest. Likewise, Abrams’s Super 8 takes place in a small town in Southwest Ohio. We can tell the movie takes place in the late seventies because the local steel mill has yet to close down. I also grew up in a small Ohio town, and while we didn’t have a steel mill (maple syrup was a large part of the local economy), the setting did make me a little wistful for small town life. One of the great messages that come out of Spielberg’s early work as a director and producer, whether it is E.T. or Goonies, is that you need not leave your town to look for adventure. The unusual, the exciting can be uncovered in your neighbors yard, the boarded up house down the street, or the local patch of woods. The paradoxically infinite confines of suburbia were so full of excitement that leaving that world seemed unnecessary.

And in this sense, Abrams does a fine job of mimicking Spielberg. He may not have all of the details right, but he has done his homework, and the result is an entertaining summer blockbuster. In a world full of sequels and prequels, we need more movies like Super 8. Abrams may fall into the cliché of the prodigy piano player carefully reconstructing a classic; he can play the notes but he misses the soul of the music. But then again, the music was pretty great to begin with. 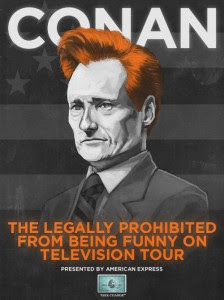 In the second late night wars of 2010 it was easy to side with Conan O’Brien over Jay Leno. Conan was the upstart, the underdog, who pushed his craft in order to create a unique brand of humor that owed plenty to early Saturday Night Live as well as David Letterman, but still refused to be shackled by his influences. He was also, unlike Jay Leno, funny. If you have choice between a comedian who makes you laugh and one who doesn’t, then it’s not much of a choice is it? So the documentary, Conan O’Brien Can’t Stop, which follows Conan on the live tour he assembled following his departure from NBC, has plenty of material to work with. The movie should have been an easy win. And yet, the documentary ends up being an unfocused piece of work that can’t pick a single narrative strain to follow, or even to competently present the few moments of insight it manages to stumble across.

For some it might be a little shocking to see Conan O’Brien outside of his “Conan O’Brien” persona. Any performer on stage or screen is acting, even if that actor happens to be playing his or herself. Conan has fashioned a great character over the years. He plays himself as an anxious bundle of nerves who is at times naïve, geeky, lascivious, and flummoxed. Certainly the “real” Conan is in there somewhere, but when we tune in every night we’re watching a performance, not the Conan O’Brien who sits on his couch to kill a Sunday morning. But in Conan O’Brien Can’t Stop, the person behind the persona can be funny, kind, cutting, vain, and somewhat bitchy. If the only version of Conan you want in your mind is the one who shows up on weeknights to tell jokes, then I would recommend skipping this film altogether. I’m sure plenty of people don’t need to watch Conan O’Brien complain that his assistant fetched him food with too much butter, because he is, after all, watching his weight.

But for those who don’t mind seeing the man behind the curtain, the film has some passing moments of insight, even if they mostly go unfulfilled. At one point Conan explains that he has a habit of telling “jokes” to his staff that are in actuality critiques of their work. There’s an unspoken bargain struck between Conan and those working for him where he undercuts his complaints with humor but they understand that he does in fact want them to step up their game. These tense exchanges make sense. After all, Conan and his writers have been responsible for putting on a show five times a night for most of the year. That sort of output requires discipline, and you cannot fault Conan for applying pressure on his writers and himself. But even if we receive a few insights into Conan’s process, the film never follows up on it. He is never asked who his major influences are, how he came to comedy, how performing late night differs from writing for others.

This complete lack of curiosity on the part of the filmmakers makes some sense, since the film is following Conan on his The Legally Prohibited from Being Funny on Television Tour. Besides, Conan’s actual life seems rather run of the mill, a fact he plays on during his tour by telling his life story in the form of a Southern Blues song of hardship and pain before finally admitting to the audience that he was born to well to do parents in the affluent Boston suburb of Brookline. But the tour winds up being little more than an afterthought. The movie is less about Conan the artist than it is about this specific moment in Conan’s life. For some reason the filmmakers felt that whatever is going on back stage was much more interesting than the pyrotechnics on stage, a tragic decision. There are several moments where we get to see Conan interact with guest stars who have joined him on stage in several cities, such as John Stewart, Stephen Colbert, and Jim Carrey. But we don’t actually get to see Conan perform with these people. It’s as if the director thought to himself, sure, I could show a clip of Conan and Jim Carrey singing a duet, but the audience probably just wants to see the two of them complimenting each other backstage.

And this is the most frustrating aspect of Conan O’Brien Can’t Stop. We spend maybe twenty percent of the film watching footage from the tour (which is, admittedly, really funny) and about eighty percent of the film watching Conan and his entourage snap at each other as the pressures of constant touring increasingly weigh on them. The movie at times resembles a concert film, but with the percentage of music to interview is completely flipped. In another, fairer, universe, Conan O’Brien Can’t Stop is the comedy equivalent of The Last Waltz, but here in our dull little world it’s nothing more than a missed opportunity.