Any Seussian fan can tell you the name of this website was taken from more than one of the good doctor's stories, and you could probably tell me the answer to the question. I'm a big Seuss fan and have been since before I could read, and that's why I was excited at my recent epiphany, even though no one I knew cared very much. After looking at a picture of Wilford Brimley it becomes painfully evident that he was the inspiration for the Lorax. He's the spitting-fuckin'-image. Don't take my word for it, look out below! 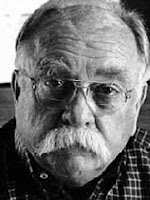 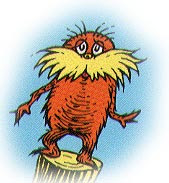 You can’t see the Brim-fler
Behind his moustache
But if you are kind and pleasantly ask
He just might tell you
A story you won’t want to miss
About his new system
And how to check your diabetis.
Posted by Tom Birkenstock at 5/31/2007 02:19:00 PM No comments:

What Is the What by Dave Eggers 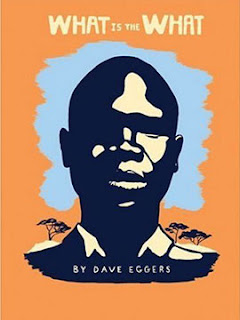 What is the What by Dave Eggers (5/5)
I knew something was afoot when I read “Up the Mountain Coming Down Slowly.” Where was the self aware ego, the fictional non-fiction (with notes), the inner dialogue masked as a conversation between corporeal persons? Instead of his usual tricks I found a semi-allegorical story concerning western imperialism in third world countries. Didn’t this guy try to get on the Real World? Eggers transformation from post-modern slacker to politically minded provocateur is complete and out of his chrysalis has sprung one of the best novels I’ve read in years.

It’s not an easy trick to make one’s way from self serving aggrandizer (even if one is admits he’s a self serving aggrandizer) to someone with a political message, especially if that political message is about the plight of a group you don’t happen to belong to. If handled incorrectly the author risks presenting his work as no more than a cultural furlough so that he may play native for awhile. There are several reasons that explain why Eggers does not fall into this trap.

First, the novel is semi-biographical. It is based on the life story of Egger’s friend Valentino Achak Deng. In fact, the entire title reads What Is the What: The Autobiography of Valentino Achack Deng and, curiously, underneath reads “a novel.” To avoid a long, and inevitably supplemented, introduction detailing the difference between what happens in the book and what actually happened, Eggers decided to term his work a novel despite its origins in real life. Eggers goes so far as to write the novel in first person and overhauls his style to approximate Valentino’s speech. If he were a lesser novelist Egger’s writing would reek of cultural poaching, but by the second paragraph I forgot it was Eggers writing the novel and not Valentino. Like a great actor he manages to hide himself behind the prose.

Second, Eggers makes it very clear his purpose is to motivate people. The novel begins with Valentino being robbed and subsequently kidnapped. The robbers leave a young child, presumably their kid, to watch over a bound Valentino. We learn of Valentino’s life in Sudan as he pretends to address his captor. Throughout the novel this same technique is repeated as Valentino imagines himself telling a hospital worker or a gym attendant his story. The reader is made aware that Sudan’s atrocities do not just occur to people thousands of miles away but also to those we pass everyday in the street. It also mirrors the fact that these atrocities have occurred for decades while the rest of the world remains ignorant. Eggers also makes good use of a schoolteacher character who leads a band of lost boys across the country. The schoolteacher attempts to explain to the boys why they are running from their homes and into Ethiopia, and by educating them he is, of course, also educating the reader. I am reminded of when Robert Jordan, in For Whom the Bell Tolls, attempts to explain land reform by likening it to the Land Rush in the United States, but of course his real purpose is to make socialism seem less scary to an American audience.

What Is the What is a novel with a clear purpose and isn’t the worst for it. In fact, it’s much better for it. What really holds the whole thing together is Egger’s superb writing. The “flashback” segments are used to great effect and the time we spend in the present only creates more suspense as we want to uncover what happened to Valentino in his homeland. The details regarding how computer packages dropped from plans land differently than other packages struck as particularly impressive. This kind of detail does not read like it was written by someone who wasn’t even there. Of course, much of the credit goes to Valentino who relayed his story to Eggers. What Is the What is that rare work of art that immediately touches the world beyond the page.
Posted by Tom Birkenstock at 5/17/2007 06:27:00 PM No comments: