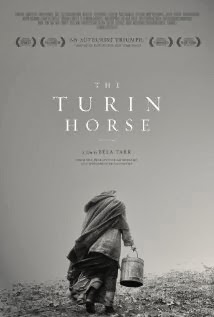 In the grand tradition of some great action adventure films, Bela Tarr’s film The Turin Horse, opens with Friedrich Nietzsche.  A narrator relates the story of Nietzsche encountering a man in Turin, Italy whipping his horse because it refused to move, forcing Nietzsche to step in and protect the horse by placing his body in between the animal and the whip.  The event involving the horse in Turin apparently led to Nietzsche’s mental and emotional break.  But, as the film notes, no one knows what happened to the horse.  The first scene of the film, then, follows a similar horse and driver as they make their way home to a weathered barn and adjacent home.  It’s not clear whether this is supposed to be the exact same horse and driver Nietzsche encountered in Turin, and even though it appears the film takes place at the end of the 19th century, it does not look like the film is set in Italy.  Even if the man and his horse do not serve as a literal link to Nietzsche and the events in Turin, they serve a clear thematic connection.

With the exception of a neighbor who doubles as a prophet of the apocalypse and a band of gypsies we see through the home’s windows, the film follows only three characters, a man, his daughter and their horse.  The movie boldly refuses to offer up even a semblance of a plot.  The anti-plot unfolds over the course of six days, and in that time the viewer follows the father and daughter closely as they go about their daily business fetching water from the well, eating potatoes and getting dressed and undressed.  The horse, either because it is old and dying or because of some hidden existential malaise that seems to also permeate every frame of the film, refuses to eat and can barely serve its purpose as a porter.

Tarr appears interested in marking time.  As mentioned, the movie is divided into six days, and we follow the man and his daughter as they engage in a number of menial tasks.  At the start of each day, the daughter walks to the well, fills up several buckets, and returns to the home.  This daily event is filmed in a single shot, so we see every action.  We also watch as the two characters sit down and eat potatoes for dinner every night.  By filling up the film’s two and a half hour screen time with the minutia of repetitive work, Tarr seems to be asking us to examine the monotony of living.  The labor necessary to even stay alive occupies these characters world to the exclusion of nearly everything else.  With the exception of a scene where we witness the daughter reading from some sort of book, these characters spend their time being busy dying.  Their lives are labor.

The kinds of labor these characters engage in are related to their material conditions.  They must feed and clothe themselves.  There is no transcendence in this kind of work.  It is quotidian, necessary and ultimately pointless beyond mere existence.  The characters appear to have no internal lives, their conversations never extending beyond the immediate here and now.  Strangely, the stoic horse is the only character who projects some sense of understanding of these larger truths.  He is the one who refuses to eat, who refuses to go on.  And if this is merely an audience projection onto an unthinking animal, then this only further emphasizes the impossibility of making meaning in this world. 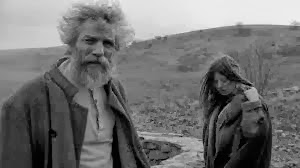 Some might wonder how it’s possible to spend time with these characters in the small space opened by Tarr.  But despite the film’s bleak tone, there’s something inviting about Tarr’s stark and gorgeous black and white imagery.  The little home is constantly surrounded by leaves and dirt kicked up by an unending windstorm, an appropriate visual approximation of the director’s bleak worldview.  Likewise, the intermittent score by MihalyVig is beautiful while maintaining an underlying sense of dread.  (Although, I would be curious to see what someone could do with Tarr’s images and music by the Seattle post-rock band, Earth, since they seem to be artistic cousins.  Make it happen, internet!).  While the film can be obtuse, especially towards the end, Tarr pulls the viewer into his world.  And it’s because he marries the beauty of everyday images with large existential questions that if you give yourself over to it, the film will stay with you long after it the final fade to black. 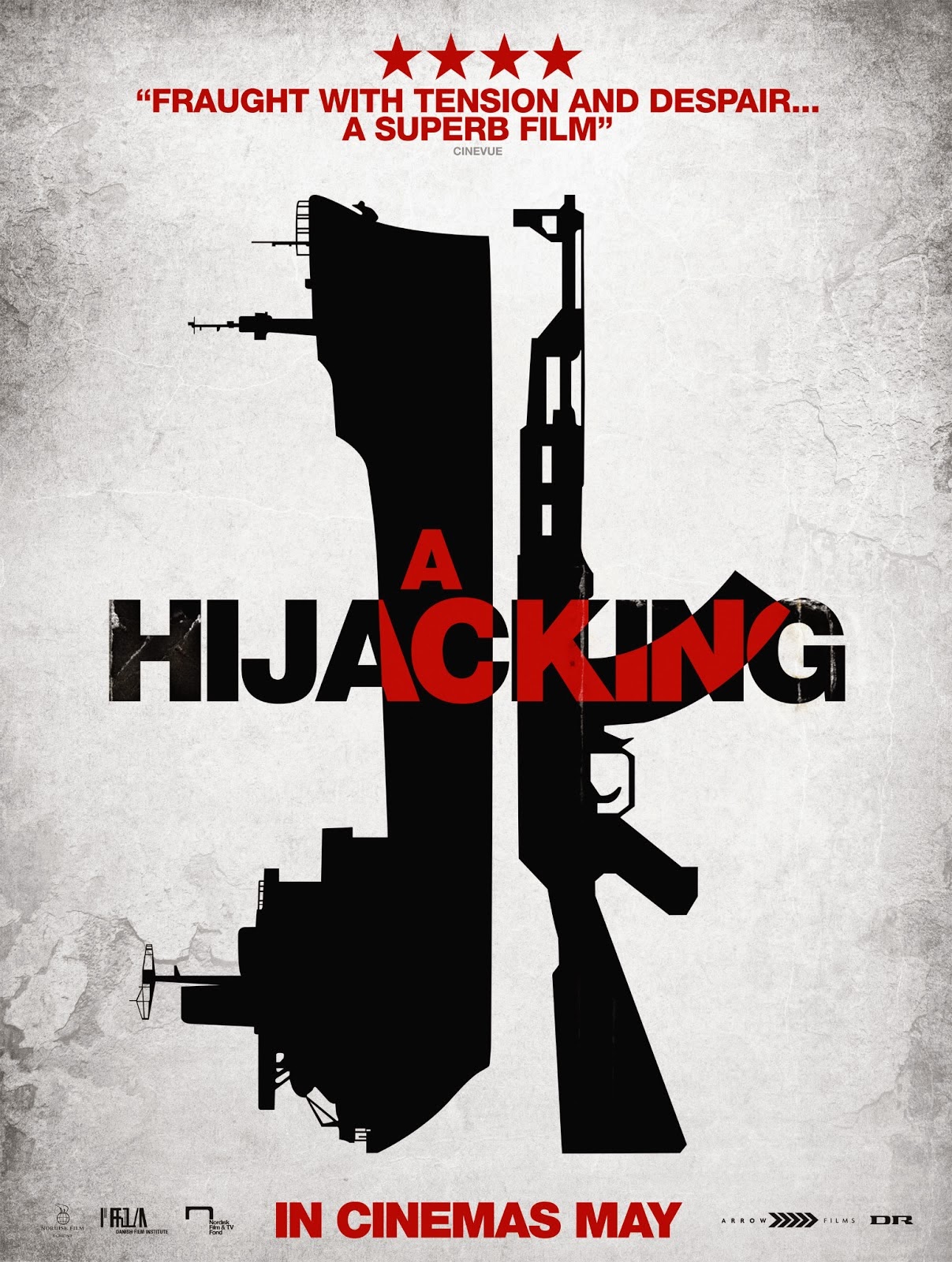 It’s an odd coincidence that two films about Somali pirates were released last year.  While all the public attention and critical praise has flowed towards the Tom Hanks vehicle, Captain Phillips, the Danish film, A Hijacking, is arguably much more of an artistic triumph.   If you were to watch these films back to back, it would be easy to see why Phillips has garnered so much attention: it is flashier, has bigger stars, and celebrates the triumph of American military force.  By contrast, A Hijacking is a much more subdued, but no less suspenseful, affair.  Where Captain Phillips is about ordinary people thrust into extraordinary circumstances, A Hijacking is about extraordinary circumstances fitted into ordinary business practices.

The narrative of A Hijacking is split between the men on the boat and the men from the boardroom. On the boat we mostly follow the ship’s cook who we are introduced to in the first scene as he tells his wife that he will be out to sea longer than expected and will miss his daughter’s birthday.  Although his name is listed as Mikkel, most people, even those trying to negotiate his release, mostly just refer to him as the cook.  While the cook and the crew strategize about how they might survive this ordeal, there aren’t any last minute heroics.  At best, the cook and a colleague attempt to befriend a particularly unstable pirate with the hopes that this will make it less likely he will execute them; at worst, the cook’s desperation to get home to his family is used as a bargaining tool by the Somali negotiator, Omar.

But the film is just as interested in how the Danish company who owns the boat handles the hijacking.  While the hijacking isn’t an everyday occurrence, events like this are apparently common enough for the company to call in an expert in negotiating with Somali pirates.  The negotiation expert recommends that the company brings in one of his men to engage directly with the pirates, but the suit in charge, Peter, decides that he wants to handle the negotiations himself.  Early on we see Peter play hardball with several Japanese businessmen, so we know he is competent, and he is coached through the process by the negotiation expert, but the audience knows that Peter’s decision is part hubris.  In a sense, he’s like a much more competent, much less coked up version of Ellis from Die Hard.

As explained early on, these negotiations can stretch on nearly interminably.  And the film does a good job of illustrating how time wears down all of those involved.  In this instance, the hostage negotiation lasts for months. And while early on Peter expertly deals with the pirates in the manner he has been coached, eventually the day in, day out pressure of the situation begins to erode his cool, Danish exterior.  It was also interesting to see the negotiation expert explain certain tactics.  For instance, Peter cannot immediately give in to the Somali’s initial demands, not necessarily because it will be too costly, but because once the pirates know the company is willing to shell out some big bucks, they will find a way to draw out the negotiation longer and ask for more.

As the article “A” in the title suggests, this particular hijacking is often treated as the cost of doing business.  It’s unusual, but not unexpected.  One of the more interesting characters in the film is Omar, who speaks English and negotiates on behalf of the Somali pirates, although he takes umbrage when Peter suggests that Omar is himself a pirate.  Throughout the negotiating process, both Omar and Peter attempt to maintain a cordial relationship, although it naturally breaks down over time.  It’s easy to view this film as the clashing of two cultures within a global marketplace.  They’re making a business deal, but it just so happens that one party has brought weapons to the negotiating table.

A Hijacking makes a fascinating comparison to the style of Paul Greengrass, the director of Captain Phillips.  Both films take on a cinema verite, documentary aesthetic.  But where Greengrass prefers to haphazardly throw his cameras about to mimic the intensity of the situation, A Hijacking director, Tobias Lindholm, uses his cameras in a manner similar to an actual documentary.  In other words, he uses handhelds, but he does not purposefully engage in frenetic jostling.  Greengrass uses the veneer of a documentary in order to reveal the subjective state of the characters in the film, but Lindholm seems interested in maintaining a calm distance from the procedures.  Arguably, this less frantic take provides the film with a more grounded feeling.

Beyond the individual narrative of Captain Philips, stories of Somali pirates are fascinating because they’re examples of desperate people from a failed state using what seems like anachronistic tactics to force their way into streams of global capital.  Perhaps better than the Hollywood blockbuster version of this story, A Hijacking illustrates ways in which men are trapped within a world and economy they have no real control over.  It’s eerie to hear Peter negotiate over numbers when men’s lives are on the line.  It’s an unsettling reminder that within this system the value of our lives can be reduced to a number written on a marker board in a conference room.
Posted by Tom Birkenstock at 2/02/2014 11:36:00 AM No comments: