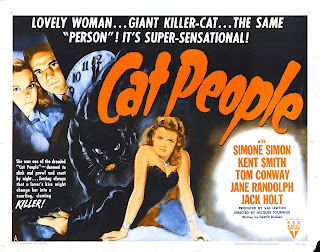 Cat People begins like a traditional romance with a couple that meets cute at a local zoo. Having trouble sketching the likeness of a black panther, Irena keeps on throwing away her unsatisfactory attempts but each time misses the trash can. Another zoogoer, Oliver Reed. disposes of her trash and jokingly chastises her. But after they strike up a conversation, this Oliver fellow seems less concerned that one of Irena’s sketches, a badass image of a panther skewered on a sword, has slipped from her sketchbook and is left to muss up the city zoo. (This is before the EPA existed, so I guess people were a little looser about these things). Because we know this is a horror film, we also know that this relationship may not end well, and Cat People could be categorized as a horror-romance in the tradition of early gothic novels, The Mysteries of Udolpho, Wuthering Heights, and Jane Eyre, or later horror films like The Fly or Let the Right One In.


Irena and Oliver strike up a romance and eventually get married. It’s not clear how long they were dating before marriage, but in the film it goes by quickly. It doesn’t seem as if Oliver knows much about his bride before marriage, except that she’s has a deep connection to her Serbian roots. In her apartment there’s a statue of “King John” regally atop a horse with his sword held straight up impaling a large cat-like creature. This isn’t Magna Carta King John, as Oliver first guesses; it’s actually Jovan Nenad, a sixteenth-century Serbian military commander who established the last independent Serbian state prior to the takeover by the Ottoman Empire. According to Irena, her village was captured by the Mamluk people, and soon after, the villagers started practicing witchcraft, which gave them the ability to turn into cat creatures. King John retook the village and killed those cat people who didn’t flee into the neighboring wilderness. 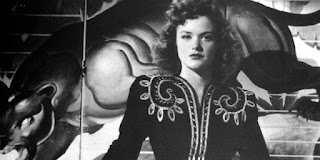 Although my knowledge of Eastern European history is hardly encyclopedic, you can probably guess from the description Irena gives us that the King John was a Christian who drove out the Muslim Mamluks. (In fact, the Mamluks were a slave warrior caste that likely inspired George RR Martin’s The Unsullied). Like plenty of horror stories, Cat People is about fear of contamination. Irena symbolizes the immigrant to the United States who may not be as white and Christian as you think. The mismatch between Irena and her husband is further highlighted by Oliver Reed’s absurdly Anglo sounding name.


Over time, Irena comes to fear that she herself is contaminated and may be one of the cat people. Another Serbian woman who bares a striking resemblance to a cat approaches Irena during her engagement dinner and speaks to her in her native tongue, calling her “sister.” According to legend, if a cat person kisses someone, she will transform into a cat and eat her mate. Cat People was made after the implementation of the Motion Picture Production Code, which established strict censorship over Hollywood cinema, so the film can’t say this in so many words, but for the audience it’s pretty clear what kissing means in this context. In fact, Oliver even says something along the lines of, “You know, it’s kind of weird we’re married and all and we haven’t ‘kissed’ yet.”


Here it becomes clear the film also embodies the fear of female sexuality as well as racial difference. Even after he marries Irena, Oliver keeps up a flirtatious friendship with his coworker, Alice Moore, who expresses doubt early on about the viability of Oliver’s marriage. Like early film star and sex symbol, Rudolph Valentino, Irena’s appeal comes from her darker complexion, which marks her as distinct from her blonde rival Alice. (Although he was Italian, Valentino also played Muslims, such as the title character in The Son of the Sheik). When Oliver, Irena, and Alice go on a museum trip, Alice should feel like the third wheel, but in fact Oliver suggests Irena explore other parts of the building because unlike him and Alice, she must be bored with these English ship models they’re looking at. The implication, of course, is that Irena is racially, religiously, and culturally unsuited for Oliver.


Irena starts to become concerned that Oliver and Alice are having an affair, and at first it appears that the film is setting up Irena to be a paranoiac. When Oliver’s having a late night at the office, she tracks down her husband only to find him having a meal with Alice. She later stalks Alice late at night down starkly lit streets. This scene in particular is masterfully crafted, juxtaposing the sound of Irena and Alice’s increasingly frantic footsteps and ratcheting up tension until it is broken by the sound of a bus arriving at its stop. Anyone who has watched a horror film is familiar with the scene where we expect the killer to jump out of the shadows, but instead a friendly character or a cat jumps out instead. The technique apparently dates back to Cat People and is known as the Lewton Bus after producer Val Lewton. There’s also a scene where Alice jumps into a pool in order to escape from a large cat she’s convinced is stalking her, and I’m pretty certain this moment in the film inspired a similar scene in the indie horror film It Follows.


But Irena isn’t as crazy as she’s initially made out to be. In fact, Oliver is planning to leave his wife for Alice, and even gets the advice to annul the marriage, which is another indicator that the marriage was never consummated. In all honesty, Oliver is kind of a dick. I mean, dude, you married this woman who you barely knew and then won’t step up when she’s clearly having a difficult time. What’s more, you’re ready to jump ship now that times are tough.


That’s not to say that Oliver doesn’t try to help out his wife, but he does so in arguably the wrong ways. He’s convinced that Irena’s cat person fears are only in her head, so he sends her to a psychiatrist. [Be warned. There are spoilers ahead]. When watching the film, I felt like there was something off about this psychiatrist dude. It turns out, like Irena’s cat people phobia, this wasn’t just in my head. The guy’s kind of a creep, and at the end of the film, he tries to kiss Irena, which I don’t think would be looked kindly on by the APA. Until this moment, we’re not quite certain whether Irena’s cat people fears are legitimate or not, but sure enough, she transforms into a leopard and mauls her therapist. 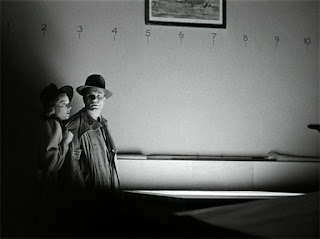 It’s easy to see why Cat People has become a horror film classic. First off, director Jacques Tourneur drapes the film in shadows, a technique he would use in the film noir classic, Out of the Past. (If you ever wanted to watch Robert Mitchum walk into a room and knock out some schlub with just one punch, then you really should watch Out of the Past). Oliver works for an architecture agency, so Tourneur makes great use of underlit drafting tables to create incredibly stark, nearly abstract chiaroscuro. Second, the film is thematically rich. From issues of hybridity, race, religion, immigration, science and medievalism, Cat People contains a whole host of themes in its brisk seventy-three minute running time.

Ultimately, it’s difficult to reduce Cat People down to a single message. While it certainly embodies America’s fear of the other as present in our anxiety over immigration, it also seems more sympathetic towards Irena than not. After all, the men in the film, her husband and therapist, ultimately fail her. She’s a monster, but she’s also the character who’s easiest to identify with. It’s not surprising that producer Val Lewton and director Jacques Tourneur, both of whom are immigrants, would take the point of view of Irena, and it’s unfortunately not surprising that the film’s exploration of America’s fear of immigrants who come from the Muslim world remains timely nearly seventy-five years later.
Posted by Tom Birkenstock at 10/22/2016 07:06:00 PM