There’s always been something dreamlike about point and click adventure games. In the traditional adventure game, logic is often foregone in favor of difficulty. Who hasn’t frustratingly clicked and combined every last item until something finally works? Before you know it, you find yourself felling a yeti with a custard pie or gluing cat hair to your face to complete an unconvincing disguise. These are the kinds of puzzle solutions that only exist in the twilight world of dreams, so it makes sense that the indie adventure game, The Dream Machine, takes place in the dreamworld.


The Dream Machine is the passion project from the two person crew of Anders Gustafsson and Erik Zaring who shepherded the game to completion over the course of seven years. Aside from the dream setting, the game is notable for its stop motion aesthetic. Gustafsson and Zaring built actual physical sets and claymation characters, giving the game a look unlike any other. 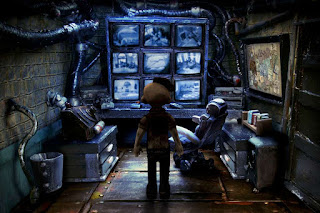 As you might imagine, the game begins in the middle of a dream. Protagonist, Victor Neff, is dreaming of being trapped on a deserted island. When he does finally wake up it will be some time until he returns to the dream world because the first chapter mostly takes place within Victor’s new apartment building. Newly married, Victor has just recently moved into an apartment with his pregnant wife, fully packed moving boxes providing evidence of their unsettled lives. But there’s something ominous about their new apartment. Victor soon discovers that the landlord, Mr. Morton, has installed hidden cameras in each tenant’s apartment.


We learn that Mr. Morton isn’t simply a voyeur; he’s actually experimenting on his residence using a contraption first invented by his grandfather, the titular Dream Machine. In the world of The Dream Machine dreams are another reality, which means all of our dreams are connected. Morton’s goal is to fully map the dreamscape, but in doing so the Dream Machine has established itself in the subconscious of each resident, meaning that Vincent must dutifully enter the dreams of his wife and neighbors in order to save them from Morton’s run away experiment.


Taking full advantage of the concept, each dream says something about the dreamer. Gustaffsson and Zaring have developed visually striking dreamscapes that appear to have been fished out of the netherrealms of the subconscious. You’ll find an apologetic teddy bear, landscapes that form faces, a cowardly vampire, and a shrinking ray that serves as a futuristic update of the edibles found in Alice in Wonderland. And you encounter all of these prior to the sixth and final chapter where the game most fully indulges in subconscious play and dream logic, including an homage to the end of 2001: A Space Odyssey and a notorious scene from Pedro Almodovar’s Talk to Her.

The Dream Machine’s divided into six chapters, and I found the third and the fifth to be the most successful. The third chapter takes place on a cruise ship inside the dream of Victor’s wife. Each employee on the cruise ship is another Victor, only differentiated by a numbered badge they wear. One of the Victors has gone missing, and you have to solve the mystery of his disappearance. In chapter five, you find yourself spanning two different dreams, one a rigid geometrical world of monochromatic squares reminiscent of the holodeck on Star Trek: The Next Generation, the other a woodland inhabited by fantasy creatures. The puzzles in the game are mostly intuitive, and even when I was stuck and leaned on online guides for help, I never felt like the puzzles were cheating. Overall, the game took me a little over twenty hours to finish.


From what I can tell, Gustaffsson and Zaring are based in Sweden, and you can feel the creators’ interest in outsider visionaries that give this indie game a particularly European flavor. The pair cite the psychiatrist John C. Lilly as a starting point. Lilly and his friends actually tried to map out the collective unconscious by writing down their dreams, apparently 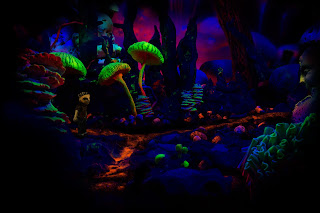 believing that the dream world was some alternate dimension. But I think the most immediate influence on The Dream Machine might be the work of Jans Svankmajer, a Czech filmmaker who combined claymation and live action in his surrealist films. Svankmajer’s probably most famous for his weird and wonderful take on Alice in Wonderland, simply titled Alice, which is widely believed to be the best film adaptation of Lewis Carrol’s fairy tale (sorry, Walt).

Like Svankmajer, Gustaffsson and Zaring’s claymation takes on dark shades in ways that are subtle. For the most part, you won’t find much explicit material in The Dream Machine, but it’s unsettling nonetheless. The character designs seem otherworldly even as the emotional components of the game are very much rooted in recognizable anxieties over parenthood, aging, and death. Ultimately, The Dream Machine is the kind of game that could only exist as a passion project. The arthouse and surrealist influences found within are not the kind of elements you would find outside of indie games. And it’s because of the indie economy that two artists could push the themes and aesthetics of the adventure game forward.
Posted by Tom Birkenstock at 12/04/2017 02:32:00 PM