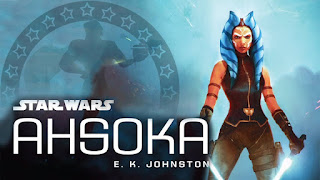 When Ahsoka Tano showed up in Star Wars: The Clone Wars movie, few expected much of the character. For older Star Wars fans, she seemed to be shoehorned into the film as an audience surrogate for younger viewers, which isn’t necessarily a problem except that the Star Wars series has had, at best, a mixed record when it comes to appealing to the younger set. But over the course of The Clone Wars TV show, Ahsoka proved herself to be one of the best additions to prequel era Star Wars. In 2016, E.K. Johnston wrote a standalone novel that follows Ahsoka after the close of The Clone Wars series, and the result is a highly enjoyable, if somewhat slight, look at how one of the last remaining Jedi survived Order 66.

Near the start of the novel, Ahsoka is living in obscurity away from the newly established Galactic Empire and anyone she may have known in her past life. Afraid that her Jedi past might be uncovered by the imperials, Ahsoka flees her makeshift lodgings on Empire Day, the one year anniversary of when Palpatine declared himself emperor. (I wonder if they still celebrate Life Day, or if that was outlawed when Palpatine came into power. I’m all for people celebrating Life Day, but I’m not sure it should be a galactic holiday, since it seems kind of religious in nature. I’m for the separation of church and empire). Eventually, Ahsoka finds a new hideout on the farming moon of Raada, tucked away in the Outer Rim.

On Raada, Ahsoka befriends Kaeden Larte and her sister Cietra. The two are orphans who were taken in by a group of farmers. This is actually a nice spin on the family assembled from outcasts trope, which usually form into some sort of gang of thieves like in Oliver Twist. The Lartes and the rest are good people. Ahsoka adopts the name Ashla and works as a mechanic. But just as she’s starting to get used to wearing a new identity with new friends, the Empire arrives on Raada. Soon Ahsoka and her gang of farmers find themselves forming a rebellion after the Empire takes control of farming production and hopes to squeeze more efficiency out of the population. Ahsoka and her allies form a band of guerillas, a development that mirrors her time working for the resistance on Onderon during the Clone Wars, which is even referenced here.

While on Raada, Ahsoka has had to hide her Jedi powers, and when she must finally use them, she decides to flee the moon rather than put her friends at risk. In the second half of the novel, we leave Raada, and Ahsoka even encounters Bail Organa who is in the midst of forming the Rebellion. I almost wish we had stayed on Raada and focused on the rebellion there, but perhaps E.K. Johnston thought this would be too similar to the Onderon arc on The Clone Wars. And while Ahsoka is a fun read and well plotted, it’s a young adult novel and sometimes suffers from the pitfalls of that category. The writing is sometimes prosaic, which is something you generally expect in Star Wars novels, but I’ll admit to cringing a little when a character’s hair was described as “very, very curly.” And you don’t get into quite enough of Ahsoka’s psychology. I wish Johnston had better laid out how Ahsoka reacted to both Order 66 and the Jedi’s betrayal of her.

But perhaps the most interesting moment in Ahsoka occurs towards the end when Ahsoka returns to Raada and rescues Kaeden from the Empire (for the second time!). While being whisked away to safety, Kaeden admits to Ahsoka that she’s in love with her. We never hear Ahsoka’s response, and the moment evaporates without further comment. Still, there’s something joyful about the fact that a female character can express her romantic interest in another female character in a young adult Star Wars novel. I’m of the belief that Johnston is able to slip this moment into the text because the Jedi code of celibacy provides enough room for maneuvering to allow creators and audiences queer these characters. This happened not too long ago when fans insisted that Luke Skywalker was gay.

Gender politics aside, Ahsoka is a fleet little novel that benefits from its limited scope. The title may have promised that the book contained the whole of Ahsoka’s history from Episode III to her appearance in (Spoilers!) Star Wars Rebels, but it’s really just one adventure among many. Hopefully this means that we’ll get more stories about what happened to one of the last remaining Jedi in the time of the Galactic Empire.
Posted by Tom Birkenstock at 6/30/2017 05:22:00 PM