Do Androids Dream of Electric Sheep?

Do Androids Dream of Electric Sheep? (4/5) 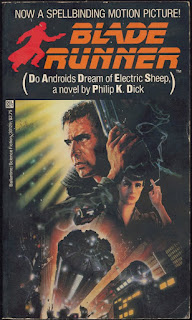 My beat up, yellowing copy of Do Androids Dream of Electric Sheep? from high school has the title Blade Runner in the familiar font in big, red letters up top. The cover features John Alvin’s instantly recognizable movie poster for the film. The only thing that suggests this book isn’t one of those once common movie to book adaptations are the words “Do Androids Dream of Electric Sheep, a novel by Philip K. Dick” timidly flanked by parenthesis. The inside even contains a disclaimer of sorts that reads: “PUBLISHER’s NOTE: In 1968, Philip K. Dick wrote Do Androids Dream of Electric Sheep, a brilliant SF novel that became the source of the motion picture Blade Runner. Though the novel’s characters and backgrounds differ in some respects from those of the film, readers who enjoy the latter will discover an added dimension when encountering the original work. Del Rey Books is proud to keep this classic novel in print.” It kind of sounds like Del Rey thinks they’re doing PKD a favor and that they’re worried people are going to be pissed when they realize the film is a departure from the novel.

With the exception of the very broad plot outline and a couple of scenes, PKD’s novel bears little resemblance to the cult classic film turned simple classic. As a reader who, like most of the planet, came to the novel through the film, I initially didn’t know what to make of Electric Sheep. At the time, I hadn’t quite gotten into PKD, and I wasn’t used to his writing, including the wild plot detours that only make sense when you realize he had to publish at an incredible rate and even relied on the I Ching to decide where to go next. Revisiting the novel many years later, it’s evident that Electric Sheep is one of PKD’s best and a superb introduction to his work.

Of all the changes between the film and the novel, the one that initially surprised me the most was the fact that the main character, played by Harrison Ford in the movie, Rick Deckard is married. Blade Runner borrows heavily from ‘40s film noir, so Ford’s version of Deckard is a loner with a drinking problem. But the first scene in the novel is Deckard bickering with his wife about which setting they should set their “Penfield mood organ” to. The mood organ functions like futuristic pharmacology, able to alter the user’s mood upon request. The only problem is that Deckard’s wife, Iran, doesn’t want to alter her depressed state. In his usual circular logic, PKD reveals that there’s a setting on the mood organ that makes you amenable to setting a new mood, which Deckard suggests to his wife to no avail. 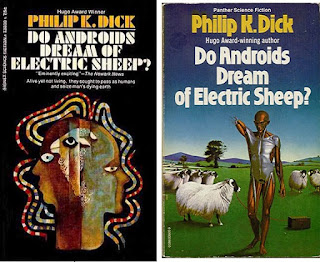 This first scene establishes Deckard’s blase middle class life, which seems at odds with his profession as a bounty hunter of replicants, or “andys” as they’re often referred to. But here Deckard’s just some middle class striver.  When you think of a bounty hunter, the first thing that comes to mind is a rugged, cynical individualist pushing against an irrevocably corrupt world. The world here is corrupt, and Earth itself is on its way to obsolescence after what’s known as World War Terminus (WWT), but Deckard’s still worried about keeping up with the Joneses. Because most animals on Earth have died off, it’s both the duty and a sign of social status for people to keep pets, but not necessarily domesticated ones. Those who can’t afford a real life animal try to blend in by buying electronic facsimiles. As members of the bourgeois, Deckard and his wife own an electronic sheep.

In PKD’s world, working as a bounty hunter isn’t as cool as it seems. When a group of Nexus-6 model androids escape and make their way to Earth from Mars, Deckard is given the assignment to track them down. The Nexus-6 are next level replicants, and by the time that Deckard receives the assignment, the escapees have already put the previous bounty hunter in the hospital. Because he’s not a police officer, exactly, Deckard is paid on commission and hopes that by taking out the rest of the replicants by the end of the day, he will have made enough to put  a down payment on a real, live goat to replace his faulty sheep. In this way, Deckard is kind of like the Willy Loman of bounty hunters.

The rest of the novel follows Deckard over the course of twenty-four hours or so as he hunts down his charges. Each time Deckard encounters an andy, he must administer the Voight-Kampff empathy test, because otherwise the replicants are indistinguishable from humans. The test involves hooking up nodes to measure individual reactions to a series of questions. Because the Nexus-6 are so advanced, Deckard tests out the test on a woman he’s told is a human, Rachael Rosen, at the headquarters of the Nexus-6 manufacturer. While Deckard is able to determine Rachael’s an android, there’s still a fear that one day it might be impossible to tell the difference between human and robot.

Deckard’s encounter with Rachael is taken nearly straight from the page to the screen, but the rest of the novel goes its own course. Because this is a PKD novel, there are a number of strange twists that don’t quite make sense when you think back on them. [Spoilers to follow in the rest of this paragraph.] At one point while trying to retire one of the androids, Deckard is picked up by police who are convinced he’s on a killing spree trying to kill actual humans. But these officers take Deckard to a police station he’s never heard of before. He eventually comes to the conclusion that either this is a mock station staffed by androids or the he himself is an android with fake memories. The police chief confirms that the entire building has been put together by androids as a sort of shadow precinct. The fact that a faux-police department is operating in San Francisco seems like a pretty big deal, but it’s never really mentioned again. PKD’s known for including irregular moments in his narratives that don’t quite make sense within the whole. These moments are like puzzle pieces that don’t quite fit without bashing them into place. This might upset newcomers to PKD, but for those on PKD’s wavelength, there’s something attractive to how his worlds fall apart. These moments of oneiric psychedelia unbalance the reader.

If there’s one theme that runs throughout the novel, it’s the concept of “empathy.” Humans and androids are differentiated by an empathy test. Most of the androids reveal a streak of cruelty at one point or another. The leader of the escaped androids, Roy Baty (spelled with one “t” in the novel), holds up with two fellow escapees in the apartment of J. R. Isidore who, like many, has suffered mental damage from radiation fallout. Baty and the others are cruel to Isidore, even though he’s clearly estranged from others because of his disability and suffering from loneliness. When they come across a rare living spider they torture it by tearing its legs off. The Voight-Kampff test questions often focus on harm done to animals, an especially egregious act in a world where few animals still live. 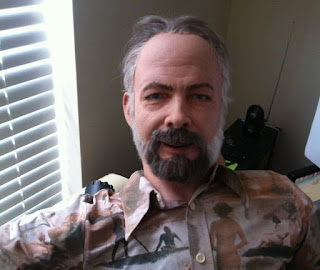 But of course there are exceptions. One of the androids Deckard must retire, Luba Luft, hides in plain sight as an opera singer, and he eventually finds her and kills her at an art museum. Before killing Luft, Deckard in an act of kindness buys her a book of Edvard Munch reproductions, and she confesses to Deckard that she never much liked androids. Luft’s love of art seems to make her different. Another bounty hunter, Phil Resch, forms a mirror image of Luft. [Spoilers for the rest of the paragraph.] At first, Deckard believes Resch might be an android with implanted memories, but it becomes clear he’s merely a vicious human whose job has eaten away at his sympathy for others. The encounter with Resch makes Deckard want to give up his life of killing lifelike humans for fear that he will wind up like this man.

Electric Sheep asks us to see what makes us human as relative. It suggests that what makes us unique is our ability to empathize with others, but this is not an constant trait. Our sense of empathy must be sustained. In Electric Sheep followers of the religion Mercerism connect to one another using “empathy boxes” where they can experience being the leader of this sect, Wilbur Mercer, as he ascends a mountain and his hit by rocks flung by unseen assailants. It may very well be that Mercer is a fraud, as is suggested in the novel, but the empathy boxes still function. As in Luft’s reproductions of Edvard Munch’s paintings, Mercerism is a facsimile that paradoxically sustains our authentic humanity.

PKD was a prolific writer, and Electric Sheep serves as a good introduction to his work because it catalogs some of his obsessions. It asks us to question reality and asks, What makes us human? Although overshadowed by Blade Runner, Electric Sheep shares only the most basic plotline with the film. They’re separate works of art that deserve to be taken on their own. Rereading Electric Sheep many years since I first came to it, I was surprised to see how much of the novel still resonates. Today, we live in a world where there’s a shortage of empathy. It’s not the whimper of a dystopia PKD paints, but our society has been hardened by hardship and uncertainty. Do Androids Dream of Electric Sheep? asks us to question the world we live in and to extend empathy to our neighbors.
Posted by Tom Birkenstock at 6/18/2017 09:27:00 AM